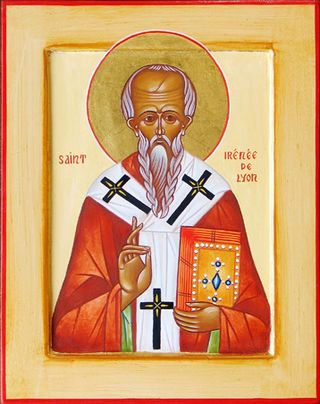 On 23 August of every year the Church celebrates the memory of an important saint and bishop of the second century Christian Church. St. Irenaeus was bishop of Lyons (Lugdunum) in the second century. Born c.a. 130 A.D.(1), he was to become an outstanding theologian and ecclesiastical leader; a true witness and propagator to the apostolic faith and apostolic tradition. He was an ecumenical man who, even though wrote against Gnosticism and Marcionism(2) always stressed unity. He was most probably born in Smyrna (3) but migrated to Gaul where he spent the mature years of his life and where he eventually died a martyr c.a. 202 A.D.

Irenaeus received a liberal education, becoming acquainted with both Holy Scripture and Greek philosophy and literature. He was greatly influenced by St. Polycarp from whom he received the seeds of the true apostolic tradition. Writing to the Roman presbyter Florinus, Irenaeus reveals this influence:

"For while I was still a boy I knew you [Florinus]...in Polycarp's house... I remember the events of those days more clearly than those that happened recently... I can speak of the place that St. Polycarp sat and disputed, how he came in and went out... the discourses which he made to the people... how he reported his influence with John and with the others who had seen the Lord."(4)

It is beyond doubt that Irenaeus was also well acquainted with Greek thought. He was very familiar with the writings of Greek apologists such as Justin Martyr (5) and Athenagoras whose works he sought to explain to the Greek-speaking world.

Irenaeus left Asia Minor and went to Gaul. He probably accompanied St. Polycarp to Rome in 155 A.D. and then continued to Lyons. Lyons was a great commercial city. It was "the country in which the arena was crowded with people... famous and held in higher repute than any in the land.' (6) It was situated on the Rhone River and was the centre of the Roman road system for Gaul. Intimate relations existed from very remote times between the ports of Asia Minor and Marseilles, which had been colonized from Asia Minor approximately six centuries before the rise of Christianity. During the Roman period, Levantine traders were regularly transporting their goods up the Rhone as far as Lyons. It was only natural that many of whom traveled and settled in Lyons were missionaries who brought Christianity to the pagan Gauls thereby founding a dynamic Church. Therefore even though Lyons was the second most important capital of the Western Roman Empire, it was still basically a Greek - speaking community. It was to this Church that Irenaeus came to serve as a presbyter. The first historical mention of Irenaeus is in 177 A.D. where he is a prominent priest in this area. During this time the Montanist controversy was raging in the Church of Phrygia. When this heresy reached Lyons a letter was written on this matter to Pope Eleutherius and which Irenaeus was delegated and entrusted to take to Rome. The letter, which on this occasion he took to the pope in Rome recommended him excellently;

"We have asked our brother and companion Irenaeus to bring this letter to you and we beg you to hold him in esteem for he is zealous for the covenant of Christ. For had we known that rank can confer righteousness on anyone, we should first of all have recommended him as being a presbyter of the church, for that is his position." (7)

Many scholars contend that as a result of being sent to Rome he escaped the terrible persecutions which broke out in 177 A.D. by the decree of the Emperor Marcus Aurelius (8). Aurelius was a dedicated pagan who vehemently persecuted Christians with "noisy abuse, blows, dragging along the ground, plundering, stoning, imprisonment...."(9) On his return from Rome Irenaeus was chosen to succeed Pothinus as bishop who had been previously martyred.

As bishop, Irenaeus saw himself as a successor of the apostles; a link between the historical person of Jesus and the contemporary Church. Like St. Ignatius of Antioch, Irenaeus saw himself as the centre of the Eucharist however he also saw himself as a teacher. Because of his confrontation with the Gnostics, Irenaeus placed appropriate importance to the continuity of teaching within the Church. (10) Since the Gnostics appealed to a secret tradition handed down by a secret succession of pedagogues, Irenaeus answered by appealing to the tradition openly promulgated in the four canonical gospels and to the unbroken public succession of bishops within a see. He saw himself as the one, par excellence, who taught the truth.

"We should obey those presbyters (11) in the Church who have their succession from the apostles, and who, together with succession in the episcopate, have received the assured charisma of the truth (certum charisma veritatis)."(12)

Irenaeus viewed apostolic succession as the true sign of continuity with the apostolic faith. He saw himself as a successor of the apostles, as alter apostolus (13) and therefore as someone who preserved the continuity of doctrinal teaching, the fullness of the Catholic faith and life.

When dealing with the heresies Irenaeus not only exposed and overthrew their teaching but also sought the orthodox interpretation and teaching as well. In spite of Irenaeus' interest in guarding his flock from the many heresies, his main preoccupation was the individual and his salvation. He was concerned with humankind's progress in order that he may achieve "the vision and enjoyment of God." (14) Far from being speculative, his theology whilst deep and complex, was certainly concerned with finding ways to help his flock apply it to their lives. Since Irenaeus main interest was soteriological, he worked hard to spread Christianity to the neighboring provinces of Lyons (15) as well.

The next historical mention of Irenaeus is between the years 189 A.D. and 198 A.D., concerning the celebration of Pascha (Easter). The Churches of Asia celebrated Easter on the fourteenth day after the new moon with which the month of Nisan began. The rest of Christendom held that the day on which the Resurrection could be celebrated was Sunday. The pope most probably sent letters to Asia Minor requesting councils to be convoked in order to discuss the proper day for the celebration of Pascha. Church councils were held in other provinces including Rome. The decisions of the councils were unanimous except for the province of Ephesus, Pope Victor was determined to bring about uniformity to the universal Church and he attempted to do this by suppressing the custom of Asia. He endeavored to excommunicate the Church of Asia as heterodox. To this decree Irenaeus answered and warned Pope Victor. Eusebius the historian relates that Irenaeus lived up to his name as 'peacemaker.'

"Irenaeus, whose name means 'peaceable' and who by temperate was a peacemaker, pleaded and negotiated thus for the peace of the churches. He corresponded by letter not only with Victor but with very many other heads of churches, setting out both sides of the question under discussion." (16)

After his incident with Pope Victor, Irenaeus disappears from history and it is believed that he died approximately 202 AD. It is not before Gregory of Tours that mention is made of his having died a martyr. There is debate amongst scholars as to his martyrdom since historians such as Eusebius make no mention of this event. (17)

What is important is not when or how he died but that through his writings, one has a valuable and authentic link to the apostles. One sees a man who had a depth of knowledge, a depth of faith, a love of scripture and God Himself. He was a "curious explorer of all doctrine" (18) as Tertullian described him. Just like a surgeon, when performing a major operation, Irenaeus too, through his writings lays bare the nerves and sinews so as to take his reader to the very heart of a heresy with the sole purpose of healing the Church from such disease. 'Orthodoxy' did not survive by right in the early Church, but because it had people like Irenaeus and to this lies a clue to his grandeur and to his vigour.

1. The precise date on which he was born cannot be determined due to the lack of sources, however modern scholarship tends to place his birth c.a. 130 A.D. The birth of Irenaeus has been placed as early as 97 A.D. by Dodwell and as late as 140 A.D. by others.

2. Gnosticism and Marcionism were two great heresies which the early Church encountered in its early history.

3. The evidence that he was born in Smyrna is implied by the fact that he had St. Polycarp as teacher in his youth. However the fact that Irenaeus was in Smyrna as a boy does not demand that he be born there.

5. Robinson, J.A., who is the editor of Demonstration of the Apostolic Teaching by Irenaeus argues that he studied under him in Rome as well.

10. Bishop Kallistos Ware, in his article "Patterns of Episcopacy in the Early Church and Today, An Orthodox View." in Bishop, But WhatKind^ p.11

11. By 'presbyters' Irenaeus means 'bishops,' A survival of the primitive New Testament usuage.12. Against the Heresies. IV, xxvi, 2