Interview: The Church of the Czech Lands and Slovakia 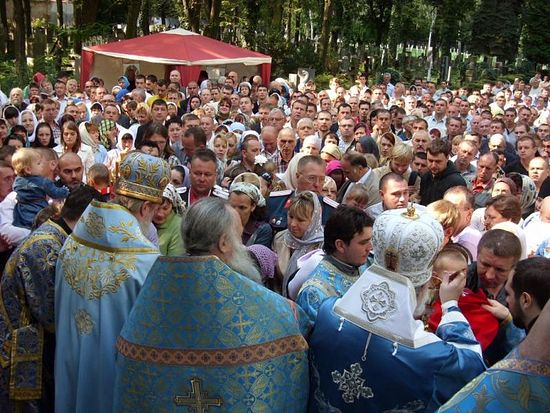 During the last week of August 2011, His Grace, Bishop Benjamin of San Francisco and the West and Archpriest Eric G. Tosi, OCA Secretary, visited the Orthodox Church of the Czech Lands and Slovakia. His Beatitude, Metropolitan Jonah, was to have joined them, but due to the repose of His Eminence, Archbishop Dmitri, he remained in the US.

Below, Father Eric shares his impressions of the visit with oca.org.

OCA.ORG: Father Eric, could you explain the context of the trip to the Church of the Czech Lands and Slovakia?

FR. E: It is customary that the Primate of an autocephalous Church visit the Sister Orthodox Churches after his election and enthronement. Metropolitan Krystof, the Primate of the Czech-Slovak Church, was among those who extended invitations to Metropolitan Jonah to make a fraternal visit and to share the Eucharist. While Metropolitan Jonah remained in the United States, due to the repose of retired Archbishop Dmitri of Dallas, Bishop Benjamin and I represented the OCA on the official visit. Also participating was Mr. Barry Migyanko, Bishop Benjamin’s assistant.

Such fraternal visits are important for the OCA in order to develop and strengthen contacts with the Sister Orthodox Churches. The Czech-Slovak Church is especially close to the OCA, as many of the OCA’s faithful – including Barry and me – trace their ancestry to the Carpathian area of central Europe, much of which is in today’s Slovakia. In addition, we are finding that there is much in common between our two churches. Both are minority churches in our respective countries. Both are multi-national, the OCA embracing parishes in the US, Canada, and Mexico, while the Czech-Slovak Church embraces faithful in the Czech Republic and Slovakia. And both are multi-ethnic, with the OCA serving faithful of virtually every ethnic origin, while the Czech-Slovak Church, in addition to serving faithful of Czech and Slovak origin, also serves faithful of Moravian, Carpatho-Rusyn, Bohemian, Lemko, Russian, Ukrainian, Hungarian, Serbian, Romanian, and other backgrounds. And both Churches have substantial numbers of converts to the faith. While our visit focused on Bohemia and Moravia, we did meet with a bishop and clergy from Slovakia.

It is also important for the OCA to engage in periodic face-to-face discussions, which are far better in strengthening ties than mere phone calls, e-mails, and casual encounters at other gatherings.

OCA.ORG: What are your general impressions of the Czech-Slovak Church?

FR. E: It was a bit of whirlwind. We, of course, had an opportunity to spend a lot of time with Metropolitan Krystof. We also meet Archbishop Juraj from southern Slovakia and Bishop Joakim, Vicar in Moravia. In Prague, we met the Ukrainian ambassador to the Czech Republic, while were welcomed by the Mayor of Brno, the Czech Republic’s second largest city.

We were struck by the youthfulness of the Church’s hierarchs, Chancellor, Secretary, and numerous clergy. The Czech-Slovak Church is clearly a “young Church.”

We were equally impressed with the three monasteries we visited, which offered a glimpse into the incredible life that they are developing. Many of the monastics come from various places in Czech and Slovakia as well as other central and eastern European countries. There is definitely a growing monastic movement, not unlike that found in North America. Finances, of course, are a difficulty, but the monasteries offer a wonderful witness to the faith.

We were surprised by the similarities between the Czech-Slovak Church and the OCA, as I mentioned earlier. Just as the OCA went through a transitional period decades ago which resulted in the widespread use of the English language in worship, they are striving to introduce the use of Czech and Slovak, in addition to Church Slavonic. A revival of traditional iconography mirrors that found in North America. And they too are seeking to find their voice in an extremely secular country. [It is said that the Czech Republic is one of the world’s five most secular countries.] Involvement of youth in Church life is a priority as well. But we saw that Metropolitan Krystof is a dynamic and beloved leader who is working through these, and related, issues.

It was also interesting to note that the Czech-Slovak Church also embraces a substantial number of converts, not unlike the OCA and other North American Orthodox jurisdictions. Curiously, this movement began much earlier than in North America, in the aftermath of World War I. There were villages throughout Bohemia and Moravia that saw a rise in Orthodox population through the conversion of local people. One village, we were told, had three churches – Roman Catholic, Protestant, and Orthodox. Amazingly, all three were established by the same man, who converted eventually to Orthodox Christianity.

After World War II, however, many of these villages were devastated and the Orthodox Christian population was resettled elsewhere, leaving few Orthodox Christians in those regions. Many of them, we were told, are young and have families, so there is hope that the Church can be revitalized by an entirely new generation.

We observed another interesting development. While in North America we have experienced a flight from cities to suburbs, thus generating the planting of many new parishes, in the Czech Republic the opposite is true, with people leaving the suburbs and villages for major cities, primarily to find work. This has necessitated concern for the establishment of new, urban parishes.

The major issue the Czech-Slovak Church is facing is a financial one. Every Czech citizen pays a state “church tax.” Citizens designate the religious community to which they wish their tax to be earmarked. Tax income is then used to pay the salaries of the clergy and to keep up the parishes. The government will be eliminating this system during the next year, so the Church will have to examine very closely new ways to fund its mission and outreach, salaries, and properties. Free will giving – something we are quite used to in North America – is a new concept, and they will need to understand financial stewardship in ways we take for granted here. Those with whom we met expressed an intense interest in how we fund and support our parishes and clergy, dioceses, and territorial Church.

OCA.ORG: What were some of the highlights of your visit?

FR. E: There were several highlights. The first was the Cathedral of Saints Cyril and Methodius in Prague. The cathedral is a national shrine to the victims of the Heydrich terror. During World War II, a Czech team assassinated the SS leader Reynard Heydrich in Prague, in what was known as Operation Anthropoid. They, along with some other special teams, eventually found refuge in the cathedral’s crypt. They were surrounded by Nazis and eventually killed. In further reprisals, two Czech villages were destroyed, with their populations murdered or sent to concentration camps. The World War II-era Orthodox Christian Bishop of Prague, Saint Gorazd Pavlik, was arrested, along with other Orthodox leaders. Offering his life on behalf of his flock, he was executed. We also visited Saint Gorazd’s home in Moravia. It should be noted that, through the efforts of our ecumenical team led by Archpriest Leonid Kishkovsky, funds were sent from non-Church organizations around the world to help build this shrine.

Another amazing site was the original location of the mission of Saints Cyril and Methodius in Mikulcice, Moravia. This archeological site contains the original churches and buildings of this 9th century capital. It is also the purported burial place of Saint Methodius. This rich archeological site is still being excavated, and in the future it is likely to yield some wonderful new information about this important era in the Church’s missionary history.

OCA.ORG: How has the visit strengthened ties between the OCA and the Czech-Slovak Church?

FR. E: A great deal. In fact, Metropolitan Krystof is planning to visit Alaska next summer. This is a long held dream of his, and Bishop Benjamin invited him to witness Church life in Alaska. Two of our villages in Alaska have had in the past missionaries from the Moravian Brethren, and recently Bishop Benjamin has established churches there. He named them after Saints Cyril and Methodius and Saint Rastilav, popular Moravian saints to remind them of their Orthodox heritage. So Metropolitan Krystof, prior to his election as Primate was the Bishop of Moravia, will have a wonderful opportunity to witness to the Orthodox faith in those Alaskan villages and bless their work.

In conclusion, it was a positive trip. Many common themes and issues were discussed. Of utmost concern is parish life and developing the means to strengthen the faith of the people. We found that we have many programs that can be shared and a great deal of information to exchange. It is also hoped that we can develop a youth exchange program so Orthodox young people from both Churches can experience Orthodoxy in another culture. Of course, finances, distance, and time are always critical, but it is hoped that much can be accomplished in the area of cooperation – and, as the old saying goes, “where there’s a will, there’s a way!”

A photo gallery of the trip http://oca.org/media/photos/visit-to-the-orthodox-church-of-the-czech-lands-and-slovakiamay be seen here.