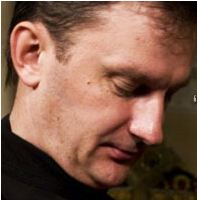 This is not your first trip to Australia; several years ago we wrote about your participation in the Choral Conference of the Australian Diocese.

- This is actually my third trip to Australia. I participated in the fourth and now sixth Church Music Conference.

- So you are well known in Australia—do you have many acquaintances here?

- Yes. I have a good number of close acquaintances and friends here.

- You are the choir director of Danilov Monastery, one of the spiritual centers of Orthodoxy in Moscow.

- Danilov Monastery is one of the oldest monasteries of Russia and the first one in Moscow, founded by Prince Daniel of Moscow in the 13th century. Now its role will grow yet more. We know that His Holiness Patriarch Kirill will soon move to his office to his residence at our monastery. Restoration work has been completed, and the Patriarch’s move will probably happen after the summer months. Then the monastery will become the official center of the Russian Orthodox Church, where both divine services and official meetings will take place.

- Tell us about your choir, who sings, do you perform anywhere besides church services?

- I lead the Holiday Choir of the monastery, which sings at divine services at the monastery on Saturday and Sundays, as well as feast days and holidays of the more revered saints and the icons of the Mother of God. Since there are a lot of holidays, we sing pretty often. The monastery has a few other choirs, too: a youth choir, a mixed choir from the choir-director school, a monastic choir which sings in church every morning and evening.

Our Holiday Choir has existed at Danilov Monastery for some 25 years. I came to sing about 20 years ago, and lead the choir for 18 years. We have 30 singers, all male. In additional to divine services, we participate in many trips and concerts throughout Russia, and the “near and far abroad.” We accompany, if we need to, His Holiness the Patriarch in his archpastoral visits to consecrate churches or for other ceremonies.

- In addition to singing, do your choir members work anywhere else?

- Singing in the choir is their main job. Some soloists also sometimes sing in operas or musical theater. But as our concerts are increasing, they have little time for anything else.

- Are the singers Orthodox Christians?

- Every one of them is baptized and most of the choir members attend church regularly, they make confession, take Communion—they follow all the church rules.

- How hard is it to gather professional singers who also know church singing?

- Yes, church singing is a distinct art, so there are various types of singing in our monastery, and our singers must be properly prepared. All of our singers have good musical educations. Singing in our choir, as opposed to other parish churches, is very demanding in a moral sense, and is physical labor, and not everyone is able to keep up. And quite a few male monasteries have opened in Moscow now, which have their own large choirs. So it has become difficult to find new people for a professional choir. Fortunately, we have a regular ensemble. Most of the participants have worked with me for some 15 years. This is good because over the years, we’ve built up a very large repertory.

- You mentioned that there are many monasteries in Moscow. The Sretensky Monastery Choir came here to Australia, and we liked them a great deal. What other strong church choirs are there in Moscow besides yours?

- There is a good male choir at Novospassky Monastery, and a male choir at the Moscow podvorie of the Holy Trinity-St Sergius Lavra. The Lavra itself has a wonderful choir, but I am listing only Muscovite choirs. There is another choir which was once called the Tretyakov Gallery Choir, now it is called the Moscow Synod Choir. This is a big a cappella choir of professional singers from various choir groups. All of these have their own repertories, their own role in the Orthodox service.

- Tell us, how did you get invited to the Australian Conference?

In 1996, in Moscow, I met a zealot of Orthodox choral music from Australia named Nikolai Nikolaevich Kovalenko. He visited Moscow to continue his studies at the Moscow Conservatory. Over the course of a year he attended courses in ancient Russian music, and, as a singer, came to sing with us in our choir. We became friends, and in a couple of years, after he returned to Australia, I suddenly got an invitation to attend the Fourth Music Conference. I was happy to accept.

There were still no direct contacts with the Russian Church Abroad, our differences had not been resolved. Not everyone agreed that I should participate, some considered me an unwelcome guest, since I represented the Moscow Patriarchate. Still, we discussed the positions held by us and by the Church Abroad and found a lot of common ground in overcoming our misunderstandings. I tried to prove that we weren’t enemies, but friends, and that we need to unite, so that our Church would become wealthier and stronger. Three years later I attended music conferences in America and Canada, then in 2008 I visited Australia once again and now this year I am participating in the 6th Church Music Conference of the Diocese of Australia and New Zealand. Now we are on a whole new level, because since the reunification of the churches we treat each other as equals, in a warm and brotherly atmosphere. Everything that has happened gives me great joy, as it does many of the compatriots I met during my first trip to Australia.

- What did you see at this conference, who also participated?

- There were people of different generations at the conference, from young men and women age 18-19 to more experienced people from 65-70 years old. Singers and choir directors from virtually all of Australia attended. Over sixty people sang in the choir.

The conference was a great success. I liked the professionalism of the speakers and the conference members. The speakers were mostly local, while there were among the invited guests renowned composer Fr Ivan Moody from Great Britain, who now lives in Portugal. He is a specialist in contemporary trends in church music.

Here in Australia there is no single system of holding divine services, in every church they serve the way they know how. So these meetings are especially important. We try to help with textbooks and advice. But we often cannot do this—the local choir directors must do this. Help is needed here on the part of parish rectors and clergymen, to give singers an opportunity to gather to learn.

In Australia, Orthodox churches play an important role. There is a large Russian emigration here which needs to be united. There is no better place for unifying Russian people than the local Orthodox church. This also helps preserve the Russian language among the young generations. Especially since the Australian government guarantees freedom for church life, and this freedom must be taken advantage of.

- Have you had the opportunity to sing with the conference participants at Melbourne’s Protection Cathedral?

- Of course, the goal of the conference is to learn the repertory of the divine service, that is, of all-night vigil and Liturgy. After the conference was over, then, on Saturday and Sunday a large choir sang in the Cathedral, led by several choir directors who studied the repertory with the choir.

- You spoke of the need for singers to gather every year in the various cities of Australia. Do we have choir directors who are proficient enough to head such serious gatherings?

- Yes, every city has its own podvizhnik. I call them that because in such circumstances one must be a laborer in the faith. In Russia it is easier, singers and choir directors there are paid. Here they are practically paid nothing, so one must truly love the art of church music. In Melbourne, this would be Nikolai Kovalenko, his colleague Dmitry Suprunovich, who both organized this conference. In Sydney, Andrei Laptev is a remarkable choir director, in Brisbane, it is Sasha Paramonov. It is good that there are such parish rectors as Fr Nicholas Karipoff in Melbourne, Fr George Lapardin in Sydney, Fr Gabriel Makarov in Brisbane, who are able to unite young people around themselves. In general, I noticed that in Australia, there is a well-organized youth movement. These priests and other clergymen, I couldn’t even name them all, of course, can help choir directors a great deal.

- Thank you, I regret that I couldn’t have been in Melbourne to hear the choir sing at Protection Cathedral. I hope the next conference is not in the distant future.