We Have Thrown our Souls to the Garbage Dump

An interview with Metropolitan Pavlos of Sisanion and Siatista

Metropolitan Pavlos of Sisanion and Siatista, born in Chalkida-Evia, who has dedicated a great deal of time to social service, has spoken his mind in an interview with the Greek news agency Romfea concerning the problems facing the Greek public and the Church.

One must note, however, that although Greece's economic crisis is in the spotlight these days, the metropolitan's words are not only applicable to Greece. One could say that they accurately describe our global human condition. 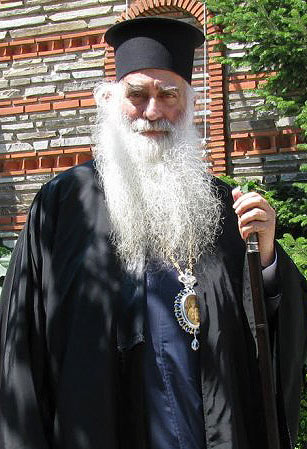 —Your Eminence, the crisis we are facing today—is it the consequence of the actions of our current government, formers governments, or is it a crisis of the modern system (capitalism, globalization)?

—Obviously, our government is not responding to the current crisis. The government, which considers politics more important than the country's true interests, does bear responsibility. We must recognize that measures are being taken and changes are being made that should have been done twenty years ago.

Why didn't we take these measures in time? Many of our current political leaders were members of the government during various times. One of the ministers of the current Greek government admitted in an interview that he acknowledge the responsibility of the political group to which he belonged, and their political activities. Of course, a huge responsibility lies upon the whole system. The key question is: Does the economy exist to serve man, or does man exist to serve the economy?

Man has become a faceless cog in the economy. The system is at fault for that, and its fault is enormous. Today we no longer talk about fairness—we talk about interests, and that is a decline in the system and in our culture.

—What risks are we faced with today? Does a plan exist for de-Hellenization, and if so, who has devised it?

—Do you see how they disdain our country? Do you see its humiliation? Of course, we bear the responsibility for this above all. We gave them the right. But these events have bared the thoughts of many hearts. Today an attempt is being made to make us a state with a different character.

An attempt is being made to devaluate and distort our history—here are just a few examples: excluding national history from school programs, a new series about the revolution of 1821 (the Greek war of independence), and so on; they are continually humiliating the Church, debasing her role; destroying the language… All of these are obvious signs of efforts being made.

—Are the Prime Minister's intentions noble, and was there another political path?

—I think that the Prime Minister's intentions are noble. The Prime Minister has no right to failure, and a huge responsibility rests on him not to lose. I cannot say specifically that another way is possible. But the people feel that the weight of the crisis is not being spread proportionally. For example, failing to pay taxes is an act which injures both state and society.

—Your Eminence, should we be cautious about the new electronic identification cards, and why? What is your position on the question of "the mark of the devil", the number "666", and in general, everything being written about bar codes and electronic cards?

—As for the electronic identification, the question is: what is this card, and how will it be introduced? One of the main postulates of Orthodox theology testifies that a human being is a personality, co-participating with God. Anything that violates human personality and God-given freedom is unacceptable.

What will the electronic card be? An ordinary document, or a means of control over people? If the card will contain information about the owner that he does not know about, then this is a debasement of the individual and violation of human freedom.

If the information there will be accessible to the owner, then this will simply be a new form of personal identification. The Holy Synod of our Church has requested complete information from the government on this matter; it has requested them to present the corresponding proposed legislature, in order to have an opportunity to study it and make a fully responsible decision.

As for the "mark of the devil"… We all need to be attentive in order to understand where is truth, and where is exaggeration, where is error. Haste and impetuousness is dangerous here. Nevertheless, the Church is competent to express her opinion on this matter through her hierarchy.

However, we must note that although the government is sympathetic to those who decline to serve in the army, it does not find any understanding for those Christians who are faced with things that go against their conscience, even if they are exaggerating the scope of the problem.

—What do you think—should the Church have its own "political word"? Should it be drawn into political action?

If, for example, the state accepts a law that allows abortions, or that destroys the institution of the family, should the Church's dissent be taken as interference in politics? Let's be serious. Talk about "interference in politics" has only one aim—to force the Church into silence. The Church has the inalienable right to address its flock, the people of God. Any other way of construing it smacks of totalitarianism.

—Are the hierarchs partisan? If so, then is this lawful?

The hierarchs have no cause to be partisan. Partisanship is a grouping, a rejection of the whole and the belonging to a particular group. On the other hand, the Church's differing opinion on a number of questions does not mean opposition. The Church does not create coalitions or oppositions.

The Church respects the government, which the people have chosen to fulfill its duties. She works with them, if they want this, and testifies to the truth, regardless of what this may cost her.

—Does the Church help everyone in any way it can, or could it do more? Perhaps the Church's activity is insufficient, or not correctly publicized?

Of course, the Church is also helping people in these difficult times. In every parish, parishioners help in various ways: they create volunteer groups, and give financial help.

You have heard that the archbishopric of Athens has doubled the ten thousand meals that it distributes up to the present time to all the needy. Without the daily care of the Church in Greece, there would possibly have been an explosion in society.

The Church is not interested in publicizing its activity. People who have been helped know about her work. Sometimes she is forced to speak about it, but that only happens when her activity is maliciously called into question. The Church cannot talk about her services all the time.

For example, how should she report the action of a priest who took out a loan in order to help a sick person, to save someone's house from repossession so that the children would not be thrown out into the street, or so that a child would be able to continue his studies?

Obviously, that priest will be paying off the loan with his own salary. But this cannot be told, it cannot be put out for show. When a priest feels that he is a father, then he does this with love, and seeks out all possible ways to help his children. The condemners easily speculate on people's need, but they will never open their own wallets for them.

In a recent interview, the Archbishop of Athens said very succinctly that the state has taken away 96% of the Church's property. Regardless of the final court decisions according to which the remaining 4% should belong to the Church, the government has through various means prevented the Church from utilizing it. The Archbishop also announced that he wants to use this property for social programs, and has clearly demarcated the boundary where public interference ends. Who is afraid, and why are they afraid of the Church, which fully participates in community life?

—Are the skin color, nationality, or religious affiliation of those who need help taken into consideration?

—Of course not! And the Church proves this every day by its care for every person that has a need.

—What is your personal position on the question of illegal immigrants and the creation of barriers to stop the flow?

—This is an extremely onerous phenomenon created by bad politics. Every illegal immigrant, just like any person, is an image of God. And we have the possibility to help them. The world's injustice forces people to seek such a solution to their catastrophic situations. But here is the question: Do they come to us of their own accord? Or is someone sending them to us? There are many questions that definitely need to be answered in order to gain a clear picture of the problem. I suppose that creating barriers is not the solution. I agree with Alexandrian Metropolitan Anthimos's concern about this issue.

—Tell us, how can we get out of the crisis?

—We need patience, calm, unity, seriousness, sacrifice, and we need to discuss the problems that are arising. We also need a sober evaluation and discussion of the economic condition; and, of course, we do not need arrogance from the rulers, but rather their understanding, sincerity, and dialogue. We also need to listen to the voices of those who have found themselves in difficult situations and want to assert their positions.

It is important to understand that this crisis is primarily a spiritual one, and only secondarily an economic one. If we do not understand this, then it will definitely be problematic for us to get out of it. We have lost the meaning of our lives. We have made it consist in the present, transferred the meaning of life to prosperity and happiness.

We have forgotten Christ's words: Man shall not live by bread alone, but by every word that proceedeth out of the mouth of God(Mt. 4:4). And we have become easy prey; we swallowed the bait of those who promised us bread and prosperity. We pushed God and truth off to the side, and as a result, we have succeeded in only one thing: we have thrown man into the "garbage dump." It is painful to look truth in the eye, but without doing so, we can't be saved.

How do we live, what meaning of life do we serve? Man's theosis, or his debasement? The answer to this question is our escape from the dead-end. We see how so-called globalization does just that—it soils, debases the human being.

The great Dostoevsky put the dilemma like this: "Freedom, or happiness?" We strove to attain material well being, and we lost our own selves.

The incarnation of God is the measure of the value of a human being. Ascesis is the path to freedom, temperance is the revelation of what is essential.

I suppose that the main cause of the present, all-encompassing crisis is that we have thrown our souls to the garbage dump and considered this "deed" to be our accomplishment. If we regain our soul, and place it at the center of everything, we will be able to return to the sources that can save us.

Translated into English by OrthoChristian.com
from an abbreviated version in Russian