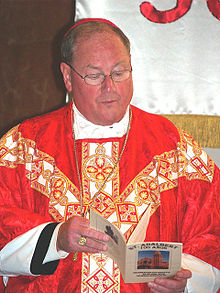 As the Obama Administration continues the efforts of the radical Left to redefine terms such as “marriage” and “family” to the point where they have been emptied of their historic meaning, traditionalists are becoming increasingly vocal. New York Archbishop Timothy Dolan’s (left) September 26 talk — “The Ring Makes a Difference” — is one of the most prominent statements in opposition to such efforts at undermining the historic, traditional understanding of marriage. The archbishop denounced the effort to ‘redefine’ marriage, declaring the effort to promulgate the notion of “same-sex” marriage as an “ominous threat to religious liberty”.

Archbishop Dolan spoke this past Monday as part of a panel discussion in Poughkeepsie, and an article for the Poughkeepsie Journal reported that Dolan and other speakers emphasized the threat which “same-sex marriage” poses to the country:

Dolan framed criticism aimed at the Catholic Church and opponents of same-sex marriage as an "ominous threat to religious liberty," warning of what he called "aggressive secularism."
He said, "America needs and depends upon a vigorous free exercise of religion."
Dolan placed his hand on his chest.
"We need to recapture the awe, the wonder, the dignity of marriage," he said. "For many of our people, marriage has lost its luster."
Dolan's point was driven home by Bradford Wilcox, director of the National Marriage Project at the University of Virginia, whose presentation included statistics from the 2010 study "The State of Our Unions, Marriage in America," jointly published by the National Marriage Project at the University of Virginia and the Center for Marriage and Families at the Institute for American Values.
"Marriage is most in trouble in middle American groups and the poor," he said, gesturing to a bar graph that showed 46 percent of marriages ended within the first 10 years among poor families.

An assault on the family — including repeal of the military’s “don’t ask-don’t tell” policy and abandonment of the Defense of Marriage Act (DOMA) — has been a fundamental element of the policies of the Obama administration. As Daniel Sayani wrote for The New American in February of this year:

While the Obama administration’s decision to stop defending marriage as existing between one man and one woman indicates a break with its former policy on the issue, a closer analysis shows that President Obama has a long history of gay/lesbian activism, unconstitutionally usurping traditional definitions of the family.

Marriage is not the only “family” issue suffering a frontal assault by the Obama administration. The U.S. Conference of Catholic Bishops (USCCB) recently took the extraordinary step of issuing a very strongly worded statement in response to efforts by the Department of Health and Human Services (HHS) to strip any meaningful “religious exemption” clause from implementation of “Obamacare.” As reported earlier this week for The New American, the USCCB found that HHS policy would attempt to coerce Roman Catholic health care providers to violate the teachings of their church by requiring them to provide abortions, abortifacient drugs, and contraceptives.

With the institution of marriage under assault from several directions, the concerted efforts of the Left are directed toward either keeping marriage from leading to families, or creating mockeries of marriage which are, by definition, barren. With the administration waging war on marriage, Archbishop Dolan responded to the president’s actions in the strongest possible terms; according to CNSNews, he declared that President Obama’s actions were, in fact, a threat not only to families, but to Church and State, as well. In Dolan’s words:

Thus, the comprehensive efforts of the federal government—using its formidable moral, economic, and coercive power — to enforce its new legal definition of ‘marriage’ against a resistant Church would, if not reversed, precipitate a systemic national conflict between Church and State, harming both institutions, as well as our Nation as a whole...

Far from the administration responding to such concerns regarding the fundamental institutions uphold the Republic, CNSNews’ Terence Jeffrey explains that it appears Mr. Obama actually went even further in his assault on marriage in the aftermath of the recent rebukes from the Roman Catholic Church:

In his letter last week to the president about the marriage issue, Archbishop Dolan indicated that the only “response” he and Cardinal George had received from their previous communications was a stepped up attack on marriage by the administration.
“This past spring the Justice Department announced that it would no longer defend the Defense of Marriage Act (DOMA) in court, a decision strongly opposed by the Catholic Bishops of the United States and many others,” the archbishop told the president.
“Now the Justice Department has shifted from not defending DOMA—which is problem enough, given the duty of the executive branch to enforce even laws it disfavors—to actively attacking DOMA’s constitutionality,” the archbishop said.

No doubt a fight with the Roman Catholic Church would play well with large elements of Mr. Obama’s ‘base’ of political support, since anything he could do to anger traditionalists and social conservatives would please many of those who are funding his bid for reelection. Perversely, Mr. Obama has much to gain from inflicting losses on the fundamental fabric of American society; the agenda he has pursued to date has waged war on the religious principles of his opponents, and he shows little sign of an interest in doing otherwise. While the political elites attack the roots of civilization — roots which are sunk deep into the Church, the State and the Home—those who would seek to defend to framework of human society can readily attest to the devastation which has been wrought upon those roots in recent years.