The Conception of St. John the Baptist 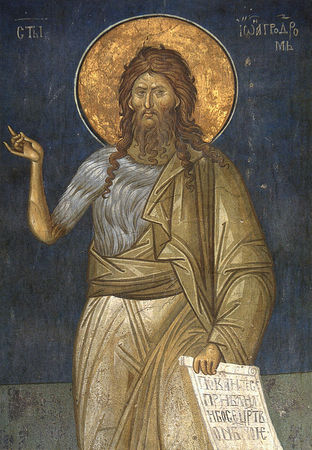 St. John the Baptist.
The Conception of the Venerable Prophet, Forerunner and Baptist of the Lord, John: The holy Prophet Malachi prophesied that before the Messiah's birth His Forerunner would appear, and would indicate His coming. The Jews therefore in awaiting the Messiah also awaited the appearance of His Forerunner. In a city of the hills of Judea in the land of Palestine lived the righteous priest St Zachariah and his wife St Elizabeth, zealously observing the commandments of the Lord. The couple, however, had a misfortune: they remained childless in their old age, and they prayed unceasingly to God to grant them a child. Once, when St Zachariah took his turn as priest at the Temple of Jerusalem, he went into the Sanctuary to offer incense. Going behind the veil of the Sanctuary, he beheld an angel of God standing at the right side of the altar of incense. St Zachariah was astonished and halted in fear, but the angel said to him, "Fear not, Zachariah, for your prayer is heard; and your wife Elizabeth will bear you a son, and you shall call his name John." But Zachariah did not believe the words of the heavenly messenger, and then the angel said to him, "I am Gabriel, who stand in the presence of God; and I was sent to speak to you, and to bring you the good news. Behold, you will be silent and unable to speak until the day that these things come to pass, because you did not believe my words...." Meanwhile, the people were waiting for Zachariah and they were astonished that he had not come out from the Sanctuary after so long a time. And when he did come out, he was supposed to pronounce a blessing upon the people, but could not do so because he had been struck speechless. When Zachariah explained by gestures that he was unable to speak, the people then understood that he had experienced a vision. The prophecy of the Archangel was fulfilled, and Righteous Elizabeth was delivered from her barrenness, and gave birth to John, the Forerunner and Baptist of the Lord.

On this day are celebrated God's mercy, His wondrous act and His wisdom: His mercy towards the devout and righteous parents of St John, the aged Zacharias and Elisabeth, who had all their lives begged a child of God; the wonder of the conception of John in Elisabeth's more-than-aged womb; and the wisdom of the dispensation of man's salvation. For John, God had a specially great plan: that he should be a prophet and the forerunner of Christ the Lord, the Saviour of the world. Through His angels, God revealed the birth of Isaac to the childless Sarah, and of Samson to the childless Manoah and his wife, and of John the Baptist to the childless Zacharias and Elisabeth. Through His angels, God revealed the birth of those for whom He had a special plan. How could children be born of aged parents? If someone is curious to find out, let him not ask men, for men do not know, nor does natural law (it being beyond natural law), but let him turn his gaze to the power of almighty God, who made the whole world from nothing and who, for the creation of Adam, the first man, used no parents, either young or old. Instead of being curious, let us thank God that He often reveals to us His power and mercy and wisdom beyond the natural law, by which we would otherwise be fettered and, without these special wonders of God, would fall into despair and forgetfulness of Him.

From The Prologue From Ochrid by Bishop Nikolai Velimirovich
©1985 Lazarica Press, Birmingham UK

Editor12/26/2020 11:14 pm
Carolyn: Although this article on the Conception of St. John the Baptist does not spell it out, in other sources it is more clear that Zachariah and Elizabeth were simply informed by the angel that Elizabeth would conceive in her old age, but that they went to each other, and she conceived. It is not Orthodox Christian doctrine that Elizabeth conceived by the Holy Spirit as did the Virgin Mary. St. John was conceived in the ordinary, natural way, but miraculously, since Elizabeth was aged and barren.

Carolyn Smith12/26/2020 8:21 pm
It appears from your reading that John's conception was through the Holy Spirit to Elizabeth and not through the conception of his parents because of their age, the same as our Lord Jesus Christ was conceived to Mary and Joseph. If that being the case how is John the Baptist accountable for his sins. This is confusing because it appears John the Baptist knew no sin of his own
×