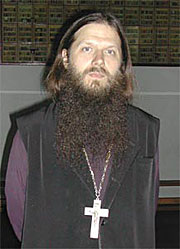 Archpriest Artemy Vladimirov. My friends, take a look at the faces of the people around you! Why aren't they all bright, joyful, and cheery? One person has an expression of perpetual sadness and sorrow, another has a stony mask of egoism and indifference, a third bears the stamp of crude, sensual passions. They say that a person looks like the one he serves. Sometimes when you look with a compassionate shudder at the face of a miserable drunkard, you can't help but think: Isn't the devil himself tyrannizing that soul? It has become so dark and unsightly, as if it has lost its human image.

What makes the servants of the Lord, the servants of the God of heaven, true Christians, different from the children of this age? The wise King Solomon says that even the face of a pious man shines. His royal father, the holy Prophet David, adds, The light of Thy countenance, O Lord, hath shined upon us (Ps. 4:6). The gift of the Holy Spirit given to us in the Sacrament of Baptism has placed a bright mark upon our whole being—in the hour of our spiritual birth in the baptismal font, the soul was wondrously illumined, as if it had been clothed in garments of grace, white as snow. The body was also fortified, and we were granted a blessed union with the Resurrected Savior, Christ. A marvelous source was revealed in our hearts, from which the living water of God's grace streams and bubbles, satisfying the immortal human soul.

But to our great misfortune, not every one of us has preserved this baptismal purity of soul and body. Some have not received an education in the faith, others have fallen under bad influences, not having discerned who they should and shouldn't befriend, while others, because they have long stayed away from the sacrament of confession, have again allowed evil thoughts and desires to enter their hearts, and have become captive to sin. The holy spring of grace has come under a heavy bushel of vices and passions. The only thing that can give us spiritual freedom once again and awaken God's grace, which has hidden its activity due to our unworthiness, is deep, sincere confession and prayer. We will talk about the latter more substantially in this chapter.

Prayer is often called the breath of life. Just as breath in the nostrils shows that the body is alive, so does the prayer of the mind and heart to God testify that the grace of the Holy Spirit has not completely abandoned a person. Prayer has nothing in common with dreams and fantasies, as some, who are not at all acquainted with the essence of the matter through their own experience, think and try to persuade others. Prayer does not mean talking to yourself, self-suggestion, or meditation; it differs radically from those forms of interior life. Not even thoughts about God can be called prayer, for it is one thing to think, and entirely another to pray. Prayer is a thought addressed to God. Not only thought, but also the heart and will. Isn't it about this total turning of a human being to God in prayer that the greatest commandment of the Law speaks: Thou shalt love the Lord thy God with all thy heart, and with all thy soul, and with all thy strength, and with all thy mind (Lk. 10:27)?

Prayer is labor, and probably nothing equally laborious can be found. No sooner do you go to pray than thousands of pressing, major and minor affairs come up requiring immediate attention. You begin the prayer itself, and out of nowhere comes a whirlwind of thoughts, such a distraction that you can't help but apply the beginning of Pushkin's famous poem to yourself: "The sky is covered by a storm of darkness, the whirl of snowstorms…" It is always easier to talk about prayer than it is to do it. 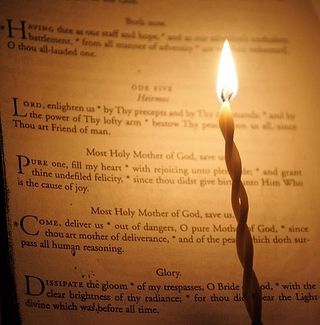 First, this sacred work requires constancy. You won't take anything by storm here. Some take up the ascetic work of prayer with heat and fervor, but very quickly cool towards it, forgetting that laziness always follows at the heels of impetuosity. When it comes to teaching yourself to pray, the old saying very much applies: "Slow and steady wins the race." It is easy to imagine the essence of the matter by using the example of two lumps of coal. One is red and blazing hot—that is prayer itself; another is black and completely cold—that is our heart. If you simply place the two coals next to each other and let them be, then the first will cool down while the second will ignite. Thus, those who think that there is no sense praying if you don't feel like it are quite mistaken. "I am not in the mood to pray today—it would be insincere," they say, and put the prayer book aside for a day, then a month, and even for many long years. The kingdom of heaven suffereth violence, and the violent take it by force (Mt. 11:11), Christ the Savior calls us to force ourselves and increase our efforts in the labor of prayer. The Lord God Himself promises to give prayer to the soul that prays.

If we want to warm the coal, then after bringing the coals together, we must patiently blow upon them and wait for them to ignite. If you blow too hard and impulsively, sparks will only fly from the hot coal, and nothing else will happen. We have to admit that impatience harms the work of prayer more than anything else. Some want to begin to pray today, and reap the spiritual fruits tomorrow—to be free from the passions, have grace abiding in the heart, the gift of Divine love, and be nigh unto wonder-working. Such, if I might say, "Jack-be-nimbles" never obtain anything good and can even become sick with pride or fall into despair. But if we add time to patience, unite constancy with discernment, leaving it to the Lord to crown our small but persistent labors with grace, that grace will not keep us waiting. Seeing the courageous heart of His disciple who is not despondent over the natural difficulties and perplexities, God will soon warm our hearts. The cold and lifeless coal will little-by-little take on the warmth and light of its fiery neighbor. So also does the heart of a continually praying person, gradually purified of its passions, is warmed with tears of repentance, and finally begins to radiate the brightness of Gospel love and joy. My heart grew hot within me, and in my meditation a fire was kindled. I spake with my tongue… (Ps. 38:4); this is how King David describes that state.

Inner enlightenment given through prayer changes a person radically. From attentive and constant prayer, the mind and the heart become more sensitive to goodness and less willing to make peace with evil. The latter can be recognized not only in words, but in feelings and thoughts. In the soul of a Christian a loathing and hatred awakens for sin in all its manifestations.

The rebirth of the soul and its enlightened state are transmitted to the body. A prayerful life does not like a relaxed body. Look at a candle, how it yearns upward to God, breathing light and warmth! So must we stand upright when praying, not slouching, but rendering honor to the Creator not only with our spirit but also with our bodies—reverently making the sign of the cross, bows from the waist, and full prostrations.

It is easy to recognize the Christian who is inspired by secret, ceaseless prayer, and experienced in spiritual life. His or her face is bright and pure, eyes peaceful yet joyful, movements calm and unhurried, yet not sluggish. Attentive to himself, watchful of his own heart, the prayerful soul is filled with affability and the desire to serve his neighbor to the glory of the Lord. He who prays cannot be an obtrusive, quarrelsome, hard-to-get-along-with person. To the contrary, he does not like to push his own opinion, because "grace does not force", as pious people of old used to say. When a godly person appears among worldly people who are far from the spiritual life, the spirit of idle talk immediately departs from their conversation, and they especially refrain from indecent or unchaste joking in his presence. Furthermore, the Christian who is disposed to prayer is alien to lecturing; in general he does not like to put his piety out for display, but instead carefully hides it from others. True prayer delivers the soul from irritability and displeasure; to the contrary it motivates the soul to thank God for everything—both the good and the sorrowful; for nothing happens to us by accident, and everything that happens serves for our benefit. As they say, "No matter what God gives us, it is good."

How beautiful is the cherry tree in spring! Covered like a bride with snow-white garments, with its subtle, barely discernible fragrance it draws the bees that gather up the fragrant nectar. The Christian who has acquired the Holy Spirit is unusually attractive to people around him. Not clearly understanding why, they long to associate with him, for they sense the truth of his words confirmed by his benevolent way of life. Such a person can be a teacher, even though his lips are silent. They say that a bad example is infectious. But the good example of an individual who abides in prayerful union with the Creator possesses an invincible strength. Acquire ceaseless prayer, and its translucent waters will bedew your heart, and will then flow across the universe, quenching the thirst of all—both the righteous and the sinners—who thirst for faith in Christ the Redeemer.