Homily on the Day of the All-Praised Apostle Andrew the First Called. Man’s true, Eternal Riches 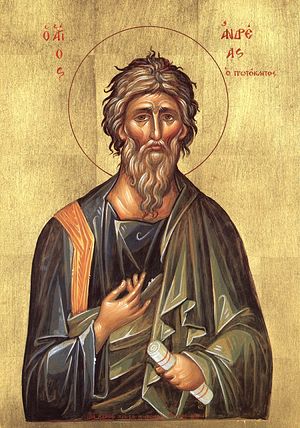 St. Andrew the First-Called
Today we celebrate, my beloved, the memory of St. Andrew the First-Called. He has been given that name because he was the first to be called by Jesus Christ to be an Apostle. It happened like this: Soon after the Lord’s baptism by John in the Jordan, John stood on the banks with two of his disciples, John and Andrew; and when he saw Jesus coming, he said, Behold the Lamb of God. Hearing these words from him, both disciples followed after Jesus. When Jesus turned and saw them walking, He said to them, what do you need? They said to Him, “Rabbi,” which means teacher. “Where do you live?” The Lord answered, “Come, and see.” They went and saw where He lived, and stayed with Him that day. It was about the tenth hour, about 4:00 in the afternoon by our reckoning. One of these two who heard about Jesus from John and followed him was Andrew, the brother of Simon Peter. He first found his brother Simon—that is, Peter—and said to him, “We have found the Messiah,” which means, Christ, and led him to Jesus.

Another time, Jesus was walking near the Sea of Galilee and saw Simon and his brother Andrew casting a net into the sea, for they were fishermen. The Lord said to them, “Follow Me, and I will make you fishers of men,” and they immediately left their nets and followed Him. This is what the Apostle and Evangelist John the Theologian and the Evangelist Mark say about Apostle Andew’s calling (Jn. 1:35–41 Mk. 1:16–18).

Staying with Christ for one day and hearing from Him the words of Divine wisdom and the economy of our salvation, the Apostle Andrew left everything he had in the world—house, family, fishing, and his entire meager fortune, and became a man with no possessions, acquiring the most precious, irreplaceable and eternal treasure—faith in Christ—following Him zealously, without turning back, until the end of his life.

Why are some churches in Russia built in honor of the Holy Apostle Andrew? Because he is our Russian Apostle, as we know from reliable tradition and history and from the chronicles of our Russian chronicler, St. Nestor of the Kiev Caves. He says that the Apostle Andrew sailed along the Dniepr River with his disciples and reached the hills of Kiev, went ashore with them climbed to top of the hill, then still uninhabited, erected a wooden cross and told his disciples in a prophetic spirit: Do you see these hills? Upon them the grace of God will shine, and there will be a great city here, and God will erect many churches here. According to a reliable tradition, he preached in many places in what is now Russia which were not called Russia then, because there was no Russian nation at that time. The people were called Scythian, and the nation was rus’. Thus, the Apostle Andrew is to a large extent an Apostle of Russia; and there is a church dedicated to him in Kiev, in St. Petersburg, in our Kronstadt, and in various other places in Russia. The highest order of St. Andrew, which belongs inseparably to the members of the Royal House and is granted to high-ranking persons who have earned it, is named in his honor.

Having given this preface, now let us talk about the words of the Apostle Andrew stated at the beginning about the apostles in general: As having nothing, and yet possessing all things.

What does it mean to have nothing, but at the same time possess everything? It means not having any earthly inheritance or property—no house, no money, no extra clothing, no worldly ties, no worldly friends, helpers or intercessors, no worldly teachers, no doctors in case of illness; in a word, no earthly provision whatsoever; not to have even the tiniest passionate attachment to anyone or anything earthly, even to a mother or father—to nothing that attracts and binds ordinary, worldly people to the earth. What does it mean to possess all things? It means to possess first of all God’s grace and various divine gifts: the gift of the grace-filled, all-conquering and all-subjugating Word, the gift of faith, the gift of perfect love for God and neighbor, the gift of God’s peace in the soul, the gift of higher life on earth—carefree, full of complete hope in God about everything; the gift of all manner of miracles—to heal illnesses, cast out demons, raise the dead; to hold every earthly sorrow, affliction, and life itself in contempt as transitory and succeeding to eternal life. This is what it means to possess all things. Truly, having nothing on earth and no passionate attachment to anything earthly, the Apostles possessed everything—all spiritual riches, all spiritual power; all spiritual consolation. They counted everything earthly as rubbish, dust, and vanishing smoke, because they had God Himself living in them, working countless miracles through them and saving through them a countless multitude of people. They possessed the whole world and commanded all creatures: they cast out demons, healed all illnesses, trampled upon death, and resurrected the dead as if waking them from sleep. All nature bowed down before them according to the will and command of the Lord, Whose sincere servant they were; although later they themselves tasted violent death from men as did their Lord, Whose good will it was to accept death from the hands of lawless and depraved Jews; and by His death he destroyed the sting of death for the whole human race.

Thus, beloved, do also all those who sincere believe and for His sake have renounced all worldly attachments—having nothing and no worldly attachments whatsoever—possess all things, all grace of God, because they have God Himself in their hearts, and are rich in God, in God’s peace, true spiritual freedom, for they are entirely free from slavery to the passions of the flesh and spirit. They are rich in eternal life which abides in them. Living in body on earth, they abide in spirit in the heavens, and say, For our conversation is in heaven; from whence also we look for the Saviour, the Lord Jesus Christ: Who shall change our vile body, that it may be fashioned like unto his glorious body, according to the working whereby he is able even to subdue all things unto himself (Phillip. 3:20–21). Amen.

1898. From The Complete Works of the Rector of the Kronstadt St. Andrew Cathedral, Archpriest John Ilyich Sergeyev. Homilies and Instructions given in 1898, with supplements. (St. Petersburg, 1899), 88–92.

Fr. Damian Kuolt12/13/2016 9:45 pm
I am looking for other publications or books containing the sermons and teachings of St of St. John of Kronstadt. Can you help me with a source?

Or how to contact Nun Cornelia? (I know her from the 1980s, when we were both converting to Orthodox Church)

Blessings to you for the coming Feast of Nativity,