Sermon on the 28th Sunday after Pentecost, Sunday of the Holy Forefathers. On those who were called to the Wedding Feast 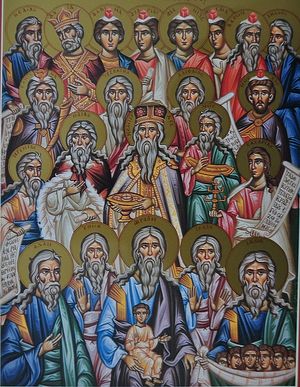 Dear brothers and sisters, two weeks before the feast of the Nativity of Christ, our Holy Orthodox Church reminds us that the feast is approaching and prepares us to greet it worthily. On this first preparatory week before the feast, the Church remembers the saints who lived before the Birth of Christ—the Old Testament prophets and all the pious people who with faith awaited the coming of the Savior, which is why this week is called the week of the forefathers. By this remembrance the Church takes us mentally to Old Testament times, to the times that led up to the appearance of the God-promised Redeemer; and in order to encourage us to morally purify ourselves, it sets before us a whole host of great forefathers who shone by their God-pleasing life.

All the forefathers lived by hope in the Redeemer Who would come, and they continually expressed their faith in Him. But while a small number of pious people awaited the coming of Christ the Savior on earth and accepted Him, a large portion of the God-chosen people of Israel did not accept Christ the Savior, rejected God’s voice and care for their salvation, and deprived themselves of eternal blessed life, about which we read today in the Holy Gospels.

The Holy Evangelist Luke tells how the Lord Jesus Christ reclined at a feast given by one the chiefs of the Pharisees, and how one of the others sitting there said, Blessed is he that shall eat bread in the kingdom of God (Lk. 14:15)! The Lord offered to him and to all those present at the meal the following parable in reply: A certain man made a great supper, and bade many: And sent his servant at supper time to say to them that were bidden, Come; for all things are now ready. And they all with one consent began to make excuse. The first said unto him, I have bought a piece of ground, and I must needs go and see it: I pray thee have me excused. And another said, I have bought five yoke of oxen, and I go to prove them: I pray thee have me excused. And another said, I have married a wife, and therefore I cannot come. So that servant came, and shewed his lord these things. Then the master of the house being angry said to his servant, Go out quickly into the streets and lanes of the city, and bring in hither the poor, and the maimed, and the halt, and the blind. And the servant said, Lord, it is done as thou hast commanded, and yet there is room. And the lord said unto the servant, Go out into the highways and hedges, and compel them to come in, that my house may be filled. For I say unto you, That none of those men which were bidden shall taste of my supper (Lk. 14:16–24).

By the good master of the house in this parable is meant God the Heavenly Father, Who continually calls us to His supper—that is, the supper in the Kingdom of Heaven, which was prepared for us from the creation of the world, inherited through the acceptance of faith in our Redeemer, Christ the Savior, and which will be revealed toward the end of this world. According to the holy fathers’ interpretation, the servant in this parable is the Only-Begotten Son of God, Who accepted the form of a servant for the sake of our salvation, and Who always calls us: Come unto me, all ye that labour and are heavy laden, and I will give you rest (Mt. 11:28).

This parable relates very closely to the Jews and pagans contemporary to our Lord Jesus Christ, who over the course of many centuries had been prepared by the action of Divine Providence to receive the Savior and enter Christ’s Church, and who out of their stubborn unbelief, because of the attraction of mundane cares and sinful pleasures, nevertheless did not wish to appear at the wedding feast of the Son of God, and did not enter the bosom of His Holy Church. The Bridegroom Himself of the Church, and His friends, the holy Apostles and Prophets, called them to the path of repentance and salvation in Christ Jesus.

After those called were shown to be unworthy of the wedding feast, God’s Servant invites at His Master’s behest all the poor, halt, lame, and blind, who respond thankfully to the invitation to enter the feast and become participants in the great supper. By the poor, halt, blind, and lame are meant the people who really do have natural faults, who respond with great eagerness to the divine invitation to follow the Lord and acquire the Heavenly Kingdom, as the Apostle Paul says: For ye see your calling, brethren, how that not many wise men after the flesh, not many mighty, not many noble, are called: But God hath chosen the foolish things of the world to confound the wise; and God hath chosen the weak things of the world to confound the things which are mighty; And base things of the world, and things which are despised, hath God chosen, yea, and things which are not, to bring to nought things that are: That no flesh should glory in his presence (1 Cor. 1:26–29).

We can understand the poor and wretched people to be those who are imperfect in the moral and spiritual sense; people who are sunk in error and vice, not gifted by nature with virtues, and who nevertheless responded to their Lord’s call to repentance, and who will enter first into the Kingdom of God.

Although this parable is, as we have said, very closely related to Jesus Christ’s contemporaries, it is also closely related to all of us. If we only listen to the voice of our conscience, each of us will find an image of our own relationship to Christ’s Church and to our own eternal salvation. From the parable we see that to the supper are first invited people who are involved in lawful labors and enjoying innocent familial joys—which are not an insult to God’s goodness, because the Lord Himself gave the commandment to labor, and to have a wife. Nevertheless, the fate of these people involved in lawful labor and innocent pleasures finishes very regrettably. It all ends for them with the loss of their participation in the eternal royal feast, and they perish. For what? Of course, they are not condemned for laboring and enjoying family life, but because amidst their mundane cares and worries they were haughty about their honored positions. Passionately attached to their labors, trades, and joys, they forgot about their duty of obedience and honor towards their Lord, and disdained the invitation to His feast.

There can be such people among us, dear brothers and sisters, who possess obvious good qualities, merits, and virtues, but spend their time in various labors and occupations, entertain themselves with innocent pleasures and joys; and in their labors and joys they completely forget about God and their obligations to Him. Proudly hoping in their righteousness, they consider themselves to have no need of God’s mercy, gifts, and graces; they resolutely refuse works of self-denial and obedience to God, and remain deaf to every call to salvation.

Attachment to earthly things, to delights, riches, and the pleasures of this age, attachment to specific persons of another sex—all deafen a person to the call to the Kingdom of God; and like those called in the Gospel parable, that person answers, I pray thee have me excused. Of course, those called ones will not taste the Lord ’s Supper, they will not delight in the eternal blessedness that they themselves renounced. During their earthly life they will not obtain anything for life in the habitations of the Heavenly Father. Love, joy, peace, longsuffering, gentleness, goodness, faith, meekness, temperance (Gal. 5:22:23)—those are the qualities that open the heavenly gates to a person and lead him into the heavenly chambers. These qualities, which comprise the fruits of the spirit, are unknown and inaccessible to those who live according to the dictates of the flesh, who live only for the earth, without a thought of Heaven, or of Jesus Christ and His commandments. Therefore, without having apparently heavy sins, without any evil deeds that might trouble the soul, the lover of the world and lover of pleasure gives himself over to his worldly cares and joys, forgetting about God, and is finally given over to eternal death: For he that soweth to his flesh shall of the flesh reap corruption (Gal. 6:8).

Now, the people of the second type, called from the roads and byways—that is, people less gifted and capable in life—turn out to be more responsive; and God’s call to them is crowned with success sooner than His call to the people who are haughty over their righteousness or their gifts. The poor in spirit, aware of their nothingness, their moral paucity and inability to gain their own salvation through their own efforts, who hunger and thirst after righteousness, with their fervency answer the call to Christ’s Kingdom, to Christian life; and from among them come the best guests at the wedding feast of the Lamb of God Who takes away the sins of the world.

All great people who render benefit to the Church through their labors, all great pastors and teachers of the Church, the holy martyrs who by their death sealed their unconquerable love for Christ, the holy ascetical men and women, and all the saints of God came from among those called—the poor in spirit, the humble of mind; and they now triumph at the wedding feast of the meek Lamb. Entering the hosts of God’s chosen are many people who are poorly endowed with mental and moral gifts—the lame, the blind, and many of those who abused and wasted their God-given gifts on wicked and shameful deeds but then repented with all their hearts, healed their sinful wounds, and put on the bright wedding garments. We are convinced of this by the many saints who after wicked, sinful lives became pure and righteous—for example, St. Mary of Egypt or St. Moses the Black.

Brothers and sisters! We are also called to the Kingdom of Heaven. Let us therefore be attentive to God’s voice, remembering that there is an end to our earthly existence, that the time will come when God’s mercy, which now calls us to repentance and correction, will as if give place to Gods’ righteous judgment and wrath. Behold, now is the accepted time; behold, now is the day of salvation (2 Cor. 6:2). Let us cleanse ourselves by repentance and be corrected, in order to greet the feast of the Nativity of Christ with a pure conscience and spiritual joy; and from a fullness of joy and feeling, let us chant to the Divine Child born in Bethlehem: Glory to God in the highest, and on earth peace, good will toward men (Lk. 2:14). Amen.