Just as he did during his life, out of his great kindness St. Spyridon continues to help people who pray to him. Here is a story sent to the editors of Eskom-Vera from Olga of the town of Syktyvkara. 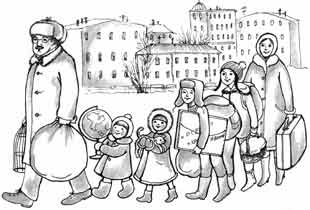 It happened last year. Before then, my husband and I lived with our three children in a crowded two-room apartment. When a fourth little one appeared to the world, it became clear that six people could not live there and we had to look for a larger place. The matter could not be put off, time was running out, and we still couldn’t find a suitable apartment. Then Olga began ordering molebens to St. Spyridon in the local church, remembering that he helps with finding living space. She ordered one moleben, but nothing changed, and then a second, with the same result. Then suddenly a friend, a very good man, out of nowhere gave Olga a small icon of St. Spyridon of Tremithus, for the children. “I heard that St. Spyridon helps children,” he said. It was as if the saint wanted to send a mysterious message through this friend, to say, “Don’t despond, it’s in the works, although you don’t see it yet.” Soon we found an apartment—four rooms, a large kitchen, and an entrance room just as large! And it was not expensive because it was on the first floor, but that also turned out to be a good thing: our four little foot-stompers could now stomp around as much as they like without disturbing the neighbors. From the apartment windows the church where Olga ordered the molebens to St. Spyridon could be seen. And what is even more amazing is that twenty years ago this apartment was a “children’s room”; it is where the kids from the surrounding yards would come to pass the rainy summer days playing checkers and table tennis… This is the “children’s room” that the kind God-pleasing, children-loving St. Spyridon spotted for Olga’s family. They moved right before the New Year. There’s no need to say how joyful they all were. And St. Spyridon looks at them from the icon as if to say, “Never despair, but be joyful, for the Lord is near!”