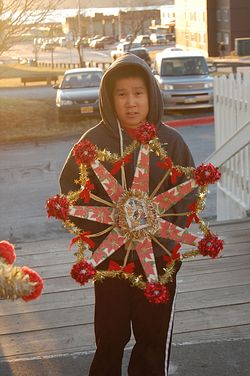 Starring in Kodiak, Alaska.
As we draw near to celebrate the Nativity of Christ, we also remember our patron, St. Herman of Alaska on December 25/26. As our neighbors celebrate the coming of Christ on December 25, we in Alaska remember the one who brought us the light of the Gospel, both by his words and deeds.

Perhaps no other activity is so identified with the Orthodox Church in Alaska at this time of the year as the custom of starring (slaviiq). Here are some thoughts on this custom; may the light of Christ illumine your hearts during this blessed season!

The Story of Starring

The custom of following a large pinwheel-shaped “star” from house to house (and in some places even from village to village), singing Orthodox Christian hymns and Christmas carols originated in the Carpathian Mountains, an area on the border between Russia, Poland, Slovakia and Romania. The peasants in this region observed the Feast of the Nativity of Christ by composing folk carols and “following the star” as the Magi did, to worship the newborn Savior.

How this custom arrived in Alaska really is not known. Certainly there were frontiersmen and settlers in Siberia who brought the custom of “starring” here and some eventually and remained in Alaska when the territory was part of the Russian Empire (1741–1867). They sang these hymns and folk carols and taught them to their wives and children, and the custom has survived since that time.

Within Alaska, customs differ, with lots of singing and then feasting and even gift giving in the Yup’ik homes along the Kuskokwim and Yukon Rivers. In Bristol Bay, along the Nushagak River and around Lake Iliamna, there is less visiting and the singers travel more quickly around their own village before heading for the neighboring communities, where most households give a gift “to the star” as a donation to the parish church the singers represent. Many homes host elaborate memorial dinners during the holiday, if a family member has passed away during the previous year.

The repertoire everywhere includes the tropar of the Feast: “Thy Nativity, O Christ Our God, has shown to the world the light of wisdom, for by it those who worshipped the stars were taught by a star to adore Thee…” the ancient hymn that inspired the custom of “starring.”

The singers in most regions enter each house singing “Glory to God in the Highest,” the song of the angels at Christmas, which in Slavonic is “Slava v vyshnikh Bogu,”from which the name Slaaviq is derived. We give slava (glory) to God, praising Him for sending His Son and adoring Him as Emmanuel, God with us.

The most popular folk carols include “Nebo i Zemlya” (Heaven and Earth), “Divnaya Novina” (Glad Tidings) “Nam Rodilsya” (He is born for Us) and “Vefleyemi Novina” (There is Joy in Bethlehem).

Everywhere, the singers conclude with the hymn“Mnogaya Leta” (God grant you many Years), invoking His blessing on all who have participated in the celebration and asking God to grant them prosperity, peace, and health for many more blessed years.