Prophet Daniel in the Lion's Den
Among those who foretold the Birth of the promised Messiah was the holy Prophet Daniel. He was of royal lineage from the tribe of Judah. As a youth he was taken captive by the Babylonian king Nebuchadnezzar (607-562 BC). And as he was handsome and of a good family, he was chosen together with several others to be trained for service in the palace. They were taught the Chaldean language as well as various sciences. The king ensured that they were well provided for and given food from his own table.

Among the chosen youths Daniel had three friends: Ananias, Azarias and Misail. All four steadfastly preserved their faith in the one true God and together refused to eat the king's food for fear breaking one of Moses' laws. They asked their overseer to give them only bread and vegetables, but the overseer was afraid that they would become thin and he would be made to suffer the king's wrath. Daniel persuaded him to make a test and allow them to observe this regimen for ten days. At the end of this period all could see that not only had Daniel and his friends not lost weight—they had grown still healthier and more handsome than before. And so they were permitted to eat as they pleased. The Lord God rewarded them for their faithfulness, granting them various talents and success in their studies. And to Daniel was given the special gift of interpreting dreams and visions.

Now in the second year of his reign, Nebuchadnezzar saw an unusual dream which troubled his spirit; when he awoke, however, he couldn't recall the content of the dream. He summoned together all the wise men, astrologers, magicians and soothsayers of the land, and demanded an explanation of his dream. But they were astonished at such a task. Who, they asked, could begin to interpret a dream which the king himself could not remember! Nebuchadnezzar grew angry and ordered all these sages to be put to death. Daniel heard of their dilemma and requested some time to think it over. That night he prayed fervently to God, and in his sleep the Lord revealed to him the king's dream and its significance. All this Daniel explained to the king—how he had been thinking of the future and beheld in a dream a terrible statue whose head was of fine gold, "his breast and his arms were of silver, his belly and his thighs of brass, his legs of iron and part of clay. Then from a mountain a stone was cut out without hands and struck the image, breaking it to pieces; and the stone became a great mountain and filled the whole earth."[1]

In explaining this dream Daniel told Nebuchadnezzar that as a king of kings to whom God had given a kingdom, power, strength and glory, he was this head of gold, and after him would arise another kingdom, less powerful, and then a third; and finally these would all be consumed by an everlasting, kingdom of the God of heaven, which kingdom would spread over the entire earth unto the ages of ages.

Nebuchadnezzar arose and, bowing down before Daniel, said: "Truly, your God is the God of gods and King of kings!" In reward for his interpretation Daniel was given authority over all the wise men of Babylon, and his three friends—Ananias, Azarius and Misail—were made rulers of the land.[2]

Nebuchadnezzar, however, did not remain steadfast in confessing the God of Daniel to be God of gods and King of kings. In the 18th year of the Babylonian captivity, Nebuehadnezzar had an enormous golden idol erected in a field. All the wise men and the learned members of Babylon gathered to witness its unveiling. It was announced that at the sound of the trumpets and the musical instruments everyone was to bow down before the idol. Anyone who failed to observe the king's decree would be thrown into the furnace.

At the given moment, all bowed down--with the exception of Ananias, Azarias and Misail. Hearing of their refusal, the king flew into a rage and commanded that the flames be increased seven-fold and that the three obstinate young Israelites be bound and thrown into the furnace. It was made so hot that the soldiers who threw the victims into the fire themselves fell dead, and even those Chaldeans standing nearby were scorched. The three godly youths, however, remained unharmed. The Lord had sent His angel to guard them from the flames, and they stood in the midst of the furnace singing praises to God,

Nebuchadnezzar, who was seated on a high throne facing the furnace, turned to his counselors: "Were there not three youths bound and thrown into the furnace? How is it that I see four, freely walking, unharmed, amidst the flames; and the fourth has the appearance of the Son of God." Approaching the furnace, Nebuchadnezzar called the youths out. When they came forth it could be seen that the flames had not touched them: neither their clothing nor their hair was even singed. Seeing this Nebuchadnezzar said: Blessed is your God Who sent His angel and preserved Ills servants who trusted in Him. And he forbade his subjects, on penalty of death, to mock the God of the Israelites.

After Nebuchadnezzar' s death, the throne passed through his son and his son-in-law to his grandson Belshezzar, And all these years Daniel continued to interpret dream s and himself to have dreams which were significant in foreshadowing future events. He foretold to Belshezzar that because he had forgotten the example of his grandfather Nebuchadnezzar and had scorned the true God, he would be killed and his kingdom would be divided. That very night the prophecy was fulfilled and the Babylonian empire was taken over by the Medes and Persians.

The Median king Darius looked with favor upon Daniel and raised him up to be one of the three kings under his sovereignty. Daniel's popularity roused the envy of the Chaldean wise men who plotted to have him killed. They knew that three times a day Daniel prayed before a window opened towards Jerusalem. They proposed the king make a decree that for 30 days no one petition any god or man, save the king, for any reason whatsoever. Breaking this decree would cause the offended to be thrown to the lions. King Darius agreed.

The holy prophet Daniel continued as before to pray to God and ask His mercy. When his enemies denounced Daniel, the king realized it was all a ruse, but he could not annul his decree and was forced to have Daniel thrown into the lions' den.

Early the next morning, Darius hurried to the den, "Daniel, servant of the living God," he shouted, "has your God been able to save you from the lions?” .... “King," answered Daniel, "my God sent His angel to close the jaws of the lions, for I have been found pure in His sight, and before you, O king, I have not transgressed."

The king was overjoyed and ordered Daniel released from the lions' den and his accusers to take his place. These men had scarcely entered the den when they were attacked by the lions and torn to pieces.

Then Darius wrote the following to be spread abroad: "I make a decree, That in every dominion of my kingdom men tremble and fear before the God of Daniel; for He is the living God... and His dominion shall be even unto the end."

And so the Prophet Daniel prospered in the reign of Darius, and in the reign of Cyrus the Persian. Among his prophecies, he foretold the year of Christ's Birth, and that the Messiah would be given over to death; this would be followed by the destruction of the temple and all Jerusalem, and the Old Testament sacrifices would cease. And so it came to pass. 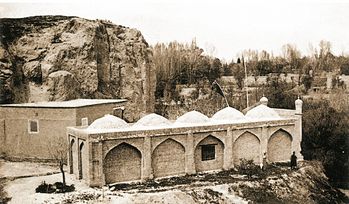 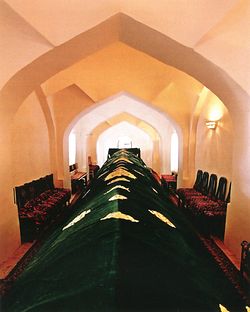 Proposed tomb of the Prophet Daniel in Samarkand.
The time and circumstances of Daniel's death have not been recorded. However, tradition maintains that Daniel was still alive in the third year of Cyrus according to the Tanakh (Daniel 10:1). He would have been almost 100 years old at that point, having been brought to Babylon when he was in his teens, more than 80 years previously. Many posit that he possibly died at Susa in Iran. Tradition holds that his tomb is located in Susa at a site known as Shush-e Daniyal. Other locations have been claimed as the site of his burial, including Daniel's Tomb in Kirkuk, Iraq, as well as Babylon, Egypt, Tarsus and, notably, Samarkand, which claims a tomb of Daniel, with some traditions suggesting that his remains were removed, perhaps by Tamerlane, from Susa to Samarkand, Uzbekistan (from Wikipedia).