For Christmas of 1870 the Elder wrote to his spiritual children about the lofty meaning of the Incarnation: 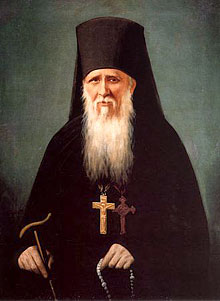 St. Ambrose of Optina
Wisdom seekers in the Lord! By the mercy and long-suffering of God we are once again reaching the yearly time of the Feast of Christ's Nativity.

Instead of the usual simple greetings with the Feast, I want to say a few words to you about the great Mystery of this glorious Feast. The Church in its hymns already calls the faithful to contemplate with lofty mind: “The Sovereign's pil­grimage, and with cleansed hearts to mystically delight in an immortal feast within the lowly cave”: As the Omnipresent has bowed the heavens and descended to earth without leaving the bosom of the Father; as the Invisible has become visible; as the Co-unoriginate Word and Co-eternal Son of God has become the Son of the Virgin; as the Pre-eternal and Incomprehensible One is now born of the Virgin as a babe; as the One unap­proachable to all is now as a babe embraced by maternal, virginal arms; how He Who covers the heavens with the clouds is now as a babe wrapped in swaddling clothes; how He Who hast created all things in wisdom, now as a swaddled babe, is laid in a manger of irrational beasts to save men from irrational­ity; how He Who nourishes all things now as a babe drinks His mother's milk. O awesome Mystery! O things incomprehensi­ble! How God without undergoing change has become a man, and makes man as a god, as the prophet foretold: “I said: Ye are gods, and all of you the sons ofthe Most High!” (Ps. 81:6). But, O our sinfulness! We as humans are dying. O, our vanity and carelessness for divine sonship! We love our slavery to the passions and evil will, willingly and unwillingly bending our necks to the yoke of the enemy. O, our blindness and obscurity! The blessed ears of the shepherds, when they heard the Angels singing in the air: Glory to God in the highest! (Luke 2:14), brought the good news of peace on earth and good will to men. Their blessed eyes were in awe when they saw the spotless Lamb which had come from Mary's womb. Blessed are all they who keep God's will and peace, which transcends human minds. The blessed and wise Magi came from distant lands to bow down before the One born of the Virgin, bringing Him worthy gifts: gold for He is King, frankincense for He is God, and myrrh for He is the One that dies and yet is immortal. Blessed are all they that worthily bow down before Him in spirit and in truth, bringing Him gifts according to their strength: as gold, righteous mites of compassion; as frankincense and sweet-smelling incense, praises and pure prayers of repentance and confession; as fragrant myrrh, grateful remembrance of His suffering and reverent worship of the life-creating wounds of Him Who became incarnate and crucified in the flesh for our salvation. But we, the slothful and insensitive, of whom I am the first, are unable to raise our minds above the earth and with purified hearts to delight in the immortal feast in the lowly cave. Humbling and reproaching ourselves, may we fervently and reverently be attentive to the readings and hymns in the Church and, as from the source of life and immortality, drink in consolation and enlightenment and salvation, through the mercy and unspeakable loving-kindness of the One Who was incarnate for our sakes, the Son of God, to Whom be glory, honor and worship, together with His unoriginate Father and His most holy and good and life-creating Spirit, now and ever and to the ages of ages. Amen.

Thou Who wast unutterably born of the Virgin, have mercy on us who have grown cold, through the prayers of Thy Most Pure Mother and all who have pleased Thee!