The Feast of the Circumcision of Our Lord Jesus Christ. Humble Comments and Suggestions 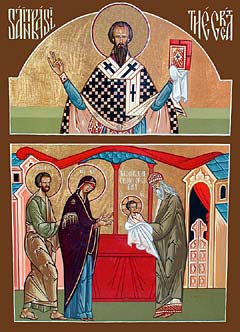 The feast of the Circumcision of the Lord. Above: St. Basil the Great, commemorated the same day (January 1/14) On January 1, eight days after the Holy Nativity of our Lord, we celebrate His Circumcision, one of the Feasts of the Lord, on which—in accordance with Hebrew tradition—He received the name "Jesus": "And when eight days were accomplished for the circumcising of the Child, His name was called Jesus, which was so named of the Angel before He was conceived in the womb" (St. Luke 2:21).

The true descendants of the Patriarch Abraham were separated from the other nations by the sign of circumcision (a prefigurement of Baptism: "the circumcision made without hands" [Colossians 2:11ff]) and thereby became members of the God-ruled community of the Old Testament; that is, through circumcision, they entered among the chosen People of God.

Christ was now "made under the law," being conformed to the prescriptions of the Mosaic Law (Galatians 4:4) and "fulfilling" the Law (St. Matthew 3:15), in order to elevate the Church of the Law into a Church of Grace, into a new "Israel of God" (cf. Galatians 6:16), into a Theanthropic organism—into His Body.

The Circumcision of our Lord inspired our Holy Church to institute a beautiful and deeply symbolic custom for the newborn children of Christians: at eight days, the Priest reads the "Prayer for the Signing of a Child Who is Receiving a Name on the Eighth Day After His Birth" (see the Small Evchologion); in such a way the first "Seal" of Grace is given to the infant: "Let the light of Thy countenance be signed upon Thy servant (name), and let the Cross of Thine Only-begotten Son be signed in his heart and his thoughts...."

1) A worthy thing it would be were parents not to neglect this most blessed tradition of our most Holy Orthodox Church, so that newborn children might immediately be "sealed" in Christ through the blessing of a Priest.

2) And that parents should decide in a timely manner on the name to be given to the infant; our Lord’s name, "Jesus," was "given" by an Angel even before Christ was conceived by the Holy Spirit in the immaculate womb of the Theotokos (Annunciation: St. Luke 1:31).

3) A timely decision on a name means that an infant will have its own Saint to protect it from an early stage, and the parents will immediately call it by its Christian name, thereby avoiding the oddity of calling it "baby" until it is Baptized and illumined.

4) The Orthodox Slavs have the good custom of giving a child the name of the Saint who is celebrated on the day of its birth, in order to avoid unnecessary and senseless friction in the family; moreover, this practice insures that there are no "forgotten" or "displeased" Saints!

5) The name "Jesus," which our Lord received at His Circumcision, means "Savior"; that is, in Greek, the name of our Lord is "Soter" ["Savior"] (St. Matthew 1:21): "For this name (Jesus), when translated into the Greek language, is rendered ‘salvation of God’; ‘Jesus,’ therefore, is translated as ‘Soter’ [‘Savior’]" (St. Theophylact, Patrologia Graeca, Vol. CXXIII, col. 704AB).

Perhaps, therefore, all those who are [among Greeks] named "Soterios" or "Soteria" would do well to celebrate their Name Days on January 1, so that the Feast of the Circumcision might become more familiar.

It is truly a pity that the profound symbolism of this Feast should be "lost" in the "worldly tumult" of the twelve-day period between the Nativity and Theophany, and particularly on New Year’s Day; and that we should lose, as well, an opportunity for us to enter more deeply into the "circumcision made without hands" of our Holy Baptism.

Should this be edited to read "January 1"?
×