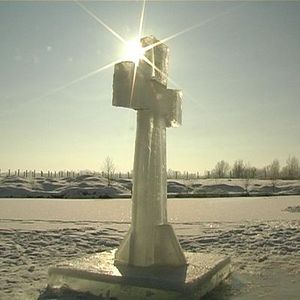 Last Friday, January 6 [Gregorian Calendar], marked the Orthodox Christian feast of Theophany (Epiphany in the West). It commemorates the baptism of Jesus Christ by John in the Jordan river, the manifestation of the Trinity to those present, and the sanctification of the waters through their contact with God incarnate.

Every year this last aspect of the feast stands as a reminder of the Christian viewpoint of God’s concern for the world he created. Indeed, according to a hymn from the Great Blessing of the Waters by St. Sophronios of Jerusalem, “Today the nature of the waters is sanctified.”

In the Orthodox tradition, there is a sense in which, while all of nature was made for the use and care of humankind, the ultimate purpose of the material world is sacramental. As the Russian Orthodox moral philosopher Vladamir Solovyov wrote, “[M]atter has a right to be spiritualised.“

This view contrasts with two rival views of ecology. One view, which continually crops up in popular culture, is that humans ultimately are doing more harm than good. Our efforts to master nature and use it for humanity’s benefit will cause its (and our) destruction someday. The second is the view against which the first is reacting. It is the modern view of a limitless use of natural resources with little concern for their preservation.

The vision given to us in Theophany is something else entirely. Through his baptism, Christ sanctifies the waters so that we might be sanctified by the waters of baptism. Water becomes a means by which humanity is perfected and the world as a whole reflects the glory of God to a greater degree.

In the Orthodox Church, this is not only true of the water, either. Bread and wine are used in the Eucharist, oil in Holy Unction and Chrismation (Confirmation), wood and gold and egg tempera paint in the making of holy icons, etc. The list goes on and on. The world is not meant to be left as is, nor is it meant to be carelessly depleted of its resources; it is meant to be spiritualized. It is a means and manifestation of divine grace and beauty.

How does this relate to economics? Economically, natural resources are material capital, and according to Vladimir Solovyov, we err if we seek to divorce them from their spiritual and moral purpose and make them independent, existing in and for themselves. He writes,

Alienation from the higher spiritual interests becomes inevitable as soon as the material side of human life is recognized to have an independent and unconditional value. One cannot serve two masters; and socialism naturally gives predominance to the principle under the banner of which the whole movement had originated, i.e. to the material principle. The domain of economic relations is entirely subordinated to it, and is recognised as the chief, the fundamental, the only real and decisive factor in the life of humanity. At this point the inner opposition between socialism and the bourgeois political economy disappears.

To misunderstand the material world, to fail to view it as the good creation of God with its own spiritual and moral purpose and, instead, to give it absolute value, ultimately leads to its degradation. It is, in fact, the definition of greed to value material things as something to be desired in and of themselves, apart from morality. The bourgeois that Solovyov criticizes are the type of people who act out of greed through manipulation of the market. The socialists, on the other hand, act out of greed through a call for revolution. Both, ultimately, make the same ecological error.

Socialism really stands on the same ground as the bourgeois régime hostile to it, namely, the supremacy of the material interest. Both have the same motto: “man liveth by bread alone.”

The Feast of Theophany, by contrast, calls Christians to adopt a higher, spiritual view of themselves and the world in which they live. And it is my contention that such a view is a far superior starting point for a Christian understanding of material capital. Anything less tends to degrade the world or ourselves.