We shall uphold the candle of Orthodoxy in Kosovo!

Plea to parishioners and all who wish to help. 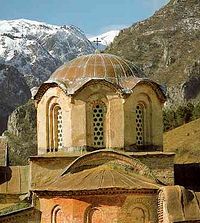 At the Saturday evening service before the Sunday of the New Martyrs and Confessors of Russia, Archimandrite Tikhon (Shevkunov), abbot of the Sretensky Stavropegic Monastery in Moscow, gave a talk to the congregation about the monastery’s new effort to help the suffering Serbian Orthodox population in Kosovo and Metohija.

Today, at the threshold of Great Lent, with the blessing of His Holiness Kirill, I would like to address you with a special sermon. You all know that that for two decades now, a tragedy is happening in the Serbian land. The Orthodox inhabitants of Kosovo and Metohija have been pushed out of their ancient, native lands. Many have lost their lives, not to mention their property. Churches were destroyed, and many monks and nuns were chased out of their monasteries. All this was not only allowed, but in fact instigated by many international government leaders. This lawlessness continues to go on.

Even the very word, “Metohija” translates as “Church land”. On this place in Kosovo and Metohija, there is a higher concentration of churches and monasteries than anywhere else in the world. It was truly a holy land. However, in the late 1940’s, foreign people were brought there; their tribes multiplied, and at the instigation of evil powers—of which there are not a few in our world—they began to push out the Orthodox Serbs. You already know about the tragedy that has happened and continues to happen there. But we deeply believe that the Lord will preserve Orthodoxy there, and justice, peace, and the true faith will reign once more on that small patch of Orthodox land. But this cannot happen without human effort. Thus, in this—now Moslem—enclave in Europe, Kosovo and Metohija, Orthodox people are still living. In certain cities there are literally only a few of them. They are outcasts in their own land. They, their family and friends, were exiled from their own homes. Their churches were destroyed, many were burned. The same thing happened to their monasteries. But courageous people, Orthodox Christians, continue to uphold the candle of Orthodoxy. In several churches and monasteries, church services are held. Monks who live in some of the ancient monasteries cannot even go outside the walls of their holy communities. They are threatened with death and violence. In order to purchase the bare necessities of life, from matches to bread, they must travel to Serbia, guarded by international armed forces. They continue to live there, although it would be much more convenient and much less dangerous to abandon these places and move to the safety of Serbia. But they remain in the place where the Lord has placed them. Many of their brother-monks and sister-nuns have been tortured and killed. They are new martyrs, just like the New Martyrs whose memory we celebrate today.

But even beyond that—in Kosovo a theological seminary has been opened. This is a true podvig of the Serbian people. They have sent from Serbia what is most dear to them—their children, fifteen, sixteen-year-old boys, to a small fortress where the seminary is located, situated within a Moslem world. Unfortunately, the Albanians who live there treat them with extreme cruelty. These boys cannot even leave the territory of their seminary. They live every semester of their school year on that patch of land. What they need is brought to them, but these children stay in the fortress. Their entire seminary building was burned. They have been able to restore only one section, in which they both live and study. This is all very close to our hearts; all of us here have rebuilt with our own hands the destroyed churches and monasteries of the Russian Orthodox Church. We know about this all too well.

At the blessing of His Holiness Patriarch Kirill, just as we collected aide many years ago for our brothers and sisters in Grozny, Chechnya, we are now taking up a collection to help the seminary in Prizren, and the monasteries and churches of Kosovo. The brothers of Sretensky monastery will send to Kosovo a portion of the funds earned by our book publishing and sales, as well as our agricultural income, and we also call upon you to participate in this work of helping Orthodox Christians who courageously preserve Orthodoxy in that land. These funds will go toward the restoration of the buildings of the Kosovo seminary, and the support of the teachers and students (and I repeat: these are extraordinarily courageous people). We will also help, with God’s help, of course, one of the monasteries in Kosovo which is also suffering a difficult lot. As our Serbian brothers in Kosovo have requested, we will also help the simple, Serbian people who live in Kosovo, who do not leave, who out of principle do not want to abandon their native land. Although the majority of the Serbs— 250,000—have already left Kosovo. Those who remain are all Orthodox people who understand that they must preserve Orthodoxy there, even in the face of extreme aggression.

What are they asking for? They are asking for support of, strange as it may sound, several “kitchens”—they simply have nothing to eat. They have bought several houses to which foodstuffs are brought, and they receive food in those houses. These people have no other way to receive food. The monastery will be administering its own funds to these needs I have just enumerated, and we will be gathering donations from our parishioners for them as well. We have hung a special collection box with a sign indicating “For aide to monasteries and churches in Kosovo and Metohija” near the entrance of our church, where you may place your donations. After Great Lent, the brothers and seminarians of our monasteries will go there, with your blessing and the blessing of His Holiness the Patriarch, and bring them what we have collected, so that they might be able not only to restore buildings, not only to support their life, but also so that they can feel that we in Russia—who have also experienced persecutions—not only pray for them, but actively help them. If anyone would like to donate a non-cash sum, he or she may contact our treasurer, Fr. Amvrosy.

May God grant that we might truly, through our small contribution, lend spiritual support to our brothers and sisters, and not allow the candle of faith to go out in Kosovo and Metohija.

For those living outside Russia who would like contribute to Sretensky’s Monastery’s efforts in Kosovo, payment links will be posted in future articles.