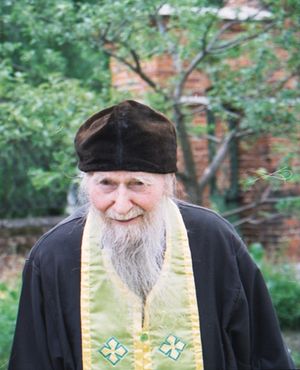 Archpriest Andrei (Uskov) This year marks one hundred years since Fr. Andrei (Uskov) was born. Known and loved by many people who were beginning their life in the Church during the 1980s and 90s, his memory lives on at the parish he restored—the Church of Archangel Michael in in the village of Mikhailovskoe, south of Moscow.

When Fr. Andrei began serving at that church, the area was surrounded by agricultural fields and forest. There were no roads leading to the village, which consisted of a few old houses. Nevertheless, parishioners travelled from Moscow and sloshed through the thick mud to reach that holy place. Fr. Andrei welcomed all who came to pray at the Divine Services, and a warm meal was always ready afterwards.

Fr. Andrei fell asleep in the Lord on the eve of the commemoration of the Three Holy Hierarchs, and the feast of the Synaxis of the Holy New Martyrs and Confessors of Russia, a day very significant to him—after all, Fr. Andrei lived through the time of Russia’s New Martyrs, and was a confessor of the faith. Not long before his death, Fr. Andrei said to his cell attendant, “Three Holy Hierarchs… Remember it!”

This brief biography was written just after his repose by a long-time altar attendant at Church of St. Michael where Fr. Andrei served, now a hieromonk at Sretensky Monastery in Moscow.

On the evening of February 12, 2005, the eve of the feast of the Synaxis of the Holy New Martyrs and Confessors of Russia, Archpriest Andrei Uskov, the Rector Emeritus of the church of the Archangel Michael and all the Heavenly Powers in the village of Mikhailovskoe, Domodevodo region, [Moscow diocese], reposed in the Lord.

Andrei Korneevich Uskov was born on November 27, 1911 on the day of the commemoration of the icon of the Mother of God “Of the Sign,” to a pious peasant family in the village of Yatskovichi, Starodubovsky region of Chernigov Province.

Batiushka to his final days remembered his grandfather, Michael Ivanovich, who cultivated in the future clergyman love for prayer, reading of the Holy Scriptures, and deep devotion to the rules of the Orthodox Church. Fr. Andrei would often recall a dream he once had during the terrible 1930s, when he was having dark moments of doubt. His grandfather appeared to him holding an enormous book. Written on the cover was the word, BIBLE. Michael Ivanovich said to him, “Andrei, read the Bible!” The young man began to diligently read the Holy Scripture, and all his doubts disappeared.

During the period of “Soviet power’s triumphant march,” the Uskov family was stripped of a significant portion of their land and forest property, and Fr. Andrei found himself numbered amongst the politically unreliable, degraded to the status of a “kulak[1] element.” Having arrived in Moscow in the 1930’s, the young Andrei worked in the Tushinsky aviation factory and in other areas of military industry that produced aviation technology. Thanks to his naturally sharp mind and ability to get to the core of a matter, the young man, having no more than a few years of parish school behind him, was assigned to responsible positions that normally required a technical education and professional qualifications.

In 1945 Batiushka entered the Orthodox Theological Institute held in Moscow’s Novodevichy Monastery, which was later transformed in 1946 into the Moscow Theological Seminary and Academy.

During the revival from the abomination of desolation of the Theology school located within the walls of the Holy Trinity-St. Sergius Lavra, seminarian Andrei Uskov headed one of the construction divisions. Fr. Andrei remembered his teachers and instructors, Archimandrite Benjamin (Milov), A. I. Georgievsky, and N. P. Doktusova, with unfailing warmth and love. The monastery of St. Sergius united Batiushka for many years in bonds of friendship with Archimandrite Kyrill (Pavlov), Archpriest Simeon Siniutin, Metropolitan Pitirim of Volokolamsk and Yuriev, and with many other pastors and archpastors of the Russian Orthodox Church.

In December of 1949, on the feast of St. Nicholas of Myra and Lycea, Bishop Makary (Daev) of Mozhaisk ordained the graduate of the Moscow Seminary, Andrei Uskov, as deacon, and on the next day, as presbyter. Soon Priest Andrei was appointed Rector of the church of the Dormition of the Mother of God in the town of Stromyn, Noginsk region—a town with a glorious ancient history.

During the era of massive closing of churches [under Kruschev], Fr. Andrei tried to lawfully prevent the regional authorities from closing the Stromyn parish, for which action he lost his registration. Batiushka went into reclusion for an entire year, praying to the Lord and his Most Pure Mother to destroy the demonic devices. His prayer was not in vain—having lost his registration on the feast of the icon of the Mother of God “Unexpected Joy,” exactly one year later, on the very same feast of this miracle-working icon of the Queen of Heaven and Earth, he again received permission from the regional authorities over religious affairs to serve in a parish.

From 1961 to 1966 Archpriest Andrei served in various parishes in the Moscow Diocese.

In 1966, the pastor of rational sheep, now tested and made wiser by life’s vicissitudes, received an order from Metropolitan Pimen (Izvekova) of Krutitsky and Kolomna stating his appointment as Rector of the church of the Archangel Michael and all the Heavenly Powers in the village of Mikhailovskoe. Having seen the half-ruined church, which had been erected under the care of the pious Countess Anna Orlova-Chesmenskaya during the early half of the 19th century in that once flourishing area of Moscow Province, but cut off in the mid 20th century from the outside world by outrageous road conditions, Batiushka could not but consider the church’s restoration as impossible by human standards.

Nevertheless, as Fr. Andrei would later often say, “where ‘humanly’ ends, Godly begins.” Having received a blessing from his elder, Archpriest Peter Cheltsov (now canonized among the confessors and righteous ones of the Russian Orthodox Church), Batiushka began to celebrate frequent Divine Services and zealously organize the restoration work. Soon an endless train of pilgrims began to make its way to Mikhailovskoe, through the autumn mud, winter snowdrifts and spring floods. The regional authorities were bewildered by the rapidity with which the church was restored to its original grandeur. Nun Barbara (Novikova), sent on obedience to the church of the Archangel Michael in 1972, was Fr. Andrei’s faithful helper and zealous co-worker in Christ’s field.

With God’s help and through Batiushka’s selfless labors the church soon achieved its original beauty, and the parish’s housekeeping was brought into strict and exemplary order. At the same time, Fr. Andrei always emphasized the well-ordering of man’s inner temple, and always showed himself to be an image of deep Christian faith and boundless hope in God’s mercy. Batiushka possessed a rare gift of fatherliness, pastorship, the ability to see the state of a person’s soul, and an amazing gift of consolation. He was a pastor to pastors, instructing by his own example future clergymen to worthily carry on the ascetic labor of being a priest, repeating often that “the priesthood is voluntary martyrdom.”

Everyone who ever met Archpriest Andrei was always amazed at his limitless love for people, his ability to completely forget about himself, and to be, as the apostle says, “all things to all men, that by all means [he] might save some. [I Cor. 9:22]. At the same time, Batiushka hated all sin and unrighteousness, and grieved deeply over souls that had strayed from the path of salvation. Fr. Andrei called upon his parishioners not to be to drawn away by the outward aspects of spiritual labors, or to make too quick an assessment of any movement arising in society, but to “be transformed by the renewing of your mind, that ye may prove what is that good, and acceptable, and perfect, will of God” [Rom. 12:2].

For his long and selfless service to the Church, Archpriest Andrei was granted many awards by his Metropolitan and the Patriarch, amongst which were the miter, and the right to serve the Divine Liturgy with the Royal Doors open until the “Our Father” is sung.

Although Batiushka had to endure difficult illnesses during the final years of his life, he never fainted in heart, but rather called these infirmities that brought him such suffering “precious rewards from the Lord.” Even in times of such physical suffering he still found the strength to receive frequent visitors. In his house one could meet priests from Moscow and St. Petersburg, from Ryazan and Kargopol, a hierach from Bulgaria, a priest from France, or nuns from America; and all found there wise counsel and spiritual consolation.

Just before his final moments, Fr. Andrei received the sacrament of Holy Unction. Batiushka’s soul departed over the threshold of this earthly life just after the priest’s words of dismissal.

By the blessing of Metropolitan Juvenally of Krutitsky and Kolomna, the funeral service for newly-reposed Archpriest Andrei was served by the dean of the Domodedovo region, Archpriest Alexander Vasiliev, and assisted by a great number of clergy on the Feast of the Meeting of the Lord. “Now lettest Thou thy servant depart in peace, O Master according to Thy word,” the words pronounced by Elder Simeon the God-receiver upon meeting Christ, became the final words of farewell at the grave of the reposed pastor.

In everlasting remembrance shall the righteous be. May our Lord Jesus Christ give rest to the soul of His faithful follower in the heavenly abodes, where there is neither sickness, nor sorrow, nor sighing, but life everlasting—a life, as our reposed Batiushka often said, where there will be no separation.

Archpriest Andrei Uskov is buried behind the church’s altar.

1 “Kulak” was the derisive name given to prosperous peasants, who were repressed by the soviet government.
Comments
×