Fascinating Facts Behind the Forty Martyrs of Sevaste 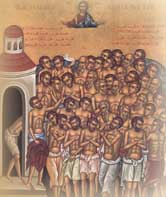 How many agreed to sacrifice? A legion consisted of from 3,000 to 6,000 infantry plus cavalry. Apparently at least 2,960 men from the Sevaste legion sacrificed at Licinius's order. Barely 1% bucked his demand!

The legion stationed at Sevaste may have been the famed Thundering Legion. Dating back to Caesar Augustus, it took its name from a lightening emblem on its shields. The Thundering Legion is connected with another unusual historical event. During the reign of Marcus Aurelius, it was trapped in a dry valley and only saved from dying of thirst by a furious thunderstorm which provided drinking water and threw enemy soldiers into panic. Christian writers spoke of the thunderstorm as a miracle in answer to the petitions of a group of praying Christian soldiers. Pagan authors attributed it to sorcery or to the prayers of Marcus Aurelius.

Why a legion of troops in Sevaste?

Licinius had to defend against Barbarians and Persians. Sevaste (now Sivas, Turkey) was a logical place to station a sizable force to meet challenges from North and East.

The bodies of the Forty were burned and their ashes cast into a river. The current deposited fragments of bone at a bend in the stream. Christians collected and preserved them as honored remains to be kept among local churches.

Sevaste (now Sivas, Turkey) was in Armenia. It was a strategic location to station troops to meet threats from North and East.

Ephrem the Syrian, one credible witness to the story

Too Incredible to Be True? Are we really supposed to believe that forty men in the prime of life voluntarily undressed to die by freezing? Is this just a legend?

Actually, the story is as solid as ancient history gets. There are at least three sources for it. The men were martyred in 320. Gregory of Nyssa (c.335-396) tells that he was still a boy when a feast was established in their memory and churches dedicated to them. He wrote two sermons on them and declared his intention to bury his parents beside the remains of some of the brave soldiers.

When Gregory's brother, Basil the Great, Bishop of Caesarea (c.330-379), preached a sermon on the feast day of the Forty Martyrs, there were still men and women alive who remembered the brave fellows. Basil's sermon, by the way, is the oldest written record we have of their icy death, and was preached in a church named for the Forty Martyrs.

Another person who later wrote about the martyrs was actually alive as a fourteen year old boy when they spent their night on the ice. Ephrem the Syrian (c.306-373) became a leading Christian scholar and hymn writer. He spent much of his life in Edessa, about two hundred miles south of Sevaste. Among his many poems was a eulogy on The Forty.

That Day the North Wind Did Blow

The day was very cold. Surely I do not have to inform you about the cold since today's weather gives you a clear idea about it. The chill even penetrates the walls....such was the season of the contest and the time of their miracles when the north wind blew so vehemently.--Gregory of Nyssa's 1st Sermon on the Forty Martyrs

Did Licinius Kill for Spite?

It is commonly and inaccurately stated that Constantine made Christianity the official religion of the Roman Empire when he became emperor. Not so. It was Theodosios I over a half-century later with his edict of 380. Constantine actually came to power with a co-emperor Licinius.

In 313, Licinius needed Constantine's help and struck a deal with him. To seal the bargain, Constantine married his sister to Licinius. The two generals issued the edict of Milan, granting religious toleration to the empire. Licinius even fought under a Christian banner.

So what changed? Why did Licinius turn on the Christians in 320? Both wanted the same thing --single control over the empire. Persecuting Christians was one way for Licinius to show how much he hated Constantine, whose favor for the Christian faith was well known.

Out of Place Christians?

What were Christians doing in the army? Early Christian writers tell us that Christians believed it was wrong to fight and kill. Could it be that The Forty were draftees? Or had Christians decided it was okay to fight as long as they did so under a Christian banner? Perhaps the men converted to Christ after enrolling in the armed forces.