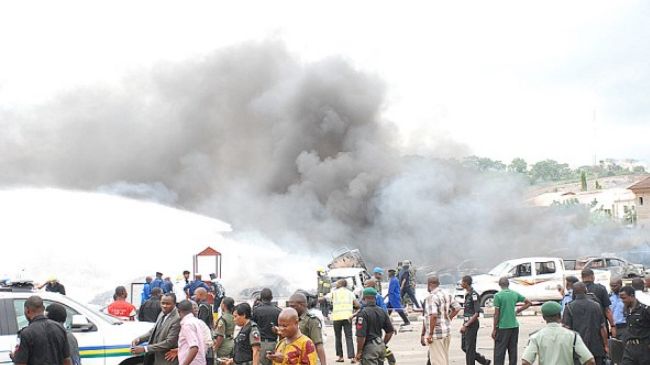 A bomb blast at a church in Jos on February 29
Half of Iraq's indigenous Christians are gone, due to the unleashed forces of jihad [holy war]. Many Christians fled to nearby Syria; yet, as the Assad regime comes under attack from al-Qaeda and others, the jihad now seeps into Syria, where Christians are experiencing a level of persecution unprecedented in the nation's modern history. Similarly, some 100,000 Christian Copts have fled their native Egypt since the overthrow of the Mubarak regime; and in northern regions of Nigeria, where the jihadi group, Boko Haram, has been slaughtering Christians, up to 95% of the Christian population has fled.

Meanwhile, the "big news" concerning the Muslim world in the month of February—the news that flooded the mainstream media and had U.S. politicians, beginning with President Obama, flustered, angry, and full of regret—was that some written-in [in Islam it is forbidden to write anything in a Korans] in Afghanistan were burned by U.S. soldiers because imprisoned Muslim inmates had been using them "to facilitate extremist communications."

Categorized by theme, February's batch of Muslim persecution of Christians around the world includes (but is not limited to) the following accounts, listed in alphabetical order by country, not severity.

Algeria: Armed men raided and ransacked a church that had been formally recognized since 1958, and dismantled the crucifix. The pastor and his family, trapped inside, feared that "they could kill us." The pastor "has been repeatedly threatened and attacked since being ordained in 2007. In the summer of 2009, his wife was beaten and seriously injured by a group of unknown men. Then, in late 2011, heaps of trash were thrown over the compound walls while an angry mob shouted death threats."

Egypt: Thousands of Muslims attacked a Coptic church, and demanded the death of its pastor, who, along with "nearly 100 terrorized Copts sought refuge inside the church, while Muslim rioters were pelting the church with stones in an effort to break into the church, assault the Copts and torch the building." They did this because a Christian girl who, according to Islamic law, automatically became a Muslim when her father converted to Islam, fled from her father and was rumored to be hiding in the church.

Iran: Iran's Ministry of Intelligence has ordered the last two officially registered churches holding Friday Farsi-language services in Tehran—Farsi being the nation's Persian language—to discontinue the language: "Friday services in Tehran attracted the city's converts to Christianity as well as Muslims interested in Christianity, as Friday is most Iranians' day off during the week." Banning church use of Farsi prevents most Iranians from hearing the Gospel.

Kazakhstan: A new report notes that "Churches are being raided, leaders fined and Christian literature confiscated as the Kazakh authorities enforce new laws intended further to restrict religious freedom in the country."

Kuwait: A parliamentarian is set to submit a draft law banning the construction of churches. Originally, Osama al-Munawer announced on Twitter his plans on submitting a draft law calling for the removal of all churches in Kuwait. However, he later "clarified" his statement, saying that existing churches can remain, but the construction of new ones must be banned.

Macedonia: A two-century-old Christian church famed for its valuable icons was set on fire in response to "a carnival in which Orthodox Christian men dressed as women in burkas and mocked the Koran." Earlier, "perpetrators attacked a[nother] church in the nearby village of Labunista, destroying a cross standing outside" and "also defaced a Macedonian flag outside Struga's municipal building, replacing it with a green flag representing Islam."

Nigeria: A Muslim suicide bomber forced his way into the grounds of a major church, killing two women and an 18-month-old child during Sunday morning service; 50 people were injured in the blast. In a separate incident, Muslims detonated a bomb outside a church building, injuring five, one critically: "The bomb, planted in a parked car, was left by suspected members of Boko Haram, which seeks to impose sharia [Islamic law] throughout Nigeria."

Pakistan: A dozen armed Muslims stormed a church, seriously wounding two Christians: one man was shot and is in critical condition, the other risks having his arm amputated; another church member was thrown from the roof, after being struck repeatedly with a rifle butt. "The extremist raid was sparked by charges that [the] church was trying to evangelize Muslims in an attempt to convert them to Christianity. The community several times in the past has been the subject of assault and the pastor and his family the subject of death threats." As usual, the police, instead of pursuing the perpetrators, have opened an investigation against the pastor and 20 other church members.

Syria: Some 30 armed and masked jihadis attacked a Catholic monastery—unprecedented in Syria's modern history—demanding money. According to the Catholic Archbishop of Damascus, "the situation in the country is spiraling out of control as the armed opposition spreads its influence to different regions of the state."

Bangladesh: Three American Christians were injured after their car was attacked by a Muslim mob who suspected they were converting Muslims into Christians: at least 200 angry locals chased the missionaries' car and threw stones at it, leaving three with cuts from broken glass.

Egypt: Rather than punishing the perpetrators who opened fire on and ran tanks over Christians protesting the constant destruction of their churches, the government arrested and is trying two priests in connection to the Maspero massacre. And although Egypt's new parliament has 498 seats, only six are Copts, even though Copts make up at the very least 10% of the population, and so should have approximately 50 seats. Finally, indicating how bad the situation is, Coptic protesters organized a demonstration on Tuesday in front of Parliament to protest "the disappearance and abduction of Coptic girls."

Indonesia: The Islamist Prosperous Justice Party complained about the Red Cross' symbol of a cross; they said it was too identifiable with Christian culture and traditions. Red Cross volunteers and activists rejected the claim, saying that any changes to the logo would be "tantamount to giving in to the extremists."

Iran: A pastor of a major house church movement began serving a five-year prison sentence for "crimes against the order." According to one activist, "His 'crimes' were being a pastor and possessing Christian materials." He is being beaten in jail and has grown ill, to the point where his hair has "turned fully gray."

Israel: A mob of around 50 Palestinian Muslims stoned a group of Christian tourists atop Jerusalem's Temple Mount, wounding three Israeli police officers in the process. The attack is believed to have been instigated by the former Muslim mufti of Jerusalem.

Pakistan: Yet another Christian woman, a teacher, has been targeted by Muslims on allegations that she burned a Koran. A mob stormed her school in an attempt to abduct her, but police took her into custody. Also, a Christian student who missed the grade to get into medical school by less than 0.1% would have earned 20 extra points if he had memorized the Koran—although no bonus points for having similar knowledge of the Bible.

Turkey: A new report notes that "Christians in Turkey continue to suffer attacks from private citizens, discrimination by lower-level government officials and vilification in both school textbooks and news media." The report adds that there is a "root of intolerance" in Turkish society toward adherents of non-Islamic faiths: "The removal of this root of intolerance is an urgent problem that still awaits to be dealt with."

Turkmenistan: A 77-year-old Christian man was detained and questioned by police for six hours after he tried to print copies of a small book of Christian poetry. He was forced to write a statement and banned from travelling outside his home region while the case is being investigated.

Uganda: Not long after a pastor was attacked with acid and blinded by Muslims screaming, "Allahu Akbar!" ["Allah is Greater!"], his friend, another pastor, was shot at by "Islamic extremists" in what is being described as "a new wave of persecution against Christians in Uganda."

Egypt: Two Christians were killed "after a Muslim racketeer opened fire on them for refusing to pay him extortion money." The local bishop "hold[s] security forces and local Muslims fully responsible for terrorizing the Copts living there, who are continuously being subjected to terror and kidnapping."

Iran: After enduring five months of uncertainty in a prison, a Christian convert who was arrested in her home by security authorities has been sentenced to two years in prison by the Revolutionary Court in Tehran. Authorities further arrested six to ten Christian converts from Islam while they were meeting for worship at a home in the southern city of Shiraz.

And of course Pastor Yousef Nadarkhani awaits execution for refusing to renounce Christianity.

Nigeria: A 79-year-old Christian woman and choir singer was found dead at her home, her throat slit with a note in Arabic left on her chest reading: "We will get you soon," a message believed to be directed at her son, a pastor at a local church.

Somalia: Al-Shabaab Muslims beheaded a 26-year-old Muslim convert to Christianity who had worked for a Christian humanitarian organization that the terrorist organization had banned. He is at least the third Christian to be beheaded in Somalia in recent months.

Turkey: A 12-year-old boy, Hussein, publicly professed his Christian faith by wearing a silver cross necklace in school. Accordingly, Muslim classmates began taunting and spitting on him. When the boy threatened to report one of the bullies, the bully's father threatened to kill him. His religion teacher beat him severely: "Like in most Islamic countries, students of all faiths are required to attend Islamic studies in school. Those who refuse to recite the Koran and Islamic prayers are often beaten by the teacher. And so it was for Hussein. He said he was punished regularly with a two-foot long rod because he wouldn't say the Islamic Shahada."

Accordingly, whatever the anecdote of persecution, it typically fits under a specific theme, including hatred for churches and other Christian symbols; sexual abuse of Christian women; forced conversions to Islam; apostasy and blasphemy laws that criminalize and punish with death to those who "offend" Islam; theft and plunder in lieu of jizya (financial tribute expected from non-Muslims); overall expectations for Christians to behave like cowed dhimmis, or second-class, "tolerated" citizens; and simple violence and murder. Sometimes it is a combination.

Because these accounts of persecution span different ethnicities, languages, and locales—from Morocco in the West, to India in the East, and throughout the West wherever there are Muslims—it should be clear that one thing alone binds them: Islam—whether the strict application of Islamic Sharia law, or the supremacist culture born of it.

Benjamin5/5/2012 12:34 am
Such horror and nothing is the the usual news. This is like the first century when Christians were persecuted. When wil the end of time come?
×