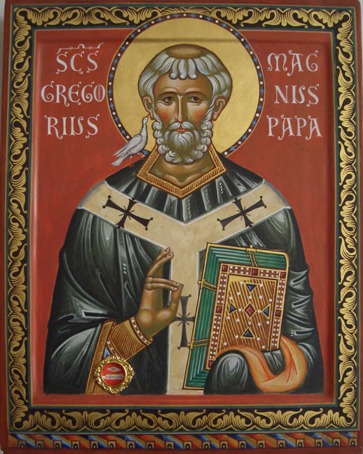 Saint Gregory was born in Rome about the year 540. His grandfather was Pope Felix; his mother Silvia and his aunts, Tarsilla and Emiliana, have also been numbered among the choir of the saints by the Roman Church. Having received a brilliant secular education, he attained high state offices. Leading a God-pleasing life, he aspired to monasticism with all his soul. After the death of his father, Saint Gregory spent all his fortune on the building of six monasteries. In Rome, he founded a monastery in the name of the Holy Apostle Andrew the First-Called and, having exchanged his palaces for a narrow cell, received the monastic tonsure there. Then, on a commission from Pope Pelagius II, Saint Gregory lived a long time in Byzantium. There he wrote his "Commentary on the Book of Job". After the death of Pope Pelagius, Saint Gregory was elected to the Roman cathedra. Considering himself unworthy, the saint for seven months would not bring himself to accept such a responsible ministry, and only yielding to the entreaties of the clergy and the flock did he accept consecration.

Wisely governing the Church, Hierarch Gregory tirelessly planted the Word of God. Saint Gregory compiled in the Latin tongue the order of the Liturgy of the Presanctified Gifts (used during Great Lent), which before him was known only in oral tradition. Confirmed by the Sixth Ecumenical Council, this order was accepted by the whole Orthodox Church.

He zealously struggled with the heresy of the Donatists,[1] and converted to the true faith the pagan inhabitants of Britain and the Goths, who were adherents of the Arian heresy.[2]

Hierarch Gregory left behind him numerous works. After the appearance of his book, Conversations or Dialogues on the Life and Miracles of the Italian Fathers, (otherwise known as The Dialogues) the hierarch began to be called the "Dialogist", that is "one conducting a dialogue, a collocutor". His "Pastoral Rule" (or "On Pastoral Ministry") enjoys special renown. In this work, Hierarch Gregory thoroughly describes the image of the true pastor. Also, 848 of his letters of moral content have come down to us.

Hierarch Gregory headed the Roman Church in the course of thirteen years, taking care of all the needs of his flock. He was distinguished by an unusual love for the poor, for which he was vouchsafed a vision of the Lord Himself.

The Hierarch died in the year 604. His relics rest in the Cathedral of the Holy Apostle Peter in the Vatican.

[1]Donatists: Supporters of a movement that arose in North Africa at the beginning of the fourth century during the period of Diocletian's persecutions of Christians, when the hierarchy of the Church treated apostates from the faith during the persecutions forbearingly. The Donatists required purity from the Church, holiness from all its members and the rebaptism of apostates.
[2]Arianism arose at the beginning of the fourth century and was called by the name of its founder - the Alexandrian priest, Arius. According to his teaching, the Second Person of the Most Holy Trinity, Christ the Logos, even though the most perfect creation of God, is still a creature, and as such, He is the Son of God "not by essence, but by grace". Arianism was condemned at the First Ecumenical Council
Comments

Marco Mannino Giorgi3/26/2016 1:15 am
As historician and liturgist, I would say that (unfortunately for the sinaxarion) our father among the saints Gregory didn't write the Presantified Liturgy. The structure, the style and the canons of that liturgical practice are very far from the Latin-Roman tipikon.
×