Symbolic Lamb: Around the World, Christians Celebrate Easter With This Dish 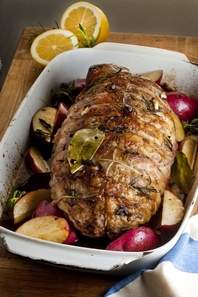 The lamb is closely identified with Jesus, whose resurrection is celebrated on Easter by believers. On one hand, Jesus is the "Good Shepherd" leading the flock to safety. He is also the "lamb of God" whose death takes away "the sins of the world."

"At Easter, the reference is to the self-sacrifice of Jesus," says Katerina Katsarka Whitley, author of "Around a Greek Table: Recipes & Stories Arranged According to the Liturgical Seasons of the Eastern Church" (Globe Pequot, $19.95). A resident of Vilas, N.C., she has written five books with religious or biblical themes.

So strong is that symbolism at Easter, the lamb can appear in many other edible forms besides meat. There's the butter shaped like the Easter lamb in Poland. In France, there's the agneau pascal, a lamb cake dusted with powdered sugar, while the Czechs bake a lamb-shaped cake called a baranek, and decorate it with frosting or glazes.

The lamb symbolizes innocence, intelligence and obedience for the Rev. Leo Patalinghug, who is starring in a new 13-week cooking series called "Savoring Our Faith" on the EWTN Global Catholic Network.

Yet, lambs are still slaughtered for food. That makes us feel sad because the lamb is "such a cute little thing," says Patalinghug, a professor of pastoral theology at Mount St. Mary's University in Emmitsburg, Md. That's why the lamb is a symbol for Jesus to underscore the depth of the sacrifice.

"There's a tenderness to the lamb, it is the type of relationship God has with his people," adds Patalinghug.

Tenderness, of course, has a culinary meaning too. The Easter lamb of Greece is very young, fed with milk and wild herbs that delicately flavor the meat, says Whitley, who was born in Thessaloniki.

"The shepherds bring them into the villages and towns just before Easter," she writes. "According to Greek Orthodox tradition, no meat is eaten during the forty days of Lent by the observant. So the lambs are ready, and the people are ready for them."

This is the traditional Easter meal of Katerina Katsarka Whitley's childhood, she writes in "Around a Greek Table."

Heat oven to 375 degrees. Open a few gashes in the meat with a sharp knife; push the slivered garlic deep inside them. Do the same with the rosemary. Place the meat in a large baking pan. Rub meat with lemon halves; season with salt and pepper to taste. Place the bay leaf next to the lamb. Baste meat with some of the melted butter. Pour ½ cup water around the meat.

Bake, 1 hour. Add the potatoes all around the meat; pour the tomato paste mixture over the potatoes. Sprinkle with remaining butter, juice from the lemon halves and oregano. Bake, until internal temperature reaches desired doneness, 145 degrees for medium-rare, 1 hour. Allow to rest 15 minutes before carving.

This recipe from "Savoring the Faith," the Rev. Leo Patalinghug's new cooking series, calls for frenched lamb chops, which are trimmed so the long rib bone is largely free of meat or fat. Many markets sell the chops already frenched or ask the butcher to do it for you.

Heat oven to 375 degrees. Score the fatty part of the rack crosswise. Drizzle with 2 teaspoons olive oil; massage oil over entire rack. Season with ½ teaspoon salt and pepper to taste. Combine breadcrumbs and rosemary on a plate; dredge rack in the mixture.

Heat remaining 1 teaspoon olive oil in an oven-safe skillet over medium heat. Cook the lamb, fatty side down, until golden brown, 2-4 minutes. Turn the lamb; place skillet in oven. Cook until the internal temperature is 145 degrees (medium rare), 10-12 minutes. Remove rack from skillet; let rest at least 5 minutes before cutting into chops.