Judas stretched forth his hand to the lawless. She sought the remission of her sins, while he took the pieces of silver. The harlot brought myrrh to anoint the Lord; the disciple made an agreement with the lawless. She rejoiced when she spent the precious myrrh; he set out to sell Him who has no price. She recognized her Master, while he departed from his Master. She was freed from sin, but he became the captive of sin. 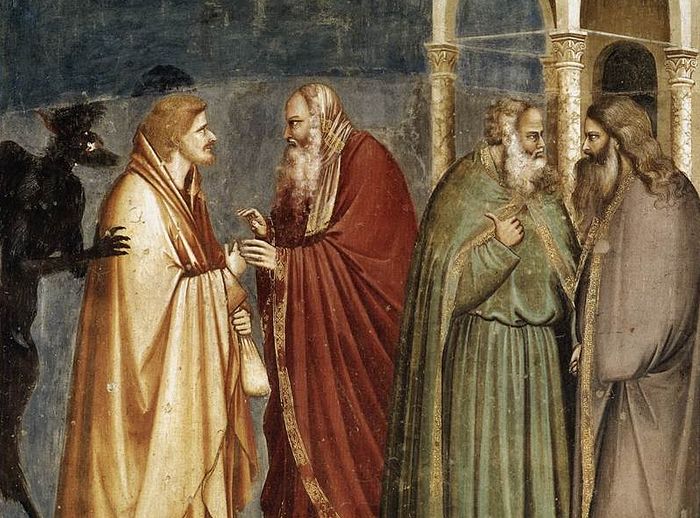 On Tuesday night the Lord was in Bethany. Here, in the house of Simon the Leper, while the council of the high priests, scribes and elders had already decided to take Jesus Christ by subtlety and kill Him, a certain woman, a “harlot”, poured precious myrrh on the Savior’s head and thus prepared Him for burial, as He Himself spoke of her deed. Now, as an action contrary to the sinful woman’s unmercinary act, a criminal intention was born in the ungrateful soul of Judas, one of the twelve disciples of the Savior, to betray his Teacher and Lord to the lawless council. Therefore, in the Church service for Great Wednesday the sinful woman is glorified, and Judas’ love of money and betrayal is cursed and condemned.

On the day of the Lord’s betrayal to suffering and death for our sins, when He forgave the sins of the harlot, the Church reads at the end of the hours, according to an ancient custom, this prayer: “O Master, plenteous in mercy, Lord Jesus Christ God…”. This is the prayer read throughout Great Lent at the end of Compline, as all kneel with heads bowed while the priest intercedes before God that He grant us remission of our sins. On Great Wednesday, the Liturgy of the Presanctified Gifts is served for the last time, at which the Church proclaims the woman who anointed the Lord with myrrh, and also Judas’s betrayal (Mt. 26:6-16). On Great Wednesday we finish making the full prostrations appointed at the prayer of St. Ephraim the Syrian: “O Lord and Master of my life…” After Wednesday, this prayer is read only by monastics in their cells until Great and Holy Friday. Thus, the prayer of St. Ephraim the Syrian begins on Wednesday of Cheesefare Week, and ends on Wednesday of Holy Week.

Hymn from the Service on Holy and Great Wednesday

The woman who had fallen into many sins, Perceiving Thy divinity, O Lord, fulfilled the part of a myrrh-bearer; and with lamentations she brought sweet-smelling oil of myrrh to Thee before Thy burial. “Woe is me”, she said, “for night surrounds me, dark and moonless, and stings my lustful passion with the love of sin. Accept the fountain of my tears, O Thou who drawest down from the clouds the waters of the sea. Incline to the groanings of my heart, O Thou who in Thine ineffable self-emptying hast bowed down the heavens. I shall kiss Thy most pure feet and wipe them with the hairs of my head, those feet whose sound Eve heard at dusk in Paradise, and hid herself for fear. Who can search out the multitude of my sins and the abyss of Thy judgments, O Savior of my soul? Despise me not, Thine handmaiden, for Thou hast mercy without measure.

Stichera (by Kassiani the Nun)

The Gospel of St. Matthew

Now when Jesus was in Bethany, in the house of Simon the leper, There came unto him a woman having an alabaster box of very precious ointment, and poured it on his head, as he sat at meat. But when his disciples saw it, they had indignation, saying, To what purpose is this waste? For this ointment might have been sold for much, and given to the poor. When Jesus understood it, he said unto them, Why trouble ye the woman? for she hath wrought a good work upon me. For ye have the poor always with you; but me ye have not always. For in that she hath poured this ointment on my body, she did it for my burial. Verily I say unto you, Wheresoever this gospel shall be preached in the whole world, there shall also this, that this woman hath done, be told for a memorial of her. Then one of the twelve, called Judas Iscariot, went unto the chief priests, And said unto them, What will ye give me, and I will deliver him unto you? And they covenanted with him for thirty pieces of silver. And from that time he sought opportunity to betray him.

Homily on the Gospel of St. Matthew 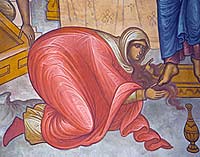 And whereas all the others were coming unto Him for the healing of the body alone, she came unto Him by way of honor only, and for the amendment of the soul. For neither was she at all afflicted in body, so that for this most especially one might marvel at her.

And not as to a mere man did she come unto Him; for then she would not have wiped His feet with her hair, but as to one greater than man can be. Therefore that which is the most honorable member of the whole body, this she laid at Christ's feet, even her own head…

They used to hear their Master saying, "I will have mercy, and not sacrifice," and blaming the Jews, because they omitted the weightier matters, judgment, and mercy, and faith, and discoursing much on the mount concerning almsgiving, and from these things they inferred with themselves, and reasoned, that if He accepts not whole burnt offerings, neither the ancient worship, much more will He not accept the anointing of oil. But though they thus thought, He knowing her intention suffers her. For indeed great was her reverence, and unspeakable her zeal; wherefore of this exceeding condescension, He permitted the oil to be poured even on His head. For if He refused not to become man, and to be borne in the womb, and to be fed at the breast, why do you marvel, if He does not utterly reject this? For like as the Father suffered a savor of meat, and smoke, even so did He the harlot, accepting, as I have already said, her intention…

And while of countless kings and generals the noble exploits even of those whose memorials remain have sunk into silence; and having overthrown cities, and encompassed them with walls, and set up trophies, and enslaved many nations, they are not known so much as by hearsay, nor by name, though they have both set up statues, and established laws; yet that a woman who was a harlot poured out oil in the house of some leper, in the presence of ten men, this all men celebrate throughout the world; and so great a time has passed, and yet the memory of that which was done has not faded away, but alike Persians and Indians, Scythians and Thracians, and Sarmatians, and the race of the Moors, and they that dwell in the British Islands, spread abroad that which was done secretly in a house by a woman that had been a harlot.

Great is the loving-kindness of the Lord. He endures an harlot, an harlot kissing his feet, and moistening them with oil, and wiping them with her hair, and He receives her, and reproves them that blame her…

Then went one of the twelve, he that was called Judas Iscariot, unto the chief priests, and said unto them, What will you give me, and I will deliver Him unto you? Then. When? When these things were spoken, when He had said, it is for my burial, and not even thereby was he moved to compunction, neither when he heard that the Gospel should be preached everywhere did he fear (and yet it was the language of unspeakable power), but when women showed so much honor, and women that had been harlots, then he wrought the devil's works…

So great an evil is covetousness, this made him both a traitor, and a sacrilegious robber. Hearken, all you covetous, you that have the disease of Judas; hearken, and beware of the calamity. For if he that was with Christ, and wrought signs, and had the benefit of so much instruction, because he was not freed from the disease, was sunk into such a gulf; how much more shall you, who do not so much as listen to the Scripture, who are constantly riveted to the things present, become an easy prey to this calamity, unless you have the advantage of constant care. Every day was that man with Him, who had not where to lay His head, and every day was he instructed by deeds, and by words, not to have gold, nor silver, nor two coats; and yet he was not taught self restraint; and how do you expect to escape the disease, if you have not the benefit of earnest attention, and dost not use much diligence? For terrible, terrible is the monster, yet nevertheless, if you be willing, you will easily get the better of him. For the desire is not natural; and this is manifest from them that are free from it. For natural things are common to all; but this desire has its origin from remissness alone; hence it takes its birth, hence it derives its increase, and when it has seized upon those who look greedily after it, it makes them live contrary to nature. For when they regard not their fellow countrymen, their friends, their brethren, in a word all men, and with these even themselves, this is to live against nature. Whence it is evident that the vice and disease of covetousness, wherein Judas, being entangled, became a traitor, is contrary to nature. And how did he become such a one, you may say, having been called by Christ? Because God's call is not compulsory, neither does it force the will of them who are not minded to choose virtue, but admonishes indeed, and advises, and does and manages all things, so as to persuade men to become good; but if some endure not, it does not compel. But if you would learn from what cause he became such as he was, you will find him to have been ruined by covetousness.

And how was he taken by this calamity? One may say. Because he grew remiss. For hence arise such changes, as on the other hand, those for the better from diligence. How many for instance that were violent, are now more gentle than lambs? How many lascivious persons have become afterwards continent? How many, heretofore covetous, yet now have cast away even their own possessions? And the contrary again has been the result of remissness…

And all these things have I said, to show that if we be vigilant, no one shall harm us; and that the harm arises not from poverty but from ourselves. Wherefore I beseech you with all diligence to put away the pest of covetousness, that we may both be wealthy here, and enjoy the good things eternal, unto which God grant we may all attain, by the grace and love towards man of our Lord Jesus Christ, to whom be glory world without end. Amen.

Rdr Andreas Moran4/27/2016 12:54 pm
Why an illustration (not an icon, of course) by Giotto, the founder of the degeneracy of western religious art? Is there a lack of suitable Orthodox icons?
×