" For Judgment I am Come into this World..." 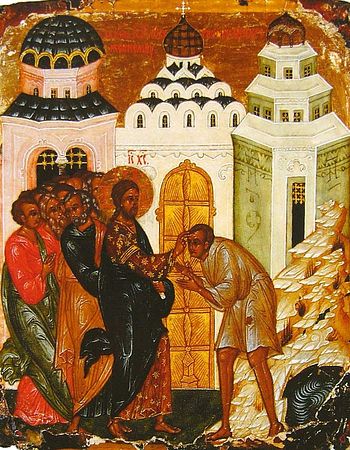 Healing of the blind man.
Today we heard at the Divine Liturgy the account of the Holy Evangelist John the Theologian about the healing by Jesus Christ of the man born blind, that is, who had never seen anything before. It is characteristic that, when this Gospel account ends, the Lord said: “For judgment I am come into this world, that they which see not might see; and that they which see might be made blind” (Jn 9:39). And His spiteful enemies, the scribes and Pharisees, probably with irony and mockery, asked Him: “Are we blind also?” (Jn 9:40). And they received an answer, as the Lord told them: “If ye were blind, ye should have no sin” (Jn 9:41), because if a person does not know and does not see, he cannot transgress consciously and does not sin so greatly. Even if he makes a mistake, the Lord Himself does not find it a sin, if the person did not know he was sinning. So the Lord spoke, “If ye were blind, ye should have no sin, but now ye say, We see; therefore your sin remaineth” (Jn 9:41).

Remember, this is a frightful sentence, because it was pronounced by the One who alone can justify or condemn, and He said their sin remained. Our Lord Jesus Christ gave the former blind man not only physical, but also spiritual vision. At the same time, the Gospel illustrates how, by their determination, Christ’s enemies are blinding themselves all the more, persisting in their delusions.

When the Lord healed the blind man, he was asked how it had happened. He said that he could not answer this question: he had been blind when the Lord approached Him. Probably he had heard what the Savior’s name was, which is why he answered: “A man that is called Jesus made clay, and anointed my eyes, and said unto me, Go to the pool of Siloam, and wash: and I went and washed, and I received sight” (Jn 9:11). They asked him who Jesus was, and he said “I know not” (Jn 9:12). He was led to the Pharisees, and they examined him. He said shortly: “He put clay upon mine eyes, and I washed, and do see” (Jn 9:15). Now there was a dispute between the Pharisees and Christ’s enemies, “a division among them,” as is said in the Gospel (Jn 9:16). Some of the Pharisees said, “This man is not of God, because he keepeth not the sabbath day” (Jn 9:16), which means he did not obey the law. Others argued saying, “How can a man that is a sinner do such miracles?” (Jn 9:16). The former blind man hears this dispute and the truth becomes clearer and clearer to him. So the words of one of the group of Pharisees (how can a man that is a sinner do such miracles) becomes the guiding line for his further actions. He was asked again and again, and cross-examined, and as they kept asking the same questions, he finally told them: “I have told you already, and ye did not hear: wherefore would ye hear it again? will ye also be His disciples?” (Jn 9: 27). For them, rabid enemies of Christ, to be His disciples?! The man had no idea, of course, what a blow his words were to them. So they told him with spite and anger: “Thou art his disciple; but we are Moses' disciples. We know that God spake unto Moses: as for this fellow, we know not from whence He is” (Jn 9:28-29).

The Church, telling us today about this miracle of the Savior, at the same time chants in the person of each of us: “Blind with my spiritual eyes, I come to you, O Christ, like one born blind.” Not long ago we prayed to our Lord intensively: “Grant that I may see my own sins.” If we ask to see, to be able to see our sins it means we cannot see them as well as is needed. This is because our “spiritual eyes” are blind. This is why this church prayer is full of sense and meaning for each of us. The Holy Fathers also always say that people cannot see their sins as clearly as they should.

A long time ago we already gave this example from one ascetic’s life, who asked God to let him see to what extent human nature was corrupted by sin. And when the Lord, in a certain mysterious vision, revealed to him the degree to which man is corrupted by sin, the ascetic felt that he could lose his mind from fear, and he was begging God to hide this vision from him forever. This is the extent to which people are corrupted by sin. St. Macarius of Egypt said a person can be good, but deep in his soul the roots can be poisonous. Our Lord Jesus Christ came to heal us of this brokenness, because no other force in the world can heal us of this frightful corruption by sin. This is what current reformers of life forget and tend not to see when proposing their ideas. They forget, or do not know, that a person is a sinful creature. Therefore, as the Blessed Augustine said, people differ only in the extent to which each of them is evil. We should always realize how sinful and corrupt we are, and beg God to heal our soul’s eyes the way he gave physical and spiritual recovery to this former blind man about whom we heard. Amen.