Archbishop Antony of Borispol: A priest should know the works of great authors and poets. 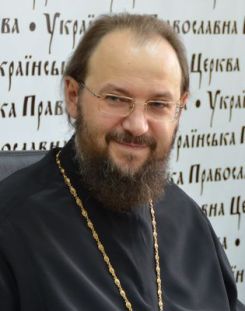 —Vladyka, you are a member of the Board of Trustees of the Patriarchal Sts. Cyril and Methodius Literary Awards. What do you think are the importance and significance of the Literary Awards today, and why do we need them?

—We are living in very complex times, when people are losing their moral points of reference. Those values and ideals that were inculcated in us through quality literature and poetry are now being replaced with the fetishes of the entertainment industry. Nowadays it is simply horrifying to see how the country that gave the world Pushkin, Gogol, and Dostoevsky is turning into a society of glamour rags and pop. However, despite the aggressive encroachment of tastelessness and vulgarity, interest in literature still lives in society. This is encouraging.

Internet, various electronic resources, film and television cannot replace a person’s acquaintance with a living book, and the activities of modern publishers are a clear affirmation of this. Furthermore, we cannot but note the large number of talented modern publicists, writers, and poets—those we all know and those whose works are known only to a narrow group of fans, on blogs, forums, and who read their works at literary evenings. One only has to look at the appropriate internet sites in order to be convinced of the enormous amount of creative people out there—innovators of the pen.

I think that these factors—on the one hand spiritual and moral degradation in society and the state of affairs in the market that dictate their conditions, and on the other hand an undying interest in creativity as a whole and in literature in part, the great significance of literature in the formation of integral personalities—are the leitmotifs of the institution of the Patriarchal Literary Awards. To discover literary pearls from out of the general mass, to determine the spiritual and moral reference points of modern culture, to fight against vulgarity and tastelessness—these, as I see it, are its objectives and significance. Another major objective is to seek out new names, writers who are capable of upholding the high standard of our great culture. For this, as Andrei Vosnesensky put it, we need “foremen of the spirit”:

Not on the street or on the radio,
I can hear with my inner hearing:
Accepting applications for
Foremen of the spirit!

We’re looking for unmercinaries
From Kushki to Udnelnaya!
We are the nation of Blok and Khlebnikov.
Can it be that we’ve gone dry?

—Should the Church be evaluating art? Should it express its preference, give particular acclaim of certain works and authors, or point out things that are unacceptable from the Orthodox standpoint? Wouldn’t this limit the author’s creativity?

—Only the absence of talent can limit an author’s creativity. If instead of a gift of God we see only ambition, then we might get instead of a masterpiece only kitsch and “action”, and sometimes plain vulgarity—that is, those things that are capable of catching the attention, creating a scandal, making noise and no more. If the author’s main goal is to spread his name and make as much money as possible, he can certainly use such methods. But they have nothing to do with literature and creativity. A real work of art—something great, eternal, and able to influence minds and transform souls—must come of suffering. It requires immense labor and God-given talent. As Vasily Kliuchevsky said, “talent is a divine spark with which a person usually burns himself, lighting the way for others with his own fire.”

No doubt the Church’s mission intersects with this, and this is its illuminating and directing role. It was the Gospels that influenced the formation of Slavic culture and morality, and our people’s mentality. The Orthodox Church has helped people separate the wheat from the chaff for centuries. Today our task is to point out the unacceptability of vulgarity and advertising in the sphere of creativity; to place moral reference points, so that culture would preserve its educational purpose and continue to serve in the mission of transfiguring man. Nicholai Vasilievich Gogol expressed this thought when he described the true goal of creativity: “To make this woeful earth into the forecourt of Heaven through one’s art.”

—But what criteria could be used (and could it in fact be used) to evaluate literature? What are your criteria for quality literary works?

—As the English writer and poet John Raskin said, “When love and mastery have united, you can expect a masterpiece.” I think that the main criteria for quality literary works are the inner response to what is read. This becomes possible if the author invests in creative work a little part of his own soul, all his love, talent, and skill. Time is also a global indication of a true work of art. What does not lose its relevance, what people in all different generations can appreciate, what throughout the ages without losing its relevance uplifts people and makes them think—that is true art.

—Are there literary history courses taught in the Kiev theological schools? What is the significance of this course in educating future pastors?

—There are several mandatory courses included in the program of the Kiev theological schools that are dedicated to creative literature. It must be noted that today we are faced with a very painful question concerning modern education. People come to the seminary who are poorly acquainted with even the classics, and we have to fill the gap. Without creative literature it is not possible to speak of full-fledged theological and cultural personal development. I cannot imagine a priest who has no knowledge of the works of the great writers and poets whose names are the pride and spiritual treasure of our nation. I am deeply convinced that the level of intelligence and culture of a young priest is directly dependent upon this issue.

—How can we cultivate our own literary taste? After all, it is not so easy to make sense of a huge number of texts, especially if we are talking not about world classics, but about the works of modern authors.

—Good taste is formed under the influence of good teachers. Whoever is acquainted with the works of the great masters of the written word will find it easier to distinguish a quality work from a surrogate. Besides, it is perfectly clear that indiscriminate consumption destroys good taste. A person should be choosey about his literary preferences, and very carefully select only worthy and healthy food for his mind.

—What literature do you personally prefer to read whenever you have the time?

—My favorite writers are Dostoevsky, Chekhov, and Nechui-Levitsky. Of the modern authors, the names Valentine Rasputin and Vladimir Kuprin stand out. I am also overjoyed with the appearance of a literary genre that could be called, “priest’s prose”. I have always read with great pleasure the stories of Archpriest Nicholai Agaphonov, Archpriest Mikhail Shpokyansky, and Priest Yaroslav Shivova. And I cannot but mention the book by Archimandrite Tikhon (Shevkunov), Everyday Saints, which made a great impression on me.