Sermon on the Ascension of the Lord 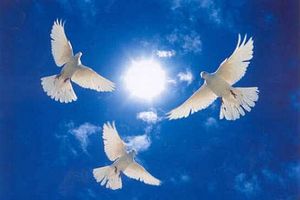 “I am with you, and no one can be against you,” says the Lord to everyone who believes in Him. No sorrows, no temptation, not even the most terrifying catastrophes should break the believer whose faith unites him in spirit with Christ. Here in Sretensky Monastery we have before us the relics of St. Hilarion (Troitsky); most of you here today have read in his Life how he celebrated the Paschal services in Solovki concentration camp. Bereft of basic human rights, tortured and mocked, the threat of death hanging over them at every moment, these prisoners celebrated the triumph of the power of One upon Whom they placed all their hope.

In this world, outward triumph means nothing—most important is inward triumph. Outward triumph will be given to Christ’s Church at the Second Coming of our Lord Jesus Christ. Our example of spiritual, inner victory is the life of our Savior. Outwardly He was defeated, crucified like an evil-doer and thief. But He accomplished the main thing for which He came into the world—His triumph over death; and any other triumph is meaningless in comparison. It was a triumph over the most fearsome and unconquerable evil that exists in the world. O death, where is thy sting? O grave, where is thy victory? (1 Cor. 15:5). This is the victory that overcometh the world, even our faith (1 Jn. 5:4). Thus proclaim the Apostles, who beheld with their physical eyes our Lord and Savior Jesus Christ’s ascetical labor of love for the human race.

This, brothers and sisters, is what I would like to say today. But how very different we are from those new martyrs and saints who overcame the world! When we stand before God to repent of our evil and sins, our confession from year to year becomes less and less like a confession and more and more like a faint-hearted cry and complaint against life. The great power of Christianity is forgotten; we have forgotten that we must be conquerors in this world—conquerors of evil. Constant complaints about our neighbors, about our life circumstances, endless depression and despair—these things are woefully conquering the Orthodox Christian today.

Faintheartedness instead of courage is becoming a major quality of the soul of modern man. In your patience possess ye your souls (Lk. 21:19). Many people, even in the Church, are forgetting about this patience and courage, forgetting that everything on this earth is sent from the Lord, even in these particular circumstances that God has called us to be in; forgetting that we must labor and force ourselves patiently and courageously. People seek a compromise, an easy path and self-justification, and as a result the Christian spirit is lost. However, a fearful Christian is not pleasing to the Lord. The spirit of God departs from such a person and leaves him one on one with his helplessness, his frailty, his terrible despondency, when instead he should be gaining at long last the wisdom to thank the Lord for all the trials He has sent; thank Him, because a true knowledge of God comes only through thanksgiving. Fallen man cannot come to know God in any other way.

Today at the beginning of Divine Liturgy we heard in the antiphonal verses the words of the Psalmist: God is known in her towers, when He cometh to help (Ps. 47:3) [in Church Slavonic, the word “tower” is expressed as tyazhest, which means, burden, difficulty]. God is known in the trials and difficulties of life. After we have endured these at times long drawn-out trials that nevertheless teach us patience, God manifests His power—When He cometh to help. In this is the great mystery of the knowledge of God, the mystery of the Cross, and the meaning of human suffering. In your patience possess ye your souls, the Lord commands us.

We can endlessly despond, complain, and distort the very sacrament of confession by judging our neighbors, murmuring against God, and forgetting to judge the one who is most at fault for our problems: ourselves. Such a person becomes a barren fig tree. And it will go on this way until we begin to judge ourselves, give thanks to God for everything He sends us, understanding that every moment of life, every day for an Orthodox Christian is a step leading us to the Lord in the Kingdom of Heaven. It is these temptations, sent from God to each one of us, to our souls, with our illnesses, with our frailties that our souls need to overcome in order to ascend to immortality.

There once lived a monk in a monastery, where thirty brothers liked him but three did not, and the latter constantly insulted and hurt him. Out of faintheartedness that monk decided to leave the monastery, hoping to find a better situation. He moved into another monastery, but there he found twenty brothers who liked him, and five who treated him with contempt. Again he could not bear it and moved to another monastery. In this new monastery there were three brothers on his side, and twenty against him. And so on… When he had completely run out of strength and finally understood the peril of this fruitless cycle, he stopped at the door of the first monastery that he found on his path, took a piece of parchment and wrote on it: “Stay here in this monastery and endure everything.”

So it happened there that several brothers received him happily and peacefully, while several others, at the instigation of the devil, simply hated him. Each time he was faced with temptation from them he would take out his scroll and read it until he felt at peace, and then resolve to endure to the end everything that should come his way. The brothers who felt suspicious of him went to the father superior and said, “Abba, that new monk is a sorcerer. He has a magic spell written on a piece of parchment. We have to kick him out of the monastery.” Now, the Abba was a wise man. He came to the brother one evening while he slept, and because he was invested with authority as the father superior, he opened the scroll and read it, only to find those words encouraging patience.

The next day the father superior called the monk and the other brothers who were against him and said, “What do you have to say against this brother?” They said, “He is a sorcerer.” The Abba asked the brother, “What do you have to say about this?” “Forgive me, brothers!” said the now patient monk, bowing to their feet. “Throw him out! He has admitted it!” said his accusers. The Abba again asked the monk, “Now what do you have to say?” The monk again said, “Forgive me, fathers and brothers. As you decide, Abba, so shall it be.” Then the father superior said, “Take his scroll and read it, then do with him whatever you wish.” The brothers took the parchment and read, “Stay in this monastery, and no matter what happens, endure it all.” Then the brothers were ashamed and asked forgiveness of the Abba. The Abba said, “Why are you asking my forgiveness? Ask God for forgiveness for yourselves and for your souls, and ask it also of this brother.”

We cannot call ourselves Christians and remain fainthearted. We cannot hope to be together with Christ in the Kingdom of Heaven, whence he ascended on this fortieth day of Pascha, without being, according to our strength, His co-strugglers on the way of the cross—the way of our Lord, who was incarnate, was crucified and ascended for the sake of each of our souls.

May the Lord grant that on this feast of the Ascension our souls might ascend to a joyful life in this world, to true Christian courage, to patience that triumphs over evil and despondency, and endurance of all trials and sorrows, just as the Holy Hieromartyr Hilarion endured. It is audacious and sinful before God to be depressed in this beautiful and wondrous world, which the Lord created for us and through which He leads us to an even more beautiful and wondrous world—the Kingdom of Heaven. Amen.

Sally Iloff6/16/2016 7:54 am
Such beautiful words! God bless this man of yours to serve you and the community in the name of Christ!
×