The Ascension and the Glorification of Man 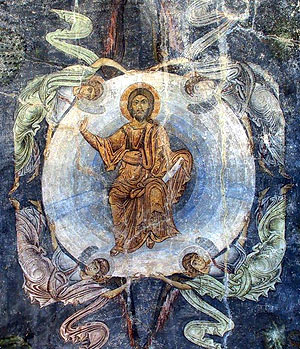 Looking at church history, one can see why. Starting early on and heating up dramatically in the fourth century, the Church was swamped with rival and alternative views of who Jesus of Nazareth was. Arius made headlines in the fourth century by suggesting that Jesus was a creature, like all the other creatures made by God, only perhaps a bit more exalted, like an angel on steroids (my description not his). For Arius, Jesus was only divine in an honorary sense, like a citizen being made “King for a day”. In dealing with the distortions of Arius, the Church turned with gratitude to the emphatic clarity of John’s Gospel. That Gospel opens with a ringing assertion of Christ’s divinity (“In the beginning was the Word, and the Word was with God, and the Word was God”), and climaxes with a confession of the same (as Thomas falls down before Jesus, crying out, “My Lord and my God!”) From the fourth century on, the primacy of John’s Gospel was assured. Faced with the swarming multitude of heresies, the Church would continue to declare the divinity of its Saviour, and refer to Him almost reflexively as “Christ our true God”.

This is good. But it should not allow us to miss the significance of Him being “Christ the true man” as well. Orthodox theology, formed by its response to the challenges and heresies it faced, takes a theological approach to Jesus: we think of Him primarily as the pre-eternal and divine Word who later became a man for our sake. But the earliest disciples did not begin that way. They began with a phenomenological approach to Him. That is, they first knew Him as a man like them, truly and completely human, and (what’s more) authentically Jewish. For like His first disciples, Jesus referred to the God of Israel as His God (compare His cry from the cross in Mk. 15:34 and His post-resurrection reference to His God in Jn. 20:17). He prayed to God as all His fellow Jews did, and taught that the Law’s greatest commandment was to love the God of Israel (Mk. 12:29-30). They went to on discover and proclaim that this Man was also divine.

We do well to remember this, because often we tend to secretly embrace a kind of crypto-docetism. (“Docetism” is the name given to the view that Jesus was not truly human, but that He only seemed—Greek dokeō—to be so.) We Orthodox Christians today easily remember that Jesus is divine. We remember less easily that He is also completely human. It is as if Christ assumed our humanity at Bethlehem, and then left it behind like a used suit of clothes at His Ascension. It is not so: the humanity which He assumed for our sake at His Nativity, He keeps forever.

It is especially important to remember this at the Feast of the Ascension, for the Ascension is not only the triumph of God, but even more the triumph of Man. We do not glorify God by belittling man and denying humanity its proper glory. Humanism, with its emphasis on the splendour of the human person, at least gets that right. Man is glorious, and splendid, and worthy of praise. He has debased himself through sin and selfishness, but the glory remains, like gold that is covered over with a layer of dirt. This is the point of the psalmist in Psalm 8: “What is man, that You remember him, and the son of man, that You care for him? You have made him a little lower than God, and crown him with glory and majesty”. The glory of man remains, whether or not one translates the Hebrew elohim in this passage as “God” or “the angels”. Man retains his kingly position in earthly creation either way, and stands just slightly lower than those in heaven, because God “has put all things under his feet”.

The Church has always proclaimed that Man’s ultimate glory and destiny find fulfillment in Jesus. He is the Son of Man to whom God subjects all things, putting them under His feet. He is the One whom God crowned with glory and honour (see Heb. 2:6-9), the true and representative Man ruling over all creation. And the moment of this crowning, this final and supreme exaltation, was the Ascension.

That is the true meaning of the Ascension, and why the Ascension represents the triumph of man. In Jesus, Man assumes the throne God prepared for him, reigning finally and truly as king over the rest of creation. In the ascended Christ, sitting at God’s right hand to rule the cosmos with Him, Mankind finds its true destiny and glory and goal.

The Ascension however also reveals that this true glory comes from submitting to God’s will. Humanism rightly sees that man is a glorious being, but it errs in supposing that man can be glorious while rebelling against God. Secular humanism (there have been many varieties of humanism throughout the years) even declares that man’s glory consists in rebelling against God. All this is futile. Man finds his true dignity while kneeling before God; his true calling in gratefully adoring Him.

Psalm 8 reveals this, as does the example of Jesus. In Psalm 8, we see that it was God who “made man a little lower than elohim” (v. 5); it was God who made him rule over the works of His hands, and put all things under his feet” (v.6). Man did not attain to such heights by his own effort, by a kind of “triumph of the will” (to quote an old and horrifying documentary). Man does not glorify himself by pulling himself up by his Pelagian bootstraps (it was Pelagius who seemed to downplay our need for God). It is God who glorifies him, as His gift, as man submits in love to His will.

The life of Jesus reveals this also. Christ the Man always did the will of His Father, even though it cost Him His sweat and blood in the Garden of Gethsemane and on the Cross. In obedience “He offered up both prayers and supplications to Him who was able to save Him from death, and was heard because of His piety” (Heb. 5:7). It was because of this obedience and humility before the divine will, this saving self-emptying, that “God highly exalted Him and bestowed on Him the Name which is above every name” (Phil. 2:8-9). First came the Cross, and only then, the Crown; first the kneeling tears in the Garden, and only after that, the sitting at the Right Hand. Christ’s glory was the fruit of His humility, and of His obedience to the Father’s will. He proved Himself true Man when He knelt and prayed; He proved Himself true Man when He turned from His own will to the Father’s. And because of this human obedience, God exalted Him, raising Him from the dead and bringing Him to His right hand in glory.

Christ’s ascended glory therefore points the way home for us as well. The glory that Christ was given by the throne of His Father is the same glory that He will share with us (see Rev. 3:21). But we must follow in the footsteps of His humility if we would arrive finally at His glorious goal. The Ascension calls us to be authentically human, to fulfill our destiny by serving and loving God. The Man Christ Jesus has not only revealed the glory of the Father. He also revealed the true glory of humanity as well.


Therefore, you will die like children of men and you will fall like each of the princes.