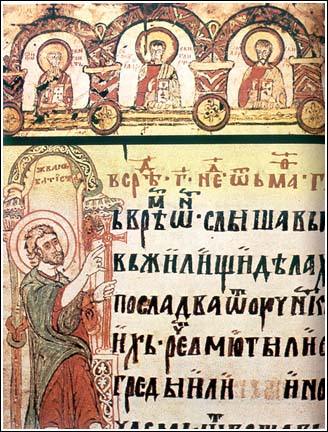 Miroslavs Gospel, one of the oldest surviving documents in Church Slavonic. (U.S. pulic domain)
As the Russian Orthodox Church celebrates the “Days of Slavic Culture”, which yearly begins on the feast of Sts. Cyril and Methodius (May 11/24), Pravoslavie.ru/OrthoChristian.com would like to note a useful website created as an aide to anyone interested in learning more about the Church Slavonic language. This language has liturgically united Russian, Ukrainian, Serbian, Bulgarian, and other Slavic Orthodox peoples for many centuries. Many modern converts to Orthodoxy also attend churches that use this liturgical language. Contemporary Slavs rarely study Church Slavonic language academically; they find that they begin to understand it naturally according to their zeal for attending services and praying in this language of their fathers, the language of their saints. It is encouraging to see that resources are appearing for the benefit of those who would like to know more about Church Slavonic but have no previous knowledge of any Slavic language.

Here is information taken from the website of the Orthodox Electronic Publishing Society about Church Slavonic, and the patron saints of Slavic cultural heritage, Cyril and Methodius.

Church Slavonic is a rich and vibrant part of our Orthodox heritage. This liturgical language is not simply a remnant of our Orthodox past but part of the very fabric of our communal worship of God today. All Slavic Orthodox Churches were influenced by Slavonic. Our rich hymnography and music are imbued with its rhythm and meter. While English translations and musical arrangements have made huge strides in conforming to traditional Orthodox style, rarely do they approach Slavonic's spiritual majesty and splendor.

Although Slavonic is far from extinct in its usage, there is a natural pressure in America to use English in the Divine Services. English speaking converts and even many "cradle Orthodox ", immigrants and American-born alike, have little understanding of Church Slavonic. Having spent my youth hearing Slavonic every Sunday, it is only now in adulthood, and some twenty years away from the Church, that I finally have come to understand the Divine Services after participating in services in English. Early in my return to the Church I found myself constantly saying "oh... this is what that means" as I regularly discovered something new in the services. Like it or not, services in English are crucial to bringing American Orthodox in step with traditional Orthodoxy. However, it would be a great tragedy for us to loose touch with this fundamental part of our spiritual heritage.

In reality few of us have the time, motivation, nor perhaps the ability to assimilate a new language, particularly one as esoteric as Slavonic. Yet, some might welcome the chance to learn a prayer or two in Slavonic. The Church Slavonic E-Tutor was developed with this in mind. Its purpose is to help make Slavonic more accessible and, God willing, promote interest in preserving its usage.

Saints Cyril and Methodius were missionaries and linguists, known as the "Apostles to the Slavs". They were brothers and members of a noble family of Thessaloniki. St. Cyril (actually known as Constantine until shortly before his death when he was tonsured a monk) was librarian of the great cathedral of Hagia Sophia in Constantinople until 860, when he resigned to join St. Methodius, the abbot of a Greek monastery, in missionary journeys to the Khazars and the Bulgarians.

In 862, Emperor Michael III sent them to Moravia, where they taught and celebrated the liturgy in the Slavonic vernacular, now known as Old Church Slavonic. To translate the Bible into this previously unwritten language, the brothers constructed a script for Slavonic known today as glagolithic. Glagolithic is considered by some as the precursor of Cyrillic. The Cyrillic alphabet used in modern Slavic languages is often attributed to St. Cyril, but it was probably the work of his followers.

St. Cyril died in Rome, where the brothers had gone to defend themselves against German leaders who wanted to enforce the use of the Latin liturgy among the Slavs. St. Methodius was consecrated an archbishop and later returned to Moravia as a papal legate.

A Few Words About This Program

This project has been undertaken with the humble intent of helping those interested in learning Slavonic. It does not purport to be an authoritative resource. As always, it is best to consult one's Spiritual Father or priest before undertaking the study and use of Slavonic in one's prayer life.

Mary Greenwood6/25/2021 8:55 pm
I would like to obtain if possible translations of Liturgical prayers (Liturgy, Vespers, Panikhidas, etc.) in Slavonic/Russian but printed in LATIN LETTERS so I can pronounce them and fully participate in Russian and Serbian parishes. I use the library, do not have computer. Is there something I can order/purchase? Thank you!

Catherine M5/13/2017 3:48 am
The remarkable choral music of Russian Orthodox Churches is truly amazing....so different from English singing accompanied by instruments.
As a child, I learned the Russian alphabet ''ABV'' and the 'archaic historic' Russian letters are beautiful too..

Karen Elarionoff9/8/2014 12:01 am
I was born and baptized Russian Orthodox at St. Spiridons in Seattle. After many years I have returned to the Orthodox faith. I would like to learn church Slavonic so I can read the church fathers. My Russian language is very limited but I am eager.

I am an American convert to The Orthodox Church and Faith. I have been drawn from the outset to the Russian / Slav spirituality and historical place among the Orthodox as strong defenders of Tradition. Just wanted to thank you very much for making this educational opportunity available. I yearn to understand the language and culture of the Russian / Slav Orthodox in order to show a proper deference to my brothers and sisters in Christ, who are of that long and beautiful tradition and culture. I also hope to be instructed in the ways and understandings of that culture, since, after 61 years, I am quite done with the shallowness and banality of the West.

Many, many thanks for your hard work and charity,

May God bless you overwhelmingly,