Hieromartyr Hermogenes the Patriarch of Moscow and Wonderworker of All Russia 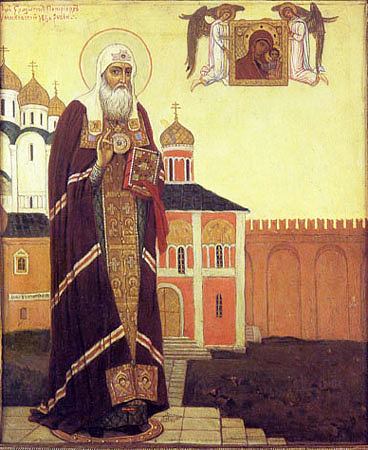 Patriarch Hermogenes of Moscow.
The Hieromartyr Hermogenes, Patriarch of Moscow and all Rus, was born in Kazan around 1530, and was descended from the Don Cossacks. According to the Patriarch's own testimony, he served as priest in Kazan in a church dedicated to St Nicholas (December 6 and May 9), near the Kazan bazaar. Soon he became a monk, and from 1582 was archimandrite of the Savior-Transfiguration monastery at Kazan. On May 13, 1589 he was consecrated bishop and became the first Metropolitan of Kazan.

While he was the priest at St Nicholas, the wonderworking Kazan Icon of the Mother of God (July 8) was discovered in Kazan in 1579. With the blessing of Archbishop Jeremiah of Kazan, he carried the newly-appeared icon from the place of its discovery to the Church of St Nicholas. Having remarkable literary talent, the saint in 1594 compiled an account describing the appearance of the wonderworking icon and the miracles accomplished through it. In 1591 the saint gathered newly-baptized Tatars into the cathedral church and for several days he instructed them in the Faith.

The relics of St Germanus, the second archbishop of Kazan (September 25, November 6, and June 23), who died at Moscow on November 6, 1567 during a plague, were transfered and buried in St Nicholas Church in 1592. With the blessing of Patriarch Job (1589-1605), St Hermogenes reburied the relics at the Sviyazhsk Dormition monastery.

On January 9, 1592 St Hermogenes addressed a letter to Patriarch Job, in which he asked for permission to commemorate in his See of Kazan those Orthodox soldiers who gave their lives for the Faith and the nation in a battle against the Tatars. In the past, it was customary to enter into the diptychs the names of all Orthodox warriors who had fallen in battle, and to commemorate them.

At the same time he mentioned three martyrs who had suffered at Kazan for their faith in Christ, one of whom was a Russian named John (January 24) born at Nizhny Novgorod and captured by the Tatars. The other two, Stephen and Peter (March 24), were newly-converted Tatars.

The saint expressed regret that these martyrs were not inserted into the diptychs read on the Sunday of Orthodoxy, and that "Memory Eternal" was not sung for them. In answer to St Hermogenes, the Patriarch issued a decree on February 25, which said: " to celebrate at Kazan and throughout all the Kazan metropolitanate a panikhida for all the Orthodox soldiers killed at Kazan and the environs of Kazan, on the Saturday following the Feast of the Protection of the Most Holy Theotokos (October 1), and to inscribe them in the great Synodikon read on the Sunday of Orthodoxy," and also ordered that the three Kazan martyrs be inscribed in the Synodikon, leaving it to St Hermogenes to set the day of their memory. St Hermogenes circulated the Patriarchal decree throughout his diocese, and required all the churches and monasteries to serve Liturgies, Panikhidas and Lityas for the three Kazan martyrs on January 24.

St Hermogenes displayed zeal in the faith and firmness in the observance of Church traditions, and he devoted himself to the enlightenment of Kazan Tatars with the faith of Christ.

In 1595, with the active participation of the St Hermogenes, the relics of the Kazan Wonderworkers St Gurias, the first archbishop of Kazan (October 4, December 5, June 20), and St Barsanuphius bishop of Tver (October 4, April 11) were discovered and uncovered. Tsar Theodore Ioannovich (1584-1598) had given orders to erect at the Kazan Savior-Transfiguration monastery a new stone church on the site of the first one, where the saints were buried.

When the graves of the saints were discovered, St Hermogenes came with a gathering of clergy. He commanded the graves to be opened and, when he saw the incorrupt relics and clothing of the saints, he notified the Patriarch and the Tsar. With the blessing of Patriarch Job and by order of the Tsar, the relics of the newly-appeared wonderworkers were placed in the new church. St Hermogenes himself compiled the lives of hierarchs Gurias and Barsanuphius.

Having been found worthy of the patriarchal throne, Metropolitan Hermogenes was elected to the primatial See, and on July 3, 1606 he was installed as Patriarch by the assembly of the holy hierarchs at Moscow's Dormition cathedral. Metropolitan Isidore handed the Patriarch the staff of the holy hierarch Peter, Moscow Wonderworker (October 5, December 21, August 24), and the Tsar gave as a gift to the new Patriarch a panagia, embellished with precious stones, a white klobuk and staff. In the ancient manner, Patriarch Hermogenes made his entrance riding upon a donkey.

The activity of Patriarch Hermogenes coincided with a difficult period for the Russian state: the appearance of the false Tsarevich Demetrius and the Polish king Sigismund III. The first hierarch devoted all his powers to the service of the Church and the nation.

Patriarch Hermogenes was not alone in this exploit: his self-sacrificing fellow-countrymen followed his example and assisted him. With special inspiration His Holiness the Patriarch stood up against the traitors and enemies of the nation, who wanted to spread Uniatism and Western Catholicism throughout Russia and to wipe out Orthodoxy, while enslaving the Russian nation.

When the imposter arrived at Moscow and settled himself at Tushino, Patriarch Hermogenes sent two letters to the Russian traitors. In one of them he wrote: "...You have forgotten the vows of our Orthodox Faith, in which we are born, baptized, nourished and raised. You have violated your oath and the kissing of the Cross to stand to the death for the house of the Most Holy Theotokos and for the Moscow realm, but have fallen for your false would-be Tsarevich ... My soul aches, my heart is sickened, all within me agonizes, and all my frame shudders; I weep and with sobbing I lament: Have mercy, have mercy, brethren and children, on your own souls and your parents departed and living ... Consider, how our nation is devastated and plundered by foreigners, who offer insult to the holy icons and churches, and how innocent blood is spilled, crying out to God. Think! Against whom do you take up arms: is it not against God, Who has created you? Is it not against your own brothers? Do you not devastate your own country?... I adjure you in the name of God, give up your undertaking, there is yet time, so that you do not perish in the end." In the second document the saint appeals: "For the sake of God, come to your senses and turn around, gladden your parents, your wives and children; and we stand to pray God for you..."

Soon the righteous judgment of God fell upon the Brigand of Tushino: he was killed by his own close associates on December 11, 1610. But Moscow continued to remain in peril, since the Poles and traitors, loyal to Sigismund III remained in the city. The documents sent by Patriarch Hermogenes throughout the cities and villages, exhorted the Russian nation to liberate Moscow from the enemies and to choose a lawful Russian Tsar.

The Muscovites rose up in rebellion, and the Poles burned the city, shutting themselves up in the Kremlin. Together with Russian traitors they forcefully seized Patriarch Hermogenes from the patriarchal throne and imprisoned him in the Chudov monastery.

The saint firmly replied, "What are your threats to me? I fear only God. If all our enemies leave Moscow, I shall bless the Russian militia to withdraw from Moscow; but if you remain here, I shall bless all to stand against you and to die for the Orthodox Faith."

While still in prison, the hieromartyr Hermogenes sent a final epistle to the Russian nation, blessing the liberating army to fight the invaders. The Russian commanders could not come to an agreement over a way to take the Kremlin and free the Patriarch. He languished more than nine months in dreadful confinement, and on February 17, 1612 he died a martyr's death from starvation.

The liberation of Russia, for which St Hermogenes stood with such indestructible valor, was successfully achieved. The body of the hieromartyr Hermogenes was buried in the Chudov monastery, but in 1654 was transferred to the Moscow Dormition cathedral. The glorification of Patriarch Hermogenes as a saint occurred on May 12, 1913.