“They that go down to the sea in ships, that do business in great waters;
These see the works of the Lord, and his wonders in the deep.”
Psalm 107:23,24 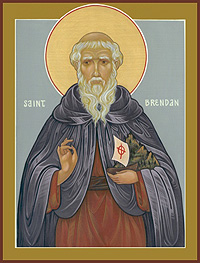 Icon of Saint Brendan, by Father John of the Hermitage of the Holy Cross
Our father among the saints Brendan was born about 484 AD to an Irish family near the present city of Tralee, County Kerry, Ireland. At a very young age he began his education in the priesthood and studied under St. Ita at Killeedy. Later he completed his studies under St. Erc, who ordained him in 512 AD.

During the next twenty years of his life, St. Brendan sailed all around the Islands surrounding Erie (Ireland), spreading the word of God and founding monastery after monastery. The most notable of these is Clonfert in Galway, which he founded around 557 AD, and which lasted well into the 1600s. St. Brendan died around 578 AD and his feast day is marked on May 16th.

Brendan’s first voyage took him to the Arran Islands, where he founded a monastery, and to many other islands which he only visited, including Hynba Island off Scotland, where he is said to have met Columcille (Columba). On this voyage he also traveled to Wales, and finally to Brittany, on the northern coast of France.

The event that St. Brendan is most celebrated for, however, is his voyage to the “Land of Promise”. Sometime in his early journeys, St. Brendan heard from another monk the story of a land far to the west, which the Irish claimed was a land of plenty.

He and a small group of monks including, possibly, St. Machutus, fasted for forty days, then set sail for this land in order to investigate and ‘convert’ the inhabitants. Altogether the journey took seven years.

In the ninth century, an Irish monk wrote an account of the voyage in the Navigatio Sancti Brendani (Voyage of St. Brendan). This book remained popular throughout the entire Middle Ages, and made Brendan famous as a voyager.

The account is characterized by a great deal of literary license and contains references to hell where “great demons threw down lumps of fiery slag from an island with rivers of gold fire” and “great crystal pillars”. Many now believe these to be references to the volcanic activity around Iceland, and to icebergs.

Upon reaching their destination, they engaged a guide who took them around the land. They went inland but were prevented from going further by a great river. Soon after this, St. Brendan, and the remainder of his colleagues sailed back to Ireland. Only a few survived the journey.

In modern times the story was dismissed as pure fabrication, but in the 1970′s a man named Tim Severin became fascinated with the story and decided to replicate St. Brendan’s journey. Severin built a boat made of hides tanned with oak bark just like the one described in the ancient text. The hides were sewn together over a bent frame of ash wood and the seams were sealed with animal fat and grease. With a group of volunteers he set sail for America and made his way to Newfoundland. His journey is covered in The Brendan Voyage: Across the Atlantic in a Leather Boat