"We Always Prayed For the Unity of Our Church." An Interview with Metropolitan Hilarion

A delegation of the Russian Orthodox Church Outside of Russia led by His Eminence Metropolitan Hilarion of Eastern America and New York visited Nizhny Novgorod Metropoliate as part of an official trip to Russia. After the death of Metropolitan Laurus, Vladyka Hilarion took the helm as Primate of the Russian Church Abroad. 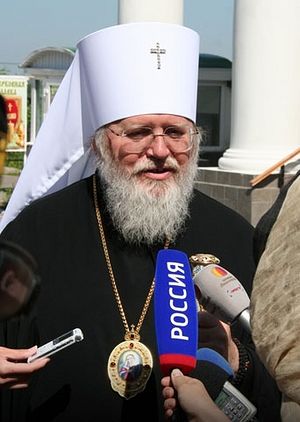 — Your Eminence, your delegation’s visit to Russia was devoted to the fifth anniversary of the signing of the Act of Canonical Communion between the two branches of the Russian Orthodox Church. Please tell us how this unification is manifested in real life. How do the hierarchs, clergymen and laity abroad view this?

— Thank God, our unity was established long ago. One can say that it happened even before the signing of the Act. The Russian people who live abroad mostly awaited unification, and prayed for it. And it was finally manifested in the form of the canonical act, because there remained no other obstacles—neither dogmatic nor historic—connected with the tragic events in the history of our country.

I can state with confidence that our unity is secure. There are very few who do not agree with unification, and these do out of ignorance or out of fear. We are very grateful to God that peace, understanding and concord have been established in our relationship. For us who live abroad it is a great benefit that we can now participate in joint divine services, we can travel to Russia, we have full spiritual communion with the Church in the Homeland.

So at the present time, a great many people come to Russia from the emigration on pilgrimages, and representatives of youth organizations participate in various conferences and assemblies. All this strengthens us, because we live abroad, in the midst of the heterodox world. Under these circumstances, it is very easy to merge with society of other nations, forgetting our faith, our ancestry. It is specifically the Church which enables one to preserve Russianness, the continuation of the spiritual history of our people.

At the same time, the Church does missionary work among the native populations, among those people who see truth in Orthodox Christianity. As a result, many people eagerly and very zealously convert to Orthodoxy.

For instance, in our Church—in the United States of America, Australia and other countries—there are many non-Russian clergymen. They understand Orthodoxy, they enroll in seminaries, some take up residence in monasteries, and so become missionaries to their own people. Many of them serve in our parishes, they conduct services in Church Slavonic, they study Russian, but deliver sermons in their own tongue. Obviously, this is a great missionary endeavor.

I think that the Russian people were scattered throughout the whole world by Divine Providence—it served towards the dissemination of the Orthodox Church as a whole, especially her Russian part. The Russian Church always performed missionary work, trying to bring the Light of Christ to other peoples. And with God’s help we continue this missionary service, and at the same time try to preserve the Russian people in the Orthodox faith, so that future generations would remember and know the faith of their ancestors.

Unfortunately, this is a big problem—some of our compatriots abandon church life and the Christian world view. But most of them persist in preserving their faith, their native language and traditions of the forebears.

— Would you agree with the notion that for the descendants of Russian emigres, especially for those who were born abroad, like you, for example, Russia has again become their homeland?—

I think that Russia always felt like the Homeland for all Russians abroad, both those who were forced to leave it, and those who were born abroad. We always considered it our Homeland, and now it has become a reality, we have the opportunity to visit. We feel completely at home here, we sense our bond with this land, and with the people living here. And of course the Orthodox holy sites, the churches, monasteries, the opportunity to communicate with the clergy, all of this warms our souls.

— Can one say that Diveevo and its holy relics, which is the focus of your visit to Nizhny Novgorod, is a unifying site, an attraction for Russians throughout the world?

— Of course, St Seraphim of Sarov is a beloved saint for many Orthodox Christians who live not only in Russia but in the diaspora. He is venerated everywhere by those who know of his ascetic labors and his life story, and they appeal to him for help. Everyone remembers that he called upon people to visit his gravesite and share their needs with him. So he hears us and will always help.

It is not only the Orthodox but many of other faiths who revere St Seraphim, amazed at his bright visage as that of a genuine Christian, a true podvizhnik, abiding in heaven. His renowned conversation with Motovilov is remembered by many as a remarkable lesson in the goal of Christian life. As St Seraphim said, the acquisition of the Holy Spirit is in fact the goal of our existence on earth. In other words, to enter the state of the Kingdom of Heaven while still on earth.

This is why visiting Diveevo, where his holy relics rest, and the history of this monastery as the Fourth Domain of the Mother of God serves to spiritually strengthen all Orthodox Christians, including our delegation during the celebration of the fifth anniversary of the unification of the two branches of the Russian Orthodox Church.

It was a great joy for us that it was specifically at Diveevo Convent, under the aegis of the Mother of God and with the prayerful intercession of St Seraphim of Sarov, that we first jointly prayed with Metropolitan George during our visit, and thus began the celebrations.

Diveevo Convent is a grace-filled, joyous place. Here the spirit of St Seraphim lives; he always cherished the joy of Pascha in his soul. Our sojourn in the convent was a wonderful, bright joy. We jointly celebrated Divine Liturgy with great spiritual enthusiasm, visited all of the monastery’s holy relics, walked along the famous Ditch together with Abbess Sergia, who was very hospitable to us.

— Is the practice of Orthodox Christianity in Russia and abroad different?

— Our divine services are generally the same as yours in Russia. Maybe there are nuances which don’t bear special significance. But the scope of church life in Russia, of course is much different—it is much larger than abroad. There are many parishioners and clergymen here, enormous churches, just as the country is vast. Abroad, everything is much more modest. We sing the same prayers in church as they do in Russia. We try to rear our children in love for their hereditary Russian culture. In particular, we remember and sing old Russian songs which you probably rarely hear. Abroad, of course, we have very humble parish schools, but they are a great help in educating our children.

— Vladyka, the Russian Orthodox Church was divided over 70 years ago. Only five years have passed since the time of its reunification. Is this enough in your opinion?

— It is and it isn’t. Because we sense the fullness of the church, her unity, and time has no meaning for us. In this unity we more fully sense the entire historical path of the Christian Church, its two-thousand-year-old existence on earth.

— What in your opinion did the division in the Church mean—was it a punishment from God or a tribulation which the Church endured with honor?

— The ways of the Lord are inscrutable. The Lord does everything for our own good, for our health, for repentance and healing, especially if such tribulations are sent for our sins. The division of our Church, of our people, occurred because of our sins, but it also brought us to purification through spiritual struggles and the blood of the martyrs. And we are certain that by the prayers of all the martyrs, confessors and saints now in the Kingdom of Heaven, our Church has been reborn. They saved through prayer this renascence, the new freedom our Church enjoys. It is now our task to be pious, to fulfill the commandments of Christ, so that a similar fate does not befall us.

Translation by the website of the Russian Orthodox Church Abroad