Homily on the 2nd Sunday after Pentecost – All Saints of Russia 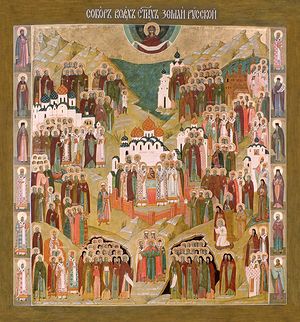 Icon of All the Saints of Russia.
Brothers and sisters, today the Holy Church opens before us our native heaven—all the Saints who shone in Russia. They shine as bright stars before us. And the first among them is St. Vladimir. He was a gifted military leader, statesman, a man of penetrating mind and strong will. The political situation among the Russian Slavs required just such a man. Many Slavic tribes were living at that time on the shores of the Dnieper River, and all of them had already been influenced by the Christian message—the dawn of a new life was approaching. Only our forefathers remained pagans. But by that time they too had lost faith in the pagan gods and actually had no religion at all. And the thirst for the One, True, Almighty God more and more strongly took possession of their souls. Vladimir himself was experiencing the same thing: his great soul was tired of the lie and, as a bird from its cage, was straining towards Truth, towards Light.

The same was required in the political situation as well; enlightenment and culture were in Christianity. Paganism was dying out and Christianity was becoming the new, all-powerful movement in contemporary culture and life. The acceptance of Christianity became a necessity, something which could not be put off if the Russian nation wanted to keep in step with other nations.

Vladimir began to act: he sent out his messengers to various countries to find out which faith was the best one. When they returned, they testified that the Orthodox religion of the Greeks was the best, the most full, and was truly the Apostolic Church. Vladimir made his decision. But he was too proud to go bowing to the Greeks and ask for baptism and guidance. He decided, as he always did in his life, to use the power of the sword, to conquer Christianity by force. He went to war with the Greeks, defeated them, and required of them two things: one was the Christian faith and baptism, and the second was the hand of the Greek Princess Anne, famous for her beauty and virtuous life. The Greeks, having no choice, agreed to both.

Vladimir was in the height of his glory. He had achieved everything he wanted, everything a man could achieve: the Christian religion, the beautiful Anne, the triumph of victory and with it incalculable riches, the glory of a victor and statesman, and the power of a dictator. Yes, it seemed he had everything.

The preparation for Holy Baptism was still going on, which to him might have seemed just a religious formality. Strictly speaking, he already had everything and was master of everything. But suddenly something terrible happened — he went blind. At that time there was no medical science. To go blind meant to lose sight for one’s entire life. And so, all at once everything was finished, everything came to an abrupt end. He could never again be a military leader, use his sword, lead his army into battle. Without sight not only was he unable to rule his country, but he could not even take care of himself: he had to be led around and fed. By now the forthcoming marriage had no meaning. Vladimir .suddenly became completely alone. This loneliness was terrible for him. And only the Greek missionaries did not forget him. On the contrary, they surrounded him now and revealed to him the depths of Christianity, life of the spirit, life of the heart. And with blind eyes he now saw a completely new life, hitherto unknown to him.

And suddenly, as with this blindness, so will come death. Everything will pass away, will die, and his spirit alone will remain, which has grown attached to this earthly existence, to worldly interests; and it will suffer and languish in this new unearthly, already eternal life.

His state advisors were silent, his sword lay useless and rusted, and the spirit within him was in turmoil, in the pangs of birth upon entering a new life — an eternal, spiritual life. So he approached baptism as a humble, helpless man, who had only one hope, one new eternal goal—communion with God. And here, in the baptismal font a miracle happened: he recovered his sight. He saw again the light of God, this wonderful world, the Dnieper River, fields, forests. Everything was as before. But by now he was a different person; he had already experienced a new life. As a blind man he saw a different light: “Glad light of the holy glory of the immortal, heavenly, holy and blessed Father, Jesus Christ” (Beginning of the vesper song to the Son of God). He entered the font as a pagan: proud, lustful, egotistical, pleasure-loving; and he came out as a humble slave of Jesus Christ, as Vladimir the Saint.

At his call the people of Kiev gathered on the shores of the Dnieper to be baptized. Vladimir began to speak: he called his nation to holiness, to godliness. He urged them all to break off at last from paganism, from the pagan way of life, and to start a new way of life, a Christian way, where everything pertaining to God would be kept in honor—an Orthodox way of life. He said that real life was only in Christ, and this temporary life was just a means, a preparation for true, eternal life.

From this moment Russia became holy and began to bear fruits of holiness. One after another, Russian saints began appearing, until they filled up this entire heaven of the Saints who shone in Russia, who as bright stars shine before us now and call us to themselves. Here is Prince Boris, who was killed while Matins was being performed in his cell; and Prince Gleb, who also was killed during prayer; and Prince Isyaslav, who before dawn went in his carriage to Lavra to get advice and blessing on his state matters from the startsi of Pechersk” (Startsi; starets (sing.) — monks distinguished by their great piety, long experience of spiritual life, and gift for guiding other souls. Pechersk—monastery located in caves on the shore of the Dnieper River on the outskirts of Kiev). And only then, after standing through the early Liturgy, would he go to his state meeting and make decisions. So Holy Russia grew and became stronger.

Times have now changed, but the Church is unchangeable and immutable. And in our time, even in a foreign land, we can still draw from her the same Orthodox way of life. Yes, our life is strained, our jobs are intense, our tempo is mad. And maybe we cannot fulfill everything physically, as our forefathers did. But psychologically we can and we should participate in the flow of Church life. Look attentively around: even some non-Orthodox are coming and accepting our faith and its way of life. By this are they not reproaching our lukewarmness?

May this Sunday of the Saints who shone in Russia serve as the beginning of our new life, which will bring us to Eternal Life!

From The One Thing Needful, Sermons of Archbishop Andrei (Rymarenko).