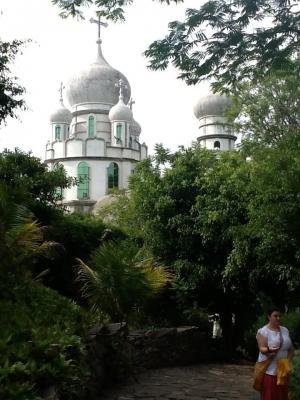 The monastery chuch.
In early June, a mission team from the seminary community, led by Chancellor/CEO Archpriest Chad Hatfield, visited Guatemala to lend much-needed hands to Hogar Rafael Ayau Orphanage. The team assisted in moving the orphanage from "Zone 1," a crime-ridden and dangerous area of Guatemala City, to Hogar San Miguel, a new orphanage in the mountains outside of Guatemala City.

"This was the first ever mission team organized from St. Vladimir's Seminary," noted Fr. Chad, “and this was my sixth time personally to be at the Hogar Rafael Ayau Orphanage and the Holy Trinity Monastery.

"This trip was supported by people all over North America and 'Team Guatemala' did an outstanding job of fundraising for their own expenses," Fr. Chad said. "Additionally, the funds included a very generous donation to support the work of the nuns at the orphanage, as they transition to their new facility, beginning in early February 2013.

"I have a personal goal to offer a missiology course on site there, at the new facility, in 2014," concluded Fr. Chad. 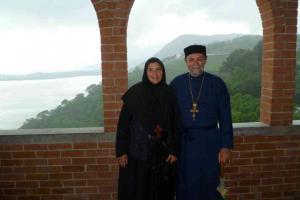 Father Chad Hatfield and Mother Ines of the Hogar, stand in front of the new orphanage’s beautiful backdrop.
Hogar Rafael Ayau was founded in 1857, as Guatemala's official national orphanage. In January 1996, a newly elected government began negotiations with the Catholic Apostolic Orthodox Antiochian Church in Guatemala to privatize and entrust the country's orphanage to the church, and plans for renovation and reopening began. In August 1996, the Hogar Rafael Ayau orphanage was received by the Orthodox Antiochian Church, and on October 13, 1997, after the basic reconstruction and renovation of the orphanage, Hogar Rafael Ayau reopened its doors and received 115 boys and girls who had been transferred from another dilapidated government institution. Mother Ines, Igoumeni of the Orthodox Monastery of the Holy Trinity–Lavra Mambre, was entrusted by His Eminence Archbishop Antonio (Chedraoui) to oversee the orphanage.

In its newly constructed quarters at Hogar San Miguel, the orphanage and women's monastic community hope to become self-sustaining. The new complex contains space for a school, workshops, refectory, kitchen, dormitory, medical clinic, covered play area, swimming pool, administration offices, and missionaries' quarters. San Miguel's is being organized to provide food for the community as well: farm-raised tilapia, rabbits, bees, orchards, coffee plants, and a vegetable garden will provide sustainance; while children will learn crafts and arts in special workshop areas, such as carpentry, iconography, incense making, sewing, baking, and so on. As part of their daily schedule, the children attend liturgical services daily, nourishing their souls as well as their bodies; the beautiful monastery church near the new orphanage will be their spiritual house.

Ian Jones: "It's both inspiring and humbling to see God's work carried out so faithfully and constantly by the nuns at the Hogar, and to have been able to contribute to their mission with such a great team from St Vladimir's."

Subdn. Scott Miller: "One afternoon, some missionaries (including Dn. Andre Paez and myself) chaperoned some of the older orphans on a trip to the mall just outside Guatemala City. It was an upscale mall with lots of stores with signs in English, so we mostly just walked around, looking at things none of us could afford. The orphans were hesitant to let us treat them, but by the time we left, they and the other missionaries were laughing it up and enjoying some freshly-made crépes. It was nice how something so simple could be so special to them and to us."

"On the way back to the Hogar, the driver routed us through an area that he said is the poorest part of Guatemala City, just a mile or two from the Hogar. It was a valley of shacks, a sprawling shanty town. We didn't see it in much detail, but it we saw enough. The lives the children have at the Hogar, with love, shelter, food, sanitation, education, and spiritual guidance—compared to those on the streets—was quite stark." 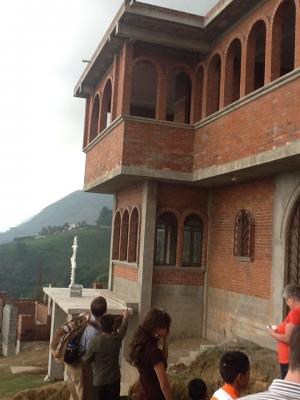 The new orphanage.
Claudia Bazil: "For years, I have wanted to go on a missionary trip. When the opportunity arose to go to the Hogar Rafael Ayau with Father Chad, I decided it was time to stop thinking about it and just do it. I didn't really know what to expect, but I knew that I wanted to help in whatever way I could. My experience in Guatemala City was so much more complex than I ever could have imagined; it was so evident that our presence there was so much more important to these children than just a monetary donation would have been."

"The orphanage is a wonderful and nurturing place filled with happy children, but they still have a need for extra love and care. In a mere week, these children had left an indelible mark on my heart, and I was sad to say goodbye to them. Happily, they will be visiting the seminary May 22, 2013 on a music tour (pending the securing of visas), so I look forward to seeing my new friends again."

Fr. David Wooten: "The Hogar is a beautiful oasis for these orphans, who are given spiritual, educational, and material nourishment, while all around in Guatemala City there exists crime, corruption, and danger. We were privileged to be a part of helping the mothers move to the next chapter of the Hogar's ministry, and I am grateful to have been able to go and serve there."

Mary Roth: "The experience to Guatemala was amazing. The children there are so beautiful spiritually. They taught me a lot about situations and things I take for granted, such as having food, not being wasteful, and completely trusting that God will help. I never once heard the children or the workers at the Hogar complain about having to do work or chores, or having to go to school. They knew what needed to get done and they did it, even though they have a more rigorous schedule than I do during the day."

"The children were cheerful, and ready to work and play when given the opportunity. The children also showed so much enthusiasm when they had time to play with those of us visiting. Most of us would feel sorry for ourselves if we had to live their lives; but if you were to meet them on the street, you would think that they came from a two-parent, loving home. I learned many things from those that work with them daily, and I believe God was able to use this experience to help me learn how to work on myself. I look forward to keeping in touch with not only the children but also the workers at the Hogar, in order to continue my own personal spiritual growth." 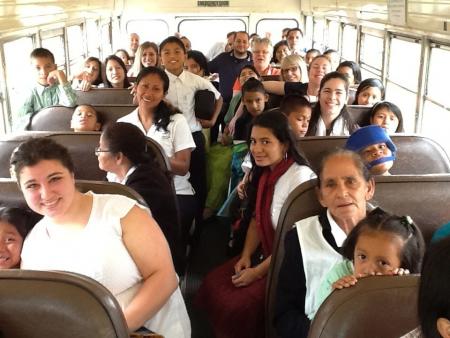 is it possible to add my email (renee@ocmc.org) to your email list?

is it possible to add my email (renee@ocmc.org) to your email list?