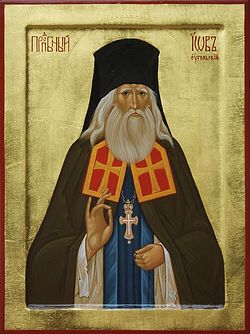 The young Ivan finished school in Iza and desired to become a monk but from 1924-1925 was obliged to served in the Czechoslovak army. Finishing his duties, Ivan walked all the way to Mount Athos in Greece twice in order to live there as a monk. Unfortunately, from September, 1926 the Greek government began severely restricting the number of non-Greek monks permitted to live on Mt. Athos so each time Ivan was forced to make his way home. At this same time, the Monastery of St. Nicholas opened in the village of Iza and here Ivan completed his seminary studies. In 1930 he and his elder brother, Hieromonk Panteleimon sold everything they owned and opened a skete dedicated to the Holy Trinity in nearby Gorodilovo. On December 22, 1938 St. Alexis Kabaluk tonsured Ivan a monk, giving him the name of Job.

With the Nazi occupation of Carpatho-Russia in 1939 Fr. Job and many others fled to Soviet Russia, unaware of the persecution the Communists were unleashing on the Orthodox Church.Fr. Job was arrested, sentenced to 25 years in prison but was released in 1942 to serve in the Soviet army fighting the Nazi invasion of Russia. As a Czechoslovak citizen he was forced to fight with the artillery of the Czechoslovak Volunteers Brigade. As a monk, he refused to fire shells and would secretly defuse them before they were fired off. During this period in his life Fr. Job met the renowned Archbishop Luke the Surgeon, later canonized as St. Luke of Simferopol and kept his portrait in his cell for the rest of his life.

With the ending of the war in 1945, Fr. Job made his way back to his monastery in Gorodilovo and was ordained a priest-monk on November 16, 1945. Within a year he was appointed rector and abbot and spiritual father of the monastery in Mukachevo.

In 1956 a new “bishop” was appointed by the Soviet authorities who immediately began closing monasteries throughout Carpatho-Russia. Father Job was removed from his position and the monastery in Gorodilovo was closed, beginning a period of wandering from one monastery to another. Hoping to rid themselves of this holy man, the Soviet authorities had Father Job appointed priest in 1962 in the remote village church of Malaya Ugolka, formerly known as Monastyrets.

Here as a parish priest, Father Job for 23 years served the Divine Liturgy and the daily cycle of services from which he received the gift of the Holy Spirit. He became known as a starets or an elder. People flocked to him from throughout the region both peasants and the educated to seek his advice. He was known as a clairvoyant, worked miracles and predicted the future. He became such a source of grace because of the years he had spent in warfare against his sinful passions and struggling to join himself to the Lord through prayer and fasting. St. Gregory the Theologian in his writing In Defense of His Flight to Pontus wrote

It is necessary first to be purified, then to purify; to be made wise, then to make wise;
to become light, then to enlighten; to approach God, then to bring others to him;
to be sanctified, then to sanctify… 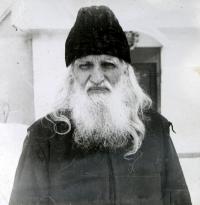 Archimandrite Job (Kundria)
The life of St. Job is a sermon to each priest on the means by which we can most effectively serve the Lord and His people. Our ministry as priests becomes a source of spiritual healing for people only as we are in the process of being healed of our sinful passions. Our ministry as priests only becomes a channel of grace when we devote ourselves to daily prayer. This is true in the lives of all the holy men and women throughout history: they only impacted the lives of people in powerful ways and bore the gifts of the Holy Spirit in the proportion to which their lives were spent in prayer, fasting, and fighting against their sins.

On Sunday, July 28, 1985, at the age of 82 St. Job peacefully fell-asleep in the Lord after serving the Divine Liturgy, preaching a sermon and serving the evening Vespers. Soon after his burial miracles of healing began to take place at his grave in the village cemetery. On October 22, 2007 as local clergy and the diocesan Bishop Hippolytus uncovered the relics of Father Job the fragrance of myrrh and incense filled the air. The Divine Liturgy at which his name was added to the calendar of saints was celebrated in the open air in front of St. Job’s village church in Malaya Ugolka. St. Job’s life was read out and his troparion and kondakion were sung as all venerated his holy relics and icon for the first time.