A Wreath to St. Sergius of Radonezh

On this feast day of St. Sergius of Radonezh, we present an essay by Fr. Sergius Bulgakov, given during one of the most difficult times for Russian people both inside and outside of Russia. 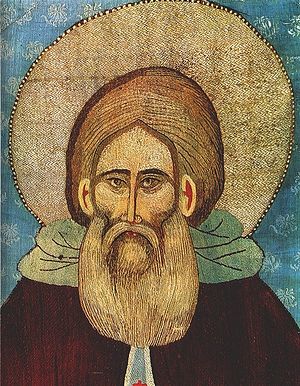 St. Sergius of Radonezh, embroiderd icon (fragment). 15th c. Five and a half centuries have passed since the blessed repose of St. Sergius. The changes that have occurred in everything are great, and great is the historical distance that separates us. However, he still remains not only our spiritual leader and heavenly intercessor but also a friend who measured the depths of our sorrow and through it became our kin. For he lived at a time in a way no less crucial than ours. Today the Russian Land is captured by the enemies of the faith of Christ, but was not she then too groaning under the Tatar yoke, forced to reno­unce the faith and worship fire and pagan idols of the Horde?

Spiritual wounds alienate us from each other in foreign lands, we are degenerating in fratricide, but what was Rus of his days like, under the burden of captivity and torn by discord? We have gone through and are suffering now the disasters of war in our Homeland and outside it with all their violence, but did he not witness wars and was he not the spiritual leader of the fight for the liberation of the Motherland, the spiritual ally, so to say, of the Kulikovo Battle? Today, broken down by division, we strive to gather under his banner to preserve our spiritual entity, but was not the saint gathering a small flock around himself, in the monastery which was destined to become the core of Russian rebirth? Now we live in ignorance of the day to come, a dark curtain hiding it from our view, but did not his cloister live in need and privations being not once on the brink of complete poverty? We are broken down sometimes by mutual detraction and discord, but was not he forced to leave his own monastery detracted by the brethren? We are dragging out a sorrowful existence of exiles, but was it not his lot at one time when he fled from the Tatar invasion? We believe our grievances to be unprecedented but it is the distance that prevents us from seeing clearly, for if we examine closely the details of the saint's life we will see how great was the measure of suffering overflowing his heart.

And though there were no outer weapons of annihilation at the time, the passions were as annihilating, and the Kulikovo Battle was as fierce as the fights we are witnessing. Later times are marked by greater maturity in good and evil, the past seems childish and naive today. Every historical epoch has its own scale, and in the time of St. Sergius, heights were scaled also. On his path of trial, the saint gained the wreath of truth and became a leader and healer of Russia. His spiritual power found expression in the life of the Church and the state, in the sphere of creative activity of the people.

What is the essence of the saint's feat? In what exactly and how can we imitate him now, when conditions of life have changed so radically?

Outwardly he was bound with the peculiar circumstances of his time, but inwardly he retains the major significance he had in his lifetime, for a human spirit turned to God is not dependent on the time in which it performs its deeds, and we have to follow the spiritual path of the saint and be inspired by his inspiration. We will not find majestic gifts in his humble image, gifts to be honored with human grandeur. He edifies us with Evangelic majesty, of which it is said: whosoever will be great among you, let him be your minister; and whosoever will be chief among you, let him be your servant (Mt. 20. 26-27); Take my yoke upon you, and learn of me; for I am meek and lowly in heart (Mt. 11. 29). Such majesty is not a natural gift: it is attained through the feat of faith and prayer, the fulfillment of the Lord's commandments of the love of God and one's neighbor.

The Life of the saint tells of miracles and signs and of revelations, of ministering with the angels, of the appearance of the Most Pure One, of Communion from the Cup of Divine Fire. But the greatest and most striking of miracles is his own feat of boundless self-denial and humility in shouldering the burden of his brethren, his ceaseless self-abnegation.

So we ask ourselves: can we aspire to imitate him, to measure ourselves with the same scale? Will we be edified by the majesty inaccessible to us and frightening? However, the path of Christian living is common for all, and observing one following it we should strive also to enter upon it, according to the Apostle Paul: Brethren, I count not myself to have apprehended: but this one thing I do, forgetting those things which are behind, and reaching forth unto those things which are before, I press toward the mark for the prize of the high calling of God in Christ Jesus (Phil. 3. 13-14).

And further he adds: Be followers together of me, and mark them which walk so as ye have us for an ensample (5:17). The saint too, byoffering an example, calls us to be followers of him. And it is in the midst of despair and hopelessness of our life that we must perform the ascetic labor of prayer and faith. We remember better times preceding today's trouble, but how are we to overcome disaster, to conquer our despondency? We know and preach that human destinies are built through Divine Providence, and that they are the work ofthe Lord. We have to transformthe abstract knowledge intoliving reality,to actually see the hand of God. It is this feat of faith that the saint teaches us, for his life is an unbroken chain of the victories of faith over numerous challenges. What would have happened to our Motherland if Dimitry Donskoi had not found in him the encouragement he needed for his military feat, or if the saint himself had not stood out against the inner and outer shocks in the life of his monastery, which was destined to become a real nursery of the Russian spirit? Is it not the same trial of faith that has now fallen to the lot of his children at home and in exile, humiliated and distressed, driven along like chips from one bank to the other, deprived of home and shelter, in the face of the horror of the unfathomable destinies of theirs and those of the entire world? We must stand out spiritually, preserving in our hearts what has been given and entrusted to us. We are expected to make the last desperate effort of faith, but it is faith that promises us thehelp of the Lord. And the image of the saint shines before us on this way of the cross our faith has to traverse.

We live under the banner of the saint as his small flock. And our monastery has one and the same spiritual task: to preserve our trust in Divine Providence, to preserve faith and hope. Many a time the mercy of God has saved us miraculously but the paths of our future are not to be fathomed. While we are not deprived of this mercy, we are called upon to follow our path, live in our enclosure according to God; that is, in prayer—which is the wings of heaven—and in the knowledge of God and His mysteries imprinted in theology.

May not the thunder and roaring of heaven and hell drown this celestial voice, and may we not be bereaved of the silence of prayer and inspiration of God's wisdom. May we follow our path according to the Apostle: I have fought a good fight, I have finished my course, I have kept the faith (Tim. 4.7).

May St. Sergius bless our labours in the forthcoming acceptable year of the Lord.