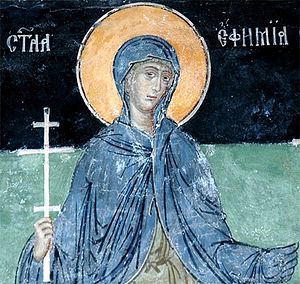 Great Martyr Euphemia.
When listening to Church hymnography that praises those God-pleasers the Church commemorates, we usually hear male names. But today we are celebrating the memory of two God-pleasers bearing feminine names.

The holy Great Martyr Euphemia and Holy Blessed Princess Olga have both been given praiseworthy names: St. Euphemia is called the “All-Praised”, and St. Olga was called even by her contemporaries, the “wisest among women”.

St. Euphemia was tortured during the persecutions against Christians under Diocletian, and her death and suffering are commemorated on September 16/29. But today her memory is celebrated because of a miracle that happened during the Fourth Ecumenical Council. This council was supposed to decide who is right—those who believe that Christ was both God and man, the God-Man, or those who asserted that the divinity in Christ completely swallowed up His humanity, so that even His sufferings were only apparent.

When the representatives of the Orthodox, headed by Sts. Anatolius of Constantinople and Juvenal of Jerusalem, proved through many citations from the Holy Scripture and Tradition that Christ is the God-Man, they wished to receive yet a more powerful indication from God as to which belief is correct, and so they wrote down the two creeds—the Orthodox and the Monophysite. These writings were both placed in the reliquary containing the relics of St. Euphemia, which was in the church where the Fourth Ecumenical Council took place. The reliquary was sealed and the church locked shut, so that no one could get in, and when after three days the church was opened and the reliquary unsealed, the Orthodox creed lay upon the chest of St. Euphemia, while the Monophysite creed lay at her feet, as if she were trampling it. After such a clear indication from God, the Monophysite faith was condemned. St. Euphemia then received the name, the “enclosure of the holy fathers”, and the “confirmation of the Orthodox Faith”.

Several hundred years passed after this miracle. The Russian Grand Princess Olga accepted Christianity, receiving at her baptism the name Olga. She desired to baptize all of Russia, and many followed her example, but she was unable to completely realize her wish; even her son, the harsh Sviatoslav, remained a pagan. But finally her grandson, Vladimir, decided to change his faith. When he began to incline towards Orthodoxy, he called his boyars and military leaders together for a council. After many conclusions drawn in favor of Orthodoxy from their travels to Constantinople, the boyars said, “If the faith were not good, the wisest among women Olga would not have received it.” This argument was so convincing that any remaining questions about which faith to receive were put to rest. What Olga could not achieve during her lifetime, she accomplished after her death. Memorial of her as a saint began to spread throughout Russia on the day of her death, July 11, along with Euphemia, whose relics had been brought to Constantinople from Chalcedon. 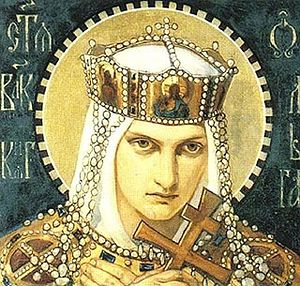 St. Olga.
Centuries passed. People of another religion took Constantinople, and Moscow became the capital of Orthodoxy. As if a sign of this, by God’s will, during the reign of Tsar Mikhail Feodorovich—who was, incidentally, born on this day—the seamless robe of Christ was brought to Moscow. Once the Second Rome, Constantinople, had the robe and cincture of the Mother of God as its protection. We know that the first Russian princes to accept Christianity, Askold and Dir, were baptized after experiencing a miracle during their campaign against Constaninople: When the Patriarch lowered the robe of the Mother of God into the sea, a terrible storm arose which destroyed the Russian ships. The Russian military leaders and soldiers asked for baptism, so amazed were they at this miracle. Now, not the robe of the Mother of God, but the seamless robe of the Lord Jesus Christ Himself was being brought to Moscow.

The Third Rome presided over all the Orthodox peoples, it began to free the Orthodox East from the Moslems, and it seemed that the complete end of their reign was nigh. But at the decisive moment, Russia herself fell under the terrible slavery of Communism. If in the Second Rome (Constantinople) no one dares to have cross procession or in any way openly express signs of veneration of the Orthodox Faith, they can at least praise and pray to God unhindered in their churches—even reciting the text about “right-believing kings” (from the troparion to the Cross), since the Greeks have not changed the words of the prayer containing this plea.

Today in the center of the Patriarchal Church in Constantinople is the reliquary with the relics of St. Euphemia, bearing the Slavonic inscription that this reliquary is a gift from Metropolitan Antony of Petersburg. This inscription as if bears witness that the Russian people invisibly stand in prayer before St. Euphemia. In the place where St. Olga’s relics rest, churches are being confiscated and turned into cinemas, museums and theatres, while in the remaining churches the regime is supporting the invasion of renovationists and false clergy. The godless authorities want to enslave the souls and bodies, controlling even what goes on in the churches. But the miracles wrought after the deaths of Sts. Euphemia and Olga give us hope that they intercede for the Orthodox even now.

Let us end our prayer today with the plea that we find in the kontakion to St. Euphemia: “Now also crush under the feet of right-believing kings all heresies and error of our enemies.”