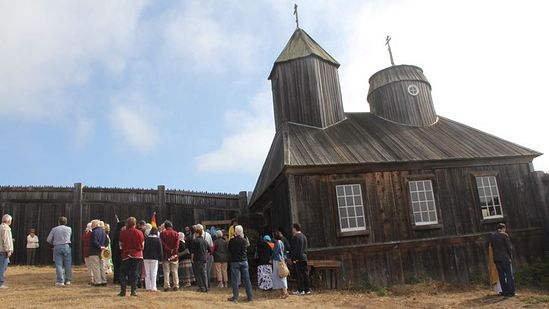 The Holy Trinity Chapel at Fort Ross.
Traditionally there is a big celebration called the Day of "Living History", which takes place on the last Saturday of July each year in the first Russian settlement in California—Fort Ross.

This year's feast day began with the Divine Liturgy Service at the Holy Trinity Chapel in Fort Ross. Concelebrating were Administrator of the Patriarchal Parishes in the United States, Archbishop Justinian of Naro-Fominsk and the head of the Bashkortostan pilgrims group - Bishop Nicholas of Salavat and Kumertau. Worshipers from all over California came to pray at the Divine Liturgy on this holiday. The abbess of the Theotokos-Tabynsk women’s monastery of the Ufa Diocese Johanna (Smolkina) and the sisters came together with Bishop Nicholas. A moleben to St. Vladimir was sung after the Divine Liturgy. 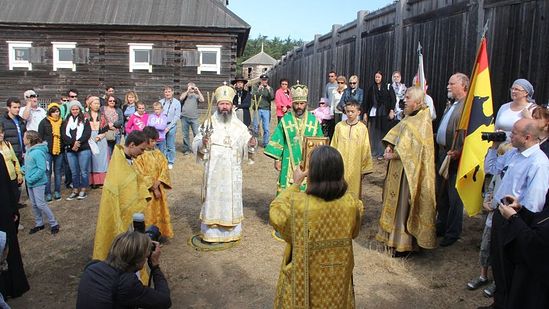 After the service Archbishop Justinian warmly welcomed his guest Bishop Nicholas and his companions as well as all the faithful who came to pray at this holy place. “Today we commemorate the Grand Duke Vladimir, the one who baptized our ancestors and lit the light of Christ’s Truth on the Russian land. But his legacy that indeed made him equal to the Apostles extends not only to Holy Russia. His descendants—Russian monks, the Russian people— were the first missionaries who sowed the seeds of Orthodoxy on the American continent. Thus, St. Vladimir unites the people of Russia and America. All of you are a living testimony to the fact that his work and the work of the missionaries in the United States were not in vain. Today the Name of God is glorified and the Orthodoxy is preached on this land”, said Vladika Justinian. To express the gratitude for the warm welcome and the joy of concelebrating together in Fort Ross Bishop Nicholas presented Vladika Justinian with the icon of the Kazan and Tabynsk Mother of God.

After this Archpastors consecrated new bells for Fort Ross. The bells are the gift from the citizens of Tot’ma, Vologda province—the place where the founder of the Russian settlement in America Ivan Kuskov was born. For the efforts in delivering the bells all the way from Russia to the United States Mark Galperin was honored with an award by Vladika Justinian.

In the ancient cemetery not far from the Trinity Chapel, Archbishop Justinian, concelebrating clergy and all the people in attendance remembered in prayer the founders, builders and all who worked and lived at Fort Ross.

Some high-ranking guests arrived to the feast—the ambassador of the Russian Federation to the United States Sergei Kislyak, Consul General to San Francisco Vladimir Vinokurov, the Special Presidential Envoy for International Cultural Cooperation Mikhail Shvydkoi and other officials, with whom Archbishop Justinian exchanged mutual congratulations after the service. 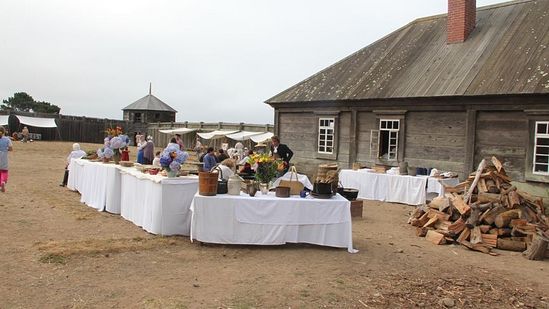 A festive common meal prepared by the parishioners of St. Nicholas Patriarchal Cathedral in San Francisco was served at the end of the celebration.

From the website of the Moscow Patriarchate in the U.S.

Manny8/7/2012 2:28 am
The Russian at Fort Ross donated bells to the Mission San Francisco Solano in 1823. What kind of bells where they and where can they be seen? Als, are there any pictures of the bells (bell)? Thank You.
×