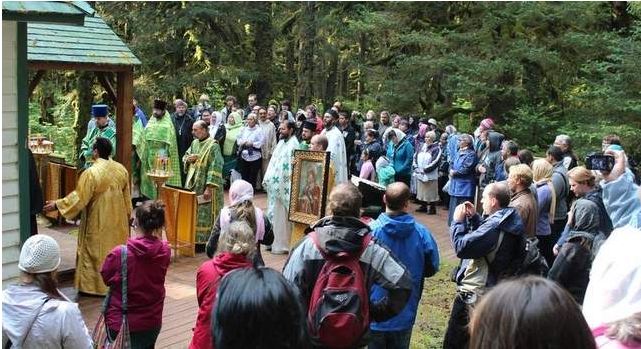 Pilgrims from across the world traveled here Wednesday to celebrate the 42nd anniversary of the canonization of St. Herman of Alaska.

The annual pilgrimage drew around 100 people who arrived by boat to visit the holy site where Orthodox Christianity celebrates its roots in America.

Bells rang as the Orthodox ministers arrived and made their way up the path to St. Herman’s Chapel, followed by the crowd of pilgrims.

St. Herman was part of the Russian mission that came to Kodiak in 1794. He helped convert the native population to Christianity, but eventually came into conflict with the Russians about their treatment of the native people. As a sort of exile, he moved to Spruce Island where he lived a monastic life in the early 1800s.

“St. Herman who lived here on Spruce Island is a Saint who is known throughout the Orthodox world,” Archbishop Benjamin Peterson of San Francisco and the West, and acting Diocese of Alaska, told the Kodiak Daily Mirror. “I think a lot of people feel connected to him because he’s closer to our time. He’s not really a remote figure.”

St. Herman was canonized in 1970 and is buried in Kodiak. He was the first Orthodox saint in North America.

The divine liturgy lasted about two hours and included prayer, Scripture readings, a sermon and Communion. Twelve members of the St. Seraphim of Sarov Orthodox Church in Kalskag led the choir services. It was the group’s first time on the pilgrimage.

After the divine liturgy, some pilgrims paid tribute to St. Herman by visiting his original grave site located underneath the chapel.

Pilgrims also visited the St. Herman’s spring to drink fresh holy water, and the homes and grave sites of Father Peter Kreta and Rev. Archimandrite Gerasim Schmaltz, the men who came after St. Herman and carried on his legacy.

Bishop Nikolai of Salavat and Kumertau, head of Bashkiryan Metropolia in Ufa, Russia, traveled from Russia with eight other pilgrims.

“This holiday is very important, not only for Alaska or for Kodiak, but for Christians from all over the world,” he said. “You can see that today. It’s amazing because it’s a very small place.”

People in attendance were from Russia, the Czech Republic, Slovakia, Mexico, Pennsylvania, Missouri, California, Alaska and other places in the U.S.

Metropolitan Christopher, Archbishop of Prague and the head of the Orthodox Christian Church in the Czech Republic and Slovakia was supposed to be in attendance, but had to return home due to a death in the church.

After the divine liturgy, the pilgrims had a picnic on the beach before heading back to Kodiak.

The Miraculous Intercession of St. Herman of Alaska
Matushka Galina Tregubov and Lee Browne-Beed
When they finally started their exciting, but extremely difficult, ascent, everything went just fine for a few days. But at the end of one day, on a narrow path, they met an old, strange-looking man in a long dark robe. He was walking in the opposite direction, down the mountain. In a friendly manner he greeted them and advised them to turn around and return to the base camp as quickly as possible because the weather was changing into a severe storm.

40TH Anniversary of St. Herman's canonization to be celebrated during annual Spruce Island Pilgrimage August 9
Hundreds of Orthodox Christian pilgrims are expected to flock to Spruce Island, AK on Monday, August 9, 2010, to celebrate the 40th anniversary of the canonization of Saint Herman of Alaska, one of the first -- and surely the most beloved -- Orthodox Christian missionaries to serve the people of Alaska.
Comments
×