Sermon on the Feast of the Transfiguration 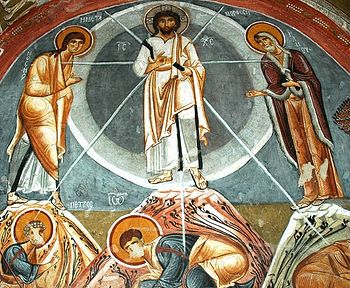 When He created the world, God said, Let us make man in our image, after our likeness(Gen. 1:26). God’s image manifests in man’s mental capabilities, in his authority over nature, his power, and his ability to create. God’s likeness in man consists in his moral perfection, his spiritual strivings, and in his possibility of attaining sanctity.

God’s image and likeness, in which our fore-parents were created, was fully reflected in them before the fall. Sin disrupted both the former and the latter, although it did not entirely deprive man of them.

Man retained his mind and the other qualities that gave him God’s image, but he needs to apply greater effort to develop them, yet he achieves only a small measure of what his fore-parents had received in full. The yearning to be the likeness of God has remained in man to a certain degree, although it sometimes wanes beyond all recognition.

In order to return to man his original closeness to God, the Son of God descended to earth and became incarnate. He put on human nature and became like man in every aspect except for that of sin. He came to recreate our first created beauty in the image of God. But if in the beginning God created man in His image and likeness, then in order to recreate the first image, man’s own participation is also needed. Man must strive for perfection in order to attain it through the grace and help of God. The Lord showed the way to perfection through His teachings and by His own example. This is the path of moral perfection, self denial, and readiness to free oneself of everything sinful. Sin entered deeply into human nature, mingling with it, as it were. Every person is born with the seed of sin, and the struggle to be free of it is a struggle with his own self. That is why this struggle is so agonizing; but it is necessary in order to come closer to God. If any man will come after me, let him deny himself, and take up his cross, and follow me (Mt. 16:24). The cross that we must take up is that very struggle with our own weaknesses, vices, and sin. Gradually freeing ourselves from them, man comes closer to God, in Whose image he was created. Man himself does not have sufficient strength to accomplish this, but he is aided by God’s grace, which He gave through the Church created by His incarnate Son. For this He became incarnate—to raise once again His fallen image.

On Mt. Tabor Christ manifested the beauty and glory of His Divinity, so that the apostles might know of it and through them the whole world, the likeness of Whom is man, and to show what man can attain when he spiritually upraises himself. To the degree that man purifies himself of sin and comes closer to God, the glory of God is ever more clearly reflected in him. That is why saints are called in Russian prepodobny, meaning “like unto”. The glory of God is reflected in their souls as in a mirror, filling them with its radiance. When his earthly struggles are over, the degree of likeness that he has achieved is finally and permanently sealed. When the eternal Kingdom comes and all people are resurrected, their souls are united with their bodies, and Then shall the righteous shine forth as the sun in the kingdom of their Father (Mt. 12:43), as Christ Himself said.