Seeker of the Truth. In Memory of Hieromonk Seraphim (Rose)

“Christ’s call is still reaching to us; let us begin to listen to it.” These words of Father Serpahim (Rose)—ascetic, theologian, and preacher—are relevant today more than ever. His books helped many to hear this call. Written in the 1970s and ‘80s for his contemporaries lost in the intellectual wastelands, his works are today even more relevant, because today’s “intellectuals” are wandering lost in even more dangerous deserts of spiritual morbidity. 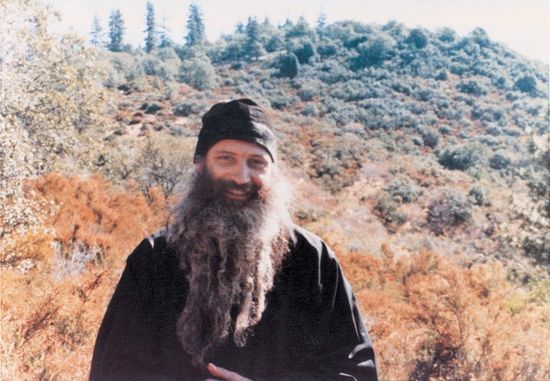 Fr. Seraphim in the St. Elias Skete, Noble Ridge, near the St. Herman of Alaska Monastery in Platina, Cal. In the background is Mt. St. Herman. Father Seraphim departed to the Lord on September 2, 1982—30 years ago. In honor of this day, Pravoslavie.ru has asked several pastors of the Russian Orthodox Church to talk about what Father Seraphim means to them. 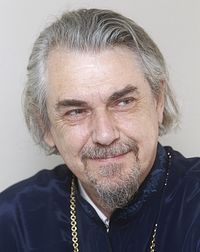 Books by Father Seraphim (Rose) played a very important role during the period of my life when I was coming into the Church. When I read during the early 1980s in samizdat Orthodoxy and the Religion of the Future and Signs of the End Times, I was stunned by his ability to connect and place into Christian context the scattered and multi-faceted phenomena of modern times. He taught me that that the history of mankind, indeed the very life of every person is filled with meaning. Father Seraphim has remained a unique example of a missionary in whom were combined a powerful mind and asceticism, and the ability to speak with fervent faith to his readers in their own language. His path to Orthodoxy was thorny, but through his personal experience and choice by both the mind and the heart, he brought and will continue to bring a multitude of people to the Church. 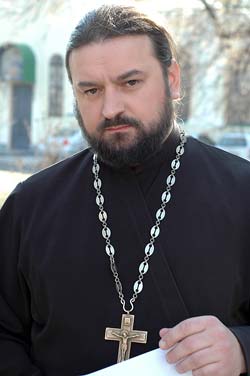 This man’s name and information about him entered into my life during the time when the song, “Good-bye America, o-o-o” was a fresh hit. Secretly raised on a love for a country of “forbidden fruits” and its culture, many of us truly viewed America as a country “where I will never be” and where “you can find everything”, but you won’t find Orthodoxy, and probably never will. In our country during that period, whole generations were discovering the Orthodox faith like a kind of “Atlantis”, and we were greatly surprised to learn that a similar discovery was taking place in other countries by people of other cultures, including in the States.

Father Seraphim is very close to me as a person who sought Truth without compromise. He was prepared to undertake any physical or intellectual labor, just to achieve that goal. This is always a rare quality. But during these times of spiritual slackness, when even the strongest souls often look like twice-boiled cabbage, it is especially rare. “If the Chinese possess the truth, then I will learn their language and read their books,” said Eugene Rose. “If the Hindus have the truth, I will learn Sanskrit and drink from their sources”. That is what he did, passing the experience of peoples and nations through himself, studying whatever was the main thing these peoples have given to mankind.

Such behavior is, I will repeat it, rare in our days. Not everyone has a thirst for the truth, and it would follow that not everyone seeks the Source of Life. People think that since they were born in, say, Russia, then they will be elemental Christians all their lives by birthright, just as if they were born in a bread shop and will therefore happily be a bread roll all their lives. Various faiths have become intertwined with ethnicity and have turned into a kind of national and cultural appendage. Such manifestations are just as dangerous for the Christian faith as erosive skepticism. The true search for Truth is preceded by an existential anxiety, a feeling of being torn away from the sources of existence. And the more outwardly successful a person appears, the stronger this feeling is.

If Eugene had been hungry, all his energy would have gone into the search for food for himself and his family. Had he been deprived of the opportunity to study, to rest, have a good time and enjoy life, all the passion of his soul might have gone into social pathos, the fight for justice, equality, etc. But he was not hungry, he was successful, young, handsome, and not excluded from modern comforts of life. So, instead of burning out his life and going from one pleasure to another he began to seek the Living God. I found all this very amazing some time long ago, and it still amazes me whenever I think about it. 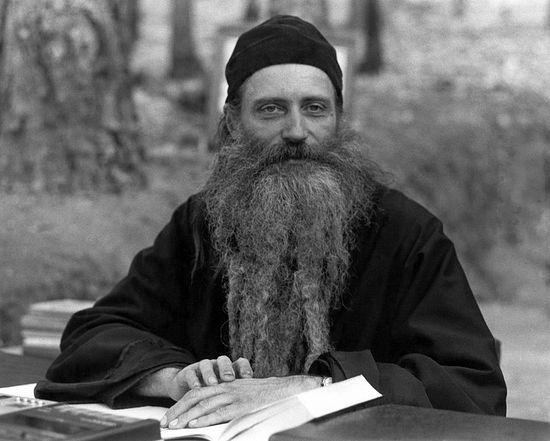 Fr. Seraphim Rose giving a lecture at the New Valaam Academy, Platina, 1980. Eugene accepted Orthodoxy in an unassuming church and had the feeling of coming home. This is also a very important moment granted to many people. Entrance into the Promised Land should be emphasized by its contrast with the lifeless desert that one leaves behind. The Father’s embrace is especially warm after the prodigal son’s life among the swine, far from home. Contrast is needed, which says to the heart: “Well, here it is, finally.” This contrast is needed not only for those who were born and raised in a non-Orthodox country. It is needed for all those who seek God and find Him after long effort, though he be not far from any one of us (Acts 17:27).

“The doors of the church literally closed behind my back,” recalls Fr. Seraphim. For those who seek God alone and His grace, similar things happen without the participation of any strong mediators; that is, without any powerful sermons, grand architecture, or soul-stirring music. Everything around might be very humble and everyday, but the seeker experiences a memorable meeting with the One Who is likewise seeking the seeker. This is the moment of conversion.

Orthodoxy should become a world religion that counteracts the ethnic limitations we are used to. Orthodoxy is by nature supra-nationalistic and universal. It is fitting for it to become this. If only we ourselves would enter in, and not prevent those Americans, Brazilians, Thais, Congolese, etc. who want to enter into communion with God, they willenter the Church, every day. They will bring their historical and mental characteristics, make us take another look at what we have grown accustomed to, from the vantage point of eternity. The first among them will be people like Father Seraphim Rose—that is, the intellectually gifted and insatiable in their desire to know God, the energetic and uncompromising, who want to worship the Father in spirit and in truth. The Father seeketh such to worship him (Jn. 4:23). And there is no nation that is absolutely incapable of bearing this fruit.

Thus through the name of Father Seraphim Rose did we learn that the American nation does not consist only of people chewing gum and insensibly watching television (you see, it was easier for us to think that way), but also of those who seek the Truth and will not rest until they find it. This alone compels us to remember Father Seraphim in our prayers. 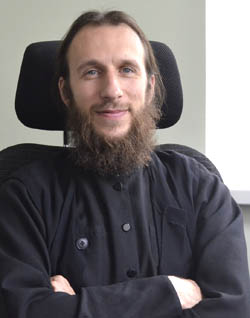 In the early 1990s Father Seraphim Rose played a large role in my Christian formation. We read his books The Soul After Death, Orthodoxy and the Religion of the Future, God’s Revelation to the Human Heart and others, but we were especially impressed by his biography, Not of This World, written by Hieromonk Damascene. (Several years ago, a much re-worked edition of this book was published by us in Sretensky Monastery.) An American born, intellectual and rebel, a spiritual diver, first of all amidst the depths of Eastern practices, a charismatic personality—he reminds us very much of Steven Jobs. But Eugene Rose sought the truth and not the exotic; he had no use for glory and success, he was truly not of this world. And his conversion to Orthodoxy, especially to Russian Orthodoxy, made a very strong impression on us young Russians who were only recently discovering the faith of our fathers.

In 1993 I had the good fortune to become acquainted with Orthodox Americans who continued Father Seraphim’s work. I even worked with them at the Valaam Society of America. They were then situated on Pogodinsaya Street, under the hospitable protection of Metropolitan Pitirim, and I was often with them. There you could find Father Seraphim’s books in the original language, watch how the Russian versions were being published, and come into contact with the mission that those American monks had begun in the wild forests using antediluvian printing presses. 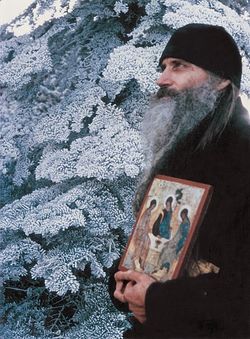 Hieromonk Seraphim Rose. In those days I was able to edit the translation of Father Seraphim’s book on Blessed Augustine—in the Russian it is called, A Taste of True Orthodoxy. (This was probably one of my first editorial experiences.) I was glad beyond words to read Father Seraphim’s inspired defense of Blessed Augustine, who was one of my favorite authors, from the attacks of Orthodox people who had “zeal not according to knowledge”. I still consider this small brochure to be very important for a correct understanding of patristic works as a whole, and Latin patristics in part.

And, of course, the ‘zine later published by his brotherhood called Death to the World made a huge impression on me. The idea was that Christianity, and especially monasticism, fulfills the yearning of “angry young people” towards non-conformism, rebellion against falsehood and hypocrisy. This is the very experience that inspired me and Vladimir Legoida when we discussed the future publication of an Orthodox periodical for young people. From these discussions were later born the periodicals, Foma and Tatiana’s Day. [Foma means “Thomas”, and the periodical is subtitled, “A journal for those who doubt”. Tatiana’s Day is named after the Martyr Tatiana, to whom is also dedicated a church in the Moscow State University.]

In a word, Father Seraphim Rose means very much to me, and I always commemorate him in the Divine services and ask his prayers.

We would like to include for English readers some of the readers’ commentary to this article, which further shows how Russian Orthodox Christians feel about Father Seraphim Rose.

“The example of Father Seraphim’s life and ascetic labors have helped and continue to help me during the most difficult moments of my life, and his book, The Soul After Death strengthens us when we see our close ones off to eternal life. I believe that the Lord has taken Father Seraphim into His Heavenly abodes. Father Seraphim, pray to God for us!” —Galina

“The amazing books of Father Seraphim Rose opened to me the beauty of Orthodoxy, and they are still my favorite books. I bow my head before his ascetic labors, his path, and his zeal.”—Natalia

“Father Seraphim, pray to God for us… His books were some of my first, and they formed in me an enduring immunity to all sorts of eastern garbage.”—Vasya

“Father Seraphim showed us how the heart opens up to God. What else do we need in life? Thank you!” —Alexander

nawal9/7/2013 9:29 am
Sounds father seraphim is very blessed father, i would love to read more about him.

B. Slinko9/3/2012 5:15 pm
Father Seraphim should be an inspiration to all Orthodox Christians especially those who by background were born into
Orthodoxy.He helps to explain so much about Orthodoxy that
is just accepted but not fully understood.
×