The Foolish Audacity of the Demons 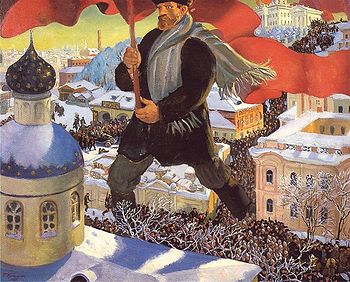 A wave of attacks against the Russian Orthodox Church of a force unknown since soviet times has arisen in our homeland, and it began in connection with events surrounding political elections—first of the State Duma, and then of the president. This connection is obvious, and it remains for us only to understand what exactly has happened, and what got the “liberal society” so riled up. Well here is what happened. Instead of taking the well-worn, liberal-democratic path of most of the world, Russia is slowly but surely returning to its own special path. We understand that this is not the easiest path, but it is the path that Russia has walked throughout its history, and to which it is now returning after nearly a century of wandering lost in the muddy ruts of Communism, and then of “wild” liberalism.

We can’t say that our path is ideal; there has been much that is bitter and hard, and many mistakes were made. But there is nothing in this world that is ideal. The main thing about this path is that it is a search not only for the earthly, but for the heavenly. This is a very serious and important point. And it must be allowed that we are capable of making a deep analysis of our mistakes in order to avoid repeating them in the future.

So, what, in fact, has the modern “worldwide” ideology risen up against with such wild desperation? It is apparent that a liberal-democratic system on the European and American pattern is not coming together in Russia, but another system that could be called “authoritarian democracy”. All seeming caricature aside, there is nothing more humorous in this classification than there is in a “liberal dictatorship”. We are talking about a strong, authoritarian government, supported by the majority, with an essential reliance upon traditional moral values, and on the Church. It is precisely against this cohesion (by the way, it is not a political union at all, as some see it to be, but rather a spiritual, cultural, and moral cohesion) that the entire liberal values system stands—against the Christian values system, and in our case, against Orthodoxy. They are most of all afraid of this force—a moral and spiritual force that is capable of forming a political, cultural, and moral vector of development in our homeland.

It was at none other than the Church that those miserable exhibitionists from the “Femen” collective began to hurl themselves like mosquitoes, and after them all the other victims of sociopathy, once they understood that the Church is not about to give in to the supposedly “grassroots” opposition, but to the contrary is ready to support to the “Putin regime” in whatever constructive things he does. Incidentally, this very phenomenon of hatred (often non-objective, inexplicable, and unjustified) for the party in power—even concerning objective demands—is no more than the “natural background” against which any ruling party in any country has to work, with all the inevitable imperfections. Well, what can we do? We do not live in paradise, and we have to deal with it somehow. Criticize the government? Yes, go ahead! Try to influence in some way? Yes, as much as you like! But we are not talking about such massive, unprovoked hatred, which was transferred to the Church when it became clear that the Church does not share that hatred. This is the very crux of the problem: Hatred goes before reason, before common sense, and that is—forgive me—an obvious sign of its demonic “inspiration”.

We have reached a critical moment in the ideological battle: the battle between secular ideology that debases man’s divine dignity, and the Christian ideology that confirms this dignity—and we can see by the battle methodology who is who. If the Church does not allow itself, come what may, to lash out or use any “administrative resources”, never mind the use of more repressive apparatuses (which they simply don’t have), then the opposing side is increasingly revealing its true colors. We might say, animal colors—not to offend anyone, but because behind these people’s behavior you can see a demonic hatred of God, of the system of Christian values, and of the whole idea of man’s salvation.

It is all as simple as two plus two. All the rest is only a question of methodology. The demons hunt, choose a victim, year after year cultivating their “agents of influence”, who to the very end might not even understand the demon’s aims, but who, under the pretext of fairness, lawfulness, human rights, freedom, and democracy, may in the final analysis be carrying out the program of those very demons. This program is: a war against God, against the Church, and against man. All the demons’ anger is directed against man and his likeness to God, which was fully manifest in our Lord Jesus Christ. That is why the churches are desecrated, why the crosses are being sawn off… Because only the Church preserves a full understanding of what man really should be, to what he is called, and what the highest meaning of his life is. Only the Church opens to us the original beauty of man, and helps man to find the way to attain this beauty. This idea is slowly but surely beginning to influence the secular authorities, to form an understanding of true ideals and strivings in all kinds of different people, including people who are in “big politics”, and to influence their decisions. This cannot but anger the demons who have already in many ways turned politics into their own sphere of influence and the conduit of their demonic ideas. But now suddenly it’s not working for them, now they are meeting with unwarranted obstacles and conscious resistance—perhaps not yet entirely obvious, but apparent nevertheless. So, in order not to allow the Church’s moral and spiritual influence to prevail in life (including political life) this long unheard of but very familiar wave of hatred is swelling up once more.

But this is no more than the “impotent rage of demons”; and the Church, of course, will in no way try to reason with or explain itself to the demons as much as it will simply continue its quiet, difficult, but extremely important work—the work of morally and spiritually transforming society. This work will undoubtedly bring forth fruits in all areas of life—in politics, culture, economics, and art. This is driving the demons crazy, and provokes their outbursts of impotent rage…

But God will not be mocked! And the sooner each one of us understands this, the greater chances we have of making a choice about which our children will not have to weep bitterly and repent.