“Christ is in Our Midst” 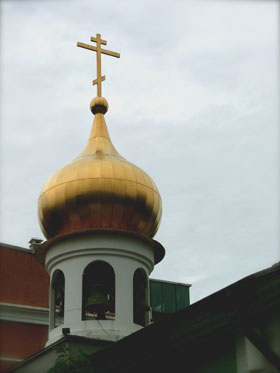 Beijing is not exactly a city of church bells and rising spires, but nestled quietly among the trees within the protective walls of the Russian Embassy lies the Russian Orthodox Church of the Dormition of Most Holy Theotokos. Its humble but majestic onion dome and Greek cross rise above the embassy walls, a sight few could have imagined only 50 years ago, when the Orthodox church was converted by the Soviet authorities into a garage. Three years ago the “garage” was restored into what it was originally made for, a temple of God where the Divine Liturgy is offered in all the rich beauty of the Russian Orthodox tradition.

About a month ago I contacted the priest rector of the church, Father Sergiy Voronin, and the first words of his response were, “Christ is in our midst.” The presence of Christ becomes obvious as one enters the beautiful Church of the Dormition, with its remarkable iconostasis; 30 minutes before Liturgy the icons are already illuminated as the faithful light candles and offer them prayerfully while intoning the name of Holy Trinity.

Why was I, a Roman Catholic, visiting this Orthodox church located in the Russian embassy?

Other than our shared brotherhood as Christians in the Apostolic Church, I came as a pilgrim to visit the site where 222 Orthodox Christians were massacred by Boxers in 1900, just as Catholic priests and faithful were being killed in other parts of the city. During the Divine Liturgy, my wife and I stood near the icon dedicated to the Orthodox martyr saints of China, and I could not help but contemplate Tertullian’s declaration, “The blood of the martyrs is the seed of the Church.”

I have visited other locations where Chinese Christians were massacred during the Boxer Uprising, and like those places, I could see how their blood planted seeds—though the seeds of Orthodoxy in Beijing have only recently begun to grow again into a more visible community. The problem today is that China does not recognize Orthodoxy as an official religion, and so only foreign-passport holders are granted access to Orthodox Liturgy. Chinese Orthodox Christians today can only walk by what were once grand Orthodox churches, such as those in Harbin, Shanghai, and Wuhan, and see structures that are now either boarded up or converted into artists’ studios, dance clubs, or exhibition halls.

After celebration of the Divine Liturgy, accompanied by harmonious voices of the church cantors, I shared tea with Father Sergiy and discussed the history of the Russian mission in China. The church also maintains a rich collection of old photos, documents, historical objects, and a library, in a small museum upstairs. There I was able to piece together more of the lush historical tapestry of the Russian Orthodox presence in China.

Catholic missionaries entered China en masse in the wake of the Reformation, and the most famous Catholic to live in Beijing was the intellectual luminary Father Matteo Ricci, SJ. But by the late 17th century, Russian Cossacks who had been defeated by the Qing armies under the commanding Kangxi Emperor were captured and brought to Beijing as evidence of the Chinese victory. Among these prisoners of war was the priest, Father Maxim, who had with him the required vessels for the Divine Liturgy and an icon of St. Nicholas the Wonderworker, after whom the first Orthodox chapel was named in China’s capital. Kangxi granted a plot of land near Beijing’s East Gate (Dongzhimen) to these Russian Cossacks and allowed them to openly practice their Orthodox faith; this is where the Russian diplomatic and spiritual mission in China has remained until today.

Few today realize that the Roman Catholic Jesuits were not the only Christian missionaries who exchanged scientific knowledge of astronomy, medicine, mathematics, and geography with China; the Russian mission also had such interactions with Chinese men of learning in Beijing. As more Chinese converted to Orthodoxy, there was a need to translate Church Slavonic into Chinese, a process which began after 1830.

In 1900, as anti-Christianity and anti-foreignism swept through northern China, Boxers attacked the Russian Orthodox mission in Beijing, called Beiguan, or“North Church,” and massacred 222 Chinese. In June 1900, the Boxers besieged the Orthodox mission and, after looting the church, burned it to the ground. The native Chinese Christians hid themselves at the home of Father Mitrophan Ji, a Chinese priest, but soon after his home was surrounded by a crowd of Boxers. The Christians were massacred; Father Mitrophan was stabbed to death under a date tree near his home. Not only did Boxers destroy the church, but every tree and bush was also burned along with the buildings.

Other Orthodox Christians suffered martyrdom during the Boxer violence. One of the martyrs was a seven-year-old boy whose Christian name was John. On the evening that Father Mitrophan was killed—June 10, 1900—young John was seized by Boxers, and because he was identified as a Christian, his back was slashed and his toes were cut off. While his captors derided him for being a “second-hand hairy” (ermaozi)—foreigners were called “hairies” (maozi)—John insisted that he simply believed in God. Refusing to denounce his Christian faith, John was beheaded. In remembrance of these holy witnesses to Christ, the Orthodox Christians in China intone, “Give rest, O Lord, to the souls of your servants—Priest Mitrophan and those with him—and make their memory eternal. Amen.” 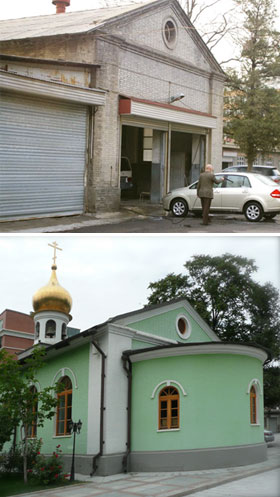 (Above) The Russian Orthodox Church of the Dormition of Most Holy Theotokos as it appeared in 2009 while being used as a garage for the Russian Embassy. (Below) The restored church as it appears today.
Many of the relics of these martyrs were saved, and by 1917 the Orthodox mission in Beijing had been rebuilt to include two churches, a tall steeple, and two monasteries. One of the mission churches was built on ground where many of the martyrs were slain, and was called Church of All the Holy Martyrs of Beijing. After the Bolshevik Revolution the Russian Orthodox mission in China confronted a new threat; was it the property of the Church, or could its status as Russia’s diplomatic mission in China be used as an excuse for the Soviets to claim the property? Deliberations and debates regarding who could claim ownership of the Russian Orthodox mission in Beijing continued long after the establishment of the People’s Republic of China, and the last two Orthodox Russians—Archbishop Victor and the monk Seraphim—were finally evicted from China in May of 1956. Shortly afterward, what remained of the Russian Orthodox religious buildings was either destroyed or reallocated for other uses. The dome and steeple of the Church of the Dormition were toppled from the roof, the icons and altar were pitched, and the space in which the Holy Sacrifice was previously offered became a garage for embassy cars. One might say that in 2009 a new page was turned for Russian Orthodoxy in China; it was then that Father Sergiy traveled to Beijing, becoming the first Orthodox priest to return to Beiguan since 1956.

Father Sergiy, from a remote part of Siberia, is accustomed to being in a country with so few practicing Orthodox Christians. His native Russia, which was almost entirely Russian Orthodox before the Bolshevik Revolution, today sees only 3 percent of its population attend Liturgy on a given Sunday. The anti-religious legacies of Lenin and Stalin have unfortunately left a more enduring mark on Russia than the early Party leaders of China. The church in the Russian embassy was handsomely restored and consecrated on October 13, 2009, and since then Father Sergiy has regularly celebrated the Divine Liturgy each Sunday at 9:30 am. Since Orthodoxy remains an unofficial religion in China, the Orthodox Liturgy may be attended only within the embassy church, and one must be placed on an authorized list and present a non-Chinese passport to enter the embassy compound. To appreciate just how the blood of the martyrs has begun again to take root in China, one must see a photograph of what the church looked like as a garage, and compare it to the church today; the transformation is astonishing.

I have said much here about the Russian Orthodox missionaries in China because they spilled their blood in martyrdom in 1900, along with their Roman Catholic brothers and sisters in China. Few Catholics are aware, however, that Eastern Catholics, too, have lived and worshipped in China. As Father Sergiy informed a Greek Orthodox visitor who was sharing tea with us, the only discernable difference between Eastern Catholics and Eastern Orthodox is that Catholics pray for the Pope during the Divine Liturgy (Eastern Catholics, of course, are in full communion with the Holy Father and Rome, unlike Eastern Orthodox). In the 1937 Jesuit-published A Guide to Catholic Shanghai, the Russian Catholic Chapel with a photograph of its spectacular iconostasis is featured on page 20. Eastern Catholic priests celebrated the Byzantine Liturgy in Old Slavonic there, with a burgeoning parish of some 260 Russians. Sadly, tensions between the Catholic Byzantine and Orthodox faithful exacerbated relations between the two communities in Shanghai, though today it is even more regrettable that neither the Eastern Catholic nor Orthodox churches are in use at all; I have walked by the old Russian church many times in Shanghai, and have each time lamented its current state of decay from long neglect. 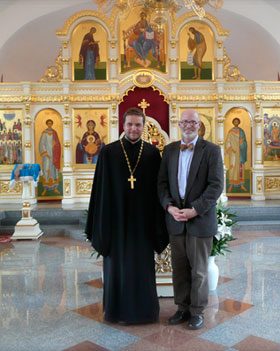 Dr. Anthony Clark & Father Sergiy Veronin in the Russian Orthodox church.
As difficult as it is to see once-thriving churches sit vacant, with high onion domes stripped of their crosses, one cannot help but celebrate the restored and growing church community at the Russian Embassy of China in Beijing. After a long visit to the church museum, I returned to the dining room, where Father Sergiy affectionately blessed the faithful as they departed. I thanked him for allowing us to attend Liturgy and visit his museum and library. And bowing down I too received his blessing, after which he said,“You’re on the list, so remember you’re always welcome here.” I remembered his note to me—“Christ is in our midst!”—and I silently thanked the holy martyrs of 1900 for their witness and continued prayers. Truly it is upon their blood that the Russian church is again able to worship the God of the ages, and raise the Cross of Christ in a city growing more fevered in its march toward materialism.

Thy 222 martyrs who shone forth in the empire of China held the Christian faith as a shield and did not bow down to idols. They accepted torture and death from their irrational countrymen and the lips of the passion-bearing youth cried: we consider suffering for Christ as nothing. We desire to obtain eternal life for this transitory life. Amen.

Dr. Anthony E. Clark10/2/2012 4:15 am
I am happy to see that you have reposted my article, which was originally published on Catholic World Report (www.catholicworldreport.com/Item/1614/christ_is_in_our_midst.aspx). I ask, however, that you include the entire article, as this version is edited; some sections are removed. I also ask that you cite the name of the author. I invoke the Blessed Theotokos, and continue to pray for your important work in God's Church. Your brother in Christ, Dr. Anthony E. Clark
×