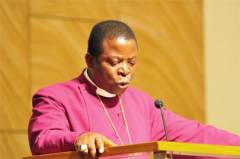 Nicholas Okoh
Christianity is an “endangered species” in Africa, pressed between violence from Islamist terrorism on one side and doctrinal and moral “disunity” among Christians on the other, a leading Nigerian Anglican bishop has said.

The Most Rev. Nicholas Okoh, the Anglican Primate of Nigeria’s 18 million Anglican Christians, warned the other African nations that doctrinal relativism, which he called “nominalism,” and the “doctrine of prosperity” – the idea that God rewards the morally upright with material wealth - are creating as serious a threat to the continuance of Christianity as Islamic violence on the continent.

theme: “Contending For The Faith.” He said that for Christianity to survive in Africa, all Christians everywhere must adhere to a common Christian faith in line with the Bible.

Okoh referred to the Islamic terrorist organisation Boko Haram, which has gone on killing sprees throughout Nigeria and is particularly known for attacking Christian worshippers at services at Christmas and Easter time.

“The Christian faith is seriously under attack in Nigeria from without and within,” he said. “From without, we are concerned about violent expressions of Islam represented by Boko Haram. In some parts of the North, the Christian faith is an endangered species.” He said that Boko Haram is a “faceless mafia” that is so violent that attempts to negotiate or “dialogue” become “academic.”

However, “disunity among Christians …exposes the Church to so many disadvantages,” Okoh continued. He went on to criticise the growth of “nominalism,” the belief that denies the existence of objective truth and leaves Christianity as a matter only of personal opinion. Nominalism in African Christianity, Okoh said, creates a faith “that is one mile wide and one inch deep, leading to distorted beliefs.”

The Church of Nigeria, a product of missionaries from Britain and dating only from 1842, is now the second largest branch of the Worldwide Anglican Communion, claiming the membership of over 18 million of the 140 million population of the country. It is estimated that of the 77 million-strong Communion, by far the greatest majority lives in the African and Asian provinces that have largely maintained strongly orthodox positions on biblical criticism and doctrine, as well as issues surrounding human sexuality.

At the moment, Okoh said, of all the Christian Churches, “Officially, only the Roman Catholic Church authorities are standing for historical orthodoxy.” He denounced the Episcopal Church in the US, saying that it has “no sentiments about Orthodoxy and the rest of the Communion.”

But Okoh was emphatic that Christianity is not a matter of personal preference, calling it instead, “something which is entrusted to God’s consecrated people.”

“The faith is something which is delivered to us. It is not something which we have discovered for ourselves. The facts of our faith are handed down to us from generation to generation a tradition, going back to Jesus Himself,” he said.

“The Christian faith is something which is once and for all delivered to us. There is something permanent and unchangeable about its content, but certainly to be rediscovered and appropriated in every age. It is this: Jesus Christ came into the world and lived and died to bring salvation to men.”

The shift of power in the Anglican Churches away from the Western and northern countries of their historic origin to the Global South and Asia has been dubbed the Anglican Realignment. In most of the Western nations the Anglican and Episcopal Church leadership has embraced a far-left “progressive” position, particularly with their acceptance of homosexuality and on the interpretation of scripture, a position that has created an intractable schism from their more orthodox counterparts. In these countries many conservative individuals, and often whole communities, have opted to secede from the oversight of their ultra-liberal leadership and this shift is causing bitter legal disputes over property rights. At the same time, these Western, liberalised communities are losing membership in such numbers that some have admitted they will effectively cease to exist within 20-30 years.

In related news, a group of Anglican bishops meeting in New Zealand has called for “one of their own” to be named the new head of the Worldwide Anglican Communion with the retirement this year of Rowan Williams as Archbishop of Canterbury. The Church of England is unique in the Communion in that its leadership is chosen not by other members but by Parliament. Until now, the titular head of the Church of England has been automatically accepted as the head of the whole Communion. Prime Minister David Cameron announced that the new Archbishop of Canterbury would be Justin Welby, the former bishop of Durham, who told media last week that he wants to rethink his Church’s position on homosexual relationships.

Some African bishops at the meeting of the Anglican Consultative Council (ACC) – one of the four “Instruments of Anglican Communion” – in Auckland, New Zealand have called for a change to that tradition of acceptance. The doctrinal divisions between the Realigned Anglican Churches and their ultra-liberal counterparts in the West, have become the focal point of much of the discussion at the Auckland meeting.

Church leaders from Nigeria and Kenya issued a statement at the meeting saying that since 1998, “the ongoing conflict in our beloved Communion continues to be a crisis of Gospel truth, not only regarding matters of human sexuality but the authority of Holy Scripture as the Word of God written and the unique and universal Lordship of Jesus Christ the Son of God.”

The ongoing crisis in the Anglican Communion, they said, is the result of a “failure of governance by the Instruments of Communion. This is a failure and, at times, subversion of leadership at the highest levels.”

They wrote that they are “grieved” that the ACC continues to “tolerate, and even honor” the US Episcopal Church, the Anglican Church of Canada “and other provinces who continue to produce revisionist forms of the Christian faith that are unrecognizable to the majority of Anglicans worldwide.”

“For this reason, we believe it is time for the Primates themselves to elect one of their own who will call their meetings with an enhanced responsibility to guard the Faith and Order of the Anglican Communion.”

Gregorios2/20/2015 5:34 pm
(At the moment, Okoh said, of all the Christian Churches, “Officially, only the Roman Catholic Church authorities are standing for historical orthodoxy.”)

Present day Roman Catholicism is far from Orthodox and very much fragmented within. The Latin Rite, the liberals, the conservatives, pedophilia among its leaders, etc...the believers within that fold are very much distressed as they should be...not at what is occuring in the world so much as what is occuring within their own church. He make a curiously subjective assessment of the Christian situation...has he never heard of the Orthodox Church?

Of course his brand of Christianity is very much endangered! In the end it will most certainly fail as all merely human constructs do and The Orthodox Church (the Church of Christ and His Apostles) will be the only Church left standing (visibly or otherwise).
×