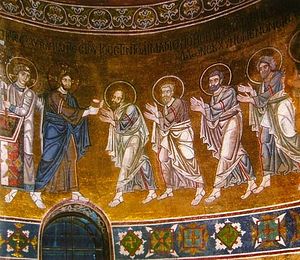 Families like to meet together for a meal. When the family is large and particularly close to one another, it usually develops this family meal into a kind of ritual. Most Americans find this most clearly expressed in the traditional Thanksgiving Dinner, held every year. The time and place are important for Thanksgiving Dinner, so too is the menu which must be built around certain meats—usually a big turkey—and certain other traditional dishes, such as cranberry sauce and pumpkin pie. Other ritualistic elements are usually developed when a family meets over a number of years for this traditional meal: certain persons have certain functions, definite places to sit, preparation rites are evolved into a strict custom, certain routines become traditional after the meal is finished. And when the afternoon is finished, everyone goes away back to his own daily round of living strengthened once more in the sense of oneness with this family. This conviction of unity and mutual support will bolster each person often in times of frustration or loneliness which come into all our lives. No family should be without a traditional meal. All of us, even those who cannot have such a gathering at Thanksgiving, know that this is true. Some families find that many more than one family meal each year is needed. And these families usually enjoy a unity and strength among themselves that is envied by others.

The Christian Family—the Family of God—also need their Meal of Unity. This need was well understood by Jesus Christ, and He instituted the Christian meal for all His followers. He did it very simply: He took bread and said, “This is my body.” Then He broke it and gave it to His followers to eat. He took wine and said. “This is my blood.” Then He gave it to them to drink. Then He said. “Do this in memory of me.” As the Apostles ate, they realized that they were becoming one with each other by Christ Himself entering into all of them. It is on this strength that they lived and gave witness to Christ all over the world. This meal and its effects on the Christians who ate of it immediately fulfilled the prayer which Christ said to His Father on that same night: “That they may be one Father, in you and you in me … that they may be one in us.” From that day until now, Christians have always met together in the traditional Breaking of Bread.

Christians, too, over the years have evolved a thorough ritual as the setting for this traditional Meal of Unity. Orthodox Christians in particular have developed a preparation rite, the Eucharistic Prayer, the Epiclesis, which invokes the Holy Spirit to “descend upon us and these gifts here spread forth” and to change the bread and wine into the Body and Blood of Jesus Christ so that the Orthodox Faithful may break this Bread of Life and receive it unto themselves for the “remission of sins and Life Everlasting.”

Christians who come together for this Eucharistic Meal should come carrying the gifts which they want to contribute. In early Christian days each one did literally carry gifts to the Altar, much like Aunt Jane brings a casserole or Uncle George brings a bottle of wine to Thanksgiving Dinner. Nowadays the preparation of gifts is done in our Churches through one representative of the whole assembly, the Priest. who brings the bread and wine to the Altar in the Great Entrance. Each of us, though, should give our lives and our sincere dedication to Christ’s way of life while our representative is preparing the Gifts. The meal which we are readying on our Altars is, after all, OUR meal. OUR Breaking of the Bread. Of course, the Priest has the main function during the meal, because he is specially Ordained with the Grace of God to represent the community to God, as well as representing Christ before the community. But our function is also evidently meaningful; we come forward and eat from the Breaking of the Bread. We, like the Apostles, realize that all the assembly eating from this Holy Banquet are partaking of the same Christ which is filling us. We move back to our places with a sense of deep unity growing within us and all around us. There is a togetherness in this which penetrates us. There is a strength in this which fills us with a sense of power. There is a solemn conviction in this which makes us feel more and more Divine. We join together with all Orthodox Christians in this Breaking of the Bread … but we join with Jesus Christ in the deepest sense of our being. All of us are one, not only together, but in Christ.

When a family leaves a Thanksgiving Dinner, they are strong against frustration and loneliness. When Orthodox Christians leave their Eucharistic Meal of Unity, the Breaking of the Bread, they have a deep conviction that they are all joined together in a renewed commitment to witnessing Christ in their own world. At the end of the Gathering, the Priest says, “Let us depart in peace, let us pray to the Lord.” Surely this is clear truth. We indeed depart with Christ in us. We go in peace, the peace which Christ alone can give. We go to take Christ into whatever work is ours. Christ goes with us — with each of us, with all of us — and we know that large numbers of Orthodox Christians eat of the same Bread, and live on the strength of the same Jesus Christ. The more we eat His Flesh and drink His Blood, the more life, His Life, we have in us. And that life vivifies our actions till they become obviously and powerfully Christian. We witness Christ to others — individually and all together. Never will we be alone again. Together with countless other Orthodox Christians we are doing Christ’s work. Christ working through us will remove all frustration. He will make our lives successful. If today’s Orthodox Christians gather frequently for the Breaking of the Bread of Life, then people will say what the Romans said of the early Christians — and a touch of envy will be in their words: “See how they love one another.”

Pavel12/1/2014 4:43 am
In my sixty plus years in the United States I have found that various waves of Russian refugees, exiles, and expatriates, all approved of the American tradition of Thanksgiving Day as soon as they found out about it, even the religious old women who would only tolerate other aspects of American culture. A wonderful custom!
×