Who was St. Edmund? 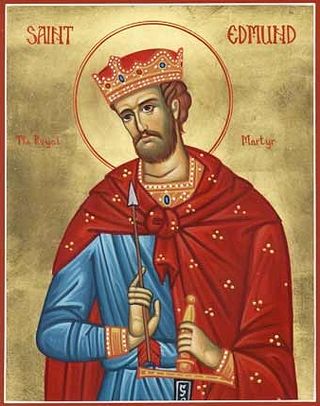 Edmund the Martyr was crowned King of East Anglia in 855 or 856 and was venerated as a Martyr Saint soon after his death at the hands of Danish Vikings on 20th November 869. This date remains St Edmund’s Feast Day today.

The story of his martyrdom was recorded for us by Abbo of Fleury, who was Abbot of the Benedictine Monastery at Fleury-sur-Loire in France. He spent two years in England assisting Archbishop Oswald of York to restore the monastic system in the later years of the tenth century and during this time he wrote his “Life of St Edmund” at Ramsey Abbey, which is near St Ives in Cambridgeshire.

Although Abbo’s account was written over a hundred years after St Edmund’s death, he states that he heard the story of King Edmund from Archbishop Dunstan, who had been told it as a young man by a very old man who claimed to have been the King’s armour bearer at the time of his death. It is therefore accepted by scholars as an accurate account of the facts.

According to Abbo, Edmund—a Christian—ruled “wisely and kindly”. When his lands were invaded he raised an army and fought “bravely” but they were eventually overwhelmed by the size of the Danish “pagan hordes”.

Edmund was captured by the Danes at Hoxne, on the River Waverney. He was offered terms for surrender but, finding that they conflicted with his Christian beliefs, he rejected them. The Danish leaders then had him tied to a tree and whipped before shooting him carefully with arrows until he resembled a “thistle covered in thorns”. He was then beheaded and the head thrown into brambles in a nearby wood. It was later found by the survivors being guarded by a wolf and calling “here, here here!”

Edmund was buried where he died at Hoxne, but some thirty years later his remains were moved to a monastery at Beadeoriceworth, now better known as the place which bears his name - Bury St Edmunds—in Suffolk.

martin m mbaka8/12/2019 11:31 am
i like the brave man st Edmund. i am totally inspired by the live of this brave st i baptized i son after.
st Edmund guide my son throughout his live and may you pray for us.

Edmund Joseph Kiwenge6/20/2019 3:19 pm
I'm inspired by the life of St. Edmund the martyr. I would like to know more about him and if possible I may be offered opportunity to visit his grave. I believe his prayers have been of great help to the success of my life. St. Edmund Pray for me.
×