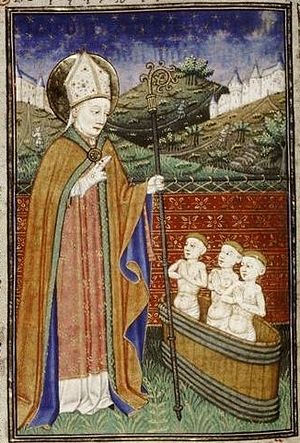 Attributed to the Fastolf Master in France, Saint Nicholas with Three Children in a Pickling Tub (MS. Auct. D. 2. 11, fol. 50v), c. 1440-1450, tempera colors and gold leaf on parchment. Bodleian Library, University of Oxford
On this day, the 19th of December (December 6 according to the Julian calendar), the Church celebrates the memory of one of her most beloved saints—St. Nicholas the Wonderworker of Myra and Lycia. We are half way through Advent, the fast preceding the feast of the Nativity of our Lord Jesus Christ, born as a babe to the Virgin Mary. This is a time when we especially delight in the beauty and sanctity of children—defenseless, dependent, yet meaning everything to us. We would do anything to protect a child, even die ourselves, because we see in him God’s gift of our own eternal existence.

Appearing in the middle of our preparation for Christmas, St. Nicholas also exemplifies love and protection of children. In fact, he has come to be known as the “Protector of children”.

In western religious art and more rarely in Orthodox iconography, we see St. Nicholas with three children at his feet, looking up to him as their protector. This depiction comes from the story in St. Nicholas’s life of how he resurrected three youths by his prayers. According to Orthodox tradition, three theological students were travelling to Athens to study. A wicked innkeeper robbed and murdered them, hiding their remains in a large pickling tub. St. Nicholas the bishop of Myra and Lycia happened to be travelling in the same direction, and he stopped at the very same inn. That night, the crime was revealed to him in a dream. Horrified at this heartless act, St. Nicholas prayed fervently to God, and the youths were restored whole, resurrected to life.

In France, the story is still told today of three little children who were lost and captured by an evil butcher, who murders them. St. Nicholas appeared and poured out his prayer to the Lord, Who returned them to life and to their bereaved parents.

Another incident of St. Nicholas’s miraculous protection of a child happened long after his death. The townspeople of Myra were celebrating St. Nicholas of the eve of his feast day when a band of Arab pirates from Crete came and stole treasures from the Church of St. Nicholas. As they were leaving town, they captured a young boy, Basil, to make him a slave. The emir, or ruler, selected Basil to be his personal cupbearer. Thus, for the next year Basil waited on the king, bringing his wine in a beautiful golden cup. Basil’s parents were devastated at the loss of their only child, and the year passed slowly, filled with grief. When the next feast of St. Nicholas’ arrived, Basil’s grieving mother was too saddened to join in the festivity, which only reminded her of last year’s tragic loss; but she was persuaded to have a simple observance at home—with quiet prayers for Basil’s safekeeping. Meanwhile, as Basil was fulfilling his tasks serving the emir, he was suddenly whisked away. St. Nicholas appeared to the terrified boy, blessed him, and set him down at his home back in Myra. Imagine the joy and amazement when Basil amazingly appeared before his parents, still holding the king’s golden cup.

These are only the greater-known miracles of St. Nicholas’s intercession for the safekeeping of children, but there are many, many more that have either not been recorded or occurred in more recent times. One example was told by a woman from Thessalonica who came to the monastery of St. Nicholas on the Greek island of Andros and told the monks that one day, while walking to church with her four-year-old son, the child was attracted by something in the road and letting go of her hand, darted into the busy street. A huge truck was approaching, and just before it hit him she screamed out for St. Nicholas. After the truck passed over her son’s body, she ran terror-stricken into the road, expecting to find him dead. Instead, he stood up seemingly unscathed, and when she asked him if he was hurt he said matter-of-factly, “Oh no, the old grandfather covered me in the road.”

Yes, we all know that St. Nicholas has morphed in Western minds into Santa Claus, that jolly giver of gifts to children, and knowing St. Nicholas’s generosity toward the little ones it is no wonder why. But why did St. Nicholas give the bags of gold to the three maidens, whose father was ready to sell them into shameful slavery? The saint by this act of generosity was saving something more precious even than their lives—he saved their eternal souls from sin.

So, St. Nicholas is protector of little children and youths first of all from evil—the evil of adults, who are responsible for their own evil plans. He is the protector of all from the evil one, who works through us weak humans. But lest we forget something very essential to this work of salvation—we have to pray to the saints. How quickly and wondrously St. Nicholas came to the aid of a weeping, praying mother, returning her beloved Basil from slavery to a foreign ruler! How beyond our comprehension was the restoration to life of three innocent young victims to their parents, who were undoubtedly pouring forth their prayer to the Lord for their little ones! And what was the first cry uttered by a terrified mother on her way to church but a plea to St. Nicholas! Let us never forget this very important point. The Lord has filled the hearts of men and women with strong, urgent love for their children. Our prayer for them is the ultimate expression of this love—greater than any gifts or outward displays of affection. And should the Lord see fit to take our children to Himself, our prayers for them do not cease, for all are alive in the Lord.

Throughout the Orthodox world you will find such fervent love and veneration for St. Nicholas because he has always speedily answered the prayers of those in need. His boldness before God is strong—and his great love for the innocent surpasses our understanding. It gives us hope and the desire to pray: that our beloved children remain unharmed, and the evil one be forever put to shame.

Kathy Jo11/26/2020 6:21 am
First, I want to say that I have always believed in God but I had really never experienced God. I'm not a good Christian and I fail him daily, now that being said I have always strived to do the right thing and always be kind. I have sometimes failed at this as well but I am never intentionally cruel and I always apologize if I hurt someone. I never imagined that our Good Lord would need me because I am not worthy. I have nobody to turn to and I now face something I feel certain God wants me to act but I don't know how or who to trust and I already have the devil on my heals and I know time is short. I appreciate your time and I pray that I am reaching out to the right people. Like a great martyr who came about late in the 60's and they destroyed him and I and the world misjudged and persecuted this man. I am still crying about what we all have turned a blind eye to and the devil is more messing with people's lives than anyone really understood.
×