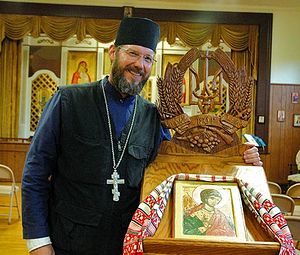 Members of St. Michael's Ukrainian Orthodox Church lost many things in the fire that ravaged the Harris Avenue building in November, but what they haven't lost is their faith or the sense of community that makes this small parish a family.

Gone are the pews, the Bibles and many of the vestments worn by clergy.

The two-alarm blaze burned through a floor in the church and nearly burned out a support beam on the granite building.

Still, the parish hasn't missed a beat, showing its strength and resilience as events and services not only continue, but grow throughout the holiday season.

The choir loft, where the church choir normally sings through the weekly Masses, has been replaced with a slightly raised stage in the church hall.

The church held its annual Cookie Walk last weekend, and the event was the parish's largest yet, bringing in thousands of dollars needed to restore the 1942 building.

"We didn't slow down at all," said the Rev. Anthony Perkins.

The same day as the fire that nearly destroyed the church, parishioners left a chaotic scene filled with firefighters and reporters to hold a quiet ceremony in the chapel.

The Sunday following the fire, services were simple, as families gathered in a rather empty church hall, which the parish normally uses for special events.

By the following week, however, a group of the faithful had created a makeshift altar, bringing in the church's remaining artifacts and decorations to create a new worship space.

"When they came in and saw it on Sunday, it was good to see the joy on their faces," said Perkins. "It's a strong community. People love each other, they work together and it was a hard time."

The building, known for its unique Eastern-style architecture, topped with twin gilded spires, has since been secured. Holes in the roof and burned out windows have been covered. Total restoration of the church is expected to take more than a year.

The hall is significantly smaller than that church space, normally used by 100 families that attend St. Michael's, but they don't seem to mind.

"People have remarked that because it's a closer space and you have the choir right there, that it does feel a little more intimate," said Perkins. "Logistically it's difficult, but as far as services go, I actually added more, because what you want to do is sanctify the space through prayer and worship."

And it's not the first time the hall has been used for worship. The church was built in the 1940s, after Orthodox members split with St. Michael's Ukrainian Catholic Church on Blackstone Street. During construction, regular Masses were held in the hall.

Now, the space will see its busiest season to date, accommodating everything from the parish feast to the choir concert throughout the Christmas season.

"It's going to be crowded, but that's OK," said Perkins.

The Orthodox church held its Feast of St. Nicholas on Sunday, Dec. 19. The more religious, traditional Christmas celebration won't take place until Jan. 6, however, since the church follows the Julian calendar.

A full lineup of events including vigils, Bible study and a food pantry, will continue through December and early January. But it's more than just their ongoing list of services that makes St. Michael's strong.

"As a pastor, one of the things you work for is unity and being one healthy family," said Perkins. "If you have the stress of a fire or some other kind of accident and its not a healthy family, it will just tear it apart."

On the contrary, Perkins and other members of the parish see miracles where others might find tragedy, and are quick to list positive things that have come out of the incident.

On the ceiling of the church, for example, parishioners point out that a fresco depiction of St. Michael, the patron saint of firefighters, remained untouched by flames. The fire took place the morning after a vigil held in honor of St. Michael's Day, and Perkins credits local firefighters for saving many of the church's valuable artifacts, including a tabernacle, a chalice set, and a hand-carved wood stand with a painting of the saint.

"They were just so kind, so helpful and so efficient," he said.

As for that long-standing rift with the Catholic sect on Blackstone Street, Perkins says the fire has helped to heal some old wounds.

"That parish has just been so helpful," he said. "A lot of parishes have come out to help us, but they were the first."

The first Sunday after the fire, the neighboring church took a collection and donated $1,000. The once estranged Ukrainian parish is still collecting more and is holding a fund-raiser for the Harris Street building. The church has offered Perkins the use of their space, even saying they could change the time of their services to accommodate the parish.

The donations are appreciated by a parish still facing a long process for full recovery.

"The insurance is going to put us back in the building, but it won't make it like it was before," said Perkins. "We'll need money now to make sure the beauty of it is restored." Original fresco paintings destroyed in the fire will be expensive to replace.

Perkins added that despite the tragedy, new members are always welcome to the parish, and he emphasized that you need not be Ukrainian. In fact, the pastor himself has no Ukrainian ancestry. Raised in Georgia as a Methodist, Perkins came to the church not long after he was called to duty as a member of the Army Reserve following the Sept. 11 attacks. He was sent to Woonsocket by an Orthodox bishop in 2007.

"We love newcomers," he said. "We love seekers."

Those new to the church are generally surprised by singing that accompanies the services.

"People are generally struck by the beauty of it."