Getting to Know the Virgin Mary 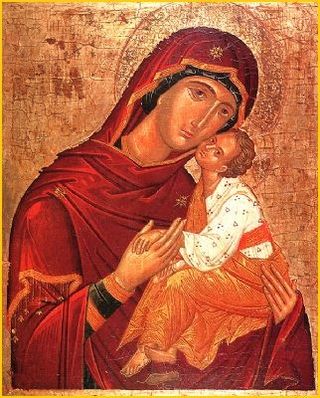 During my conversion to Eastern Orthodox Christianity, I had myriad experiences that sat in stark contrast to the nondenominational, Protestant faith I had carried since childhood. One of the most challenging things to grasp was the apparent prominence of the Virgin Mary in the Church. Other than what I could glean from some familiar Bible verses, I hadn't known Mary at all. I had only even seen her during Christmas and Easter plays, where she stood in the backdrop, saying little. I had a fragmented idea of who she might have been, but no clear picture of who she was.

Orthodox Christians (like many from more liturgical traditions) just plain love Mary. And they aren't shy about it. In fact, you can't miss her. Every time I go to Church, there she is, larger than life: in a giant icon right above the altar, with Jesus in her womb and her arms outstretched to either side. Not only that, but the choir sings to her every Sunday. And the priest asks her for her help and prayers, calling out to her as if she is right there with him in the sanctuary, standing next to Jesus. It jarred me at first. Was that kind of thing in the Bible? Did the early Church really think of human beings like that? And why are we talking to her in the present tense? It all seemed quite weird. I was griping about the whole struggle with Father Stephen one day when he diffused the tension with his typical gentleness, "She is a person," he said, with a smile, "Not a theological concept."

OK, I'd thought. Mary was a person. I can't argue that. But it's not like she's with us now, right? Wrong. The Bible itself talks about being surrounded by "a great cloud of witnesses" (Hebrews 12:1). The faithful men and women who have gone before us are, in a mystery, hemming us in with their prayers, which help us "throw off everything that hinders us, and the sin that so easily entangles us" (v. 2-3). And who better to help me bring my requests before the throne of the Incarnate God than His mother, who carried Him in her womb, held Him in her arms, and kissed His face when He cried?

Not long after that realization, I was chatting with a good friend and fellow sojourner to Orthodoxy before Church when we stopped to look at an icon of Mary near where we were standing. He smiled at her and said, "Yep. That's Mom." That stopped me in my tracks. I got chills as I remembered Jesus' final order of business on the cross before giving up His spirit: When Jesus therefore saw His mother, and the disciple whom He loved standing by, He said to His mother, "Woman, behold your son!" Then He said to the disciple, "Behold your mother!" And from that hour that disciple took her to his own home. (John 19:25-27)

Why had I not seen this before? The Early Christians did love and honor Mary as a mother, because it was on the heart of Christ for the Church and Mary to take care of one another. It was simple, it was true, and acting on it began to change my perspective. I began to look at her and remember the words of Jesus Himself, "Behold your Mother!" Seen in this light, loving Mary, honoring her, and asking her for help makes perfect sense. We have all loved and honored our mothers, or those like mothers to us, constantly leaning on them for support.

Relating to the saints, whether it's asking for their prayers, or greeting them with "psalms, hymns, and spiritual songs" (Ephesians 5:19), is an exciting journey within a journey for a Christian. This is especially true when getting to know the Virgin Mary as our Mother through Christ. As I've heard several priests put it: she is not the great exception; she is the great example. Her acceptance of the will of God ("I am the Lord's servant, let it be done unto me according to your word", Luke 1:38) should inspire us. A single act of faith and humility allowed for God to work the great miracle of the Incarnation in the womb of a humble girl from Galilee. Because Mary offered her humanity for Christ to take on, our flesh can now be sanctified and saved.

As His Mother, Mary has a tender relationship to God that we can learn from and emulate. Caring for and loving Jesus, mourning His death, and celebrating His life and resurrection; Mary's simple, deep love for her Son is woven throughout the Gospels. We get a glimpse of this intimacy in a beautiful excerpt from Luke: "And all who heard it wondered at the things which were told them by the shepherds. But Mary treasured all these things, pondering them in her heart" (2:18-19).

Just as she treasures the chance to be close to Jesus, it is evident for anyone who looks to her that Mary loves all of us as her children through Christ. Countless times throughout Church history, she has intervened for the faithful with the aid of her intercession, comfort and consolation, right up to here and now.

This Christmas, I have the opportunity to be surrounded by family, familiar and new. And as I reflect on the Nativity, I am so thankful. In his calling me to take care of and love His mother, the Lord welcomes me as His family, allowing me to abide in Him and with Him.

Wishing you all good news, great joy and His Peace this Christmas.

Julia Stepanova1/8/2013 6:15 pm
Thank you Beth! Hopefully it will help those who are learning the Orthodox Christianity and straggle to understand why we ask Theotokos for her prayers and intercession and the proper respect she deserves. I'm Russian Orthodox. My fiancee is not Orthodox Christian. He is studying Orthodoxy and has problems to understand my prayers to the Virgin Mary. He believes that we only pray to God. I will forward this article to him. May God help him to understand!

Ben Marston12/31/2012 3:04 am
As a convert to Orthodoxy from a charismatic brand of evangelicalism, the discovery of the Theotokos is among the greatest treasures I have been privileged to find. Her prayers are so effective and bring graces to me that would have otherwise failed.
Loving Her is a great way to love the Lord. She is our Mother, and also the Ark of the New Covenant. As it would have been unthinkable for Israel under David to go to war without the Ark of the Old Covenant, the same applies to us who are of the New- The Mother of God is the Ark of the New Covenant and in rallying to her in battle, we rally to the grace of God in Christ; as the angel said "Hail, Mary, full of Grace."
×