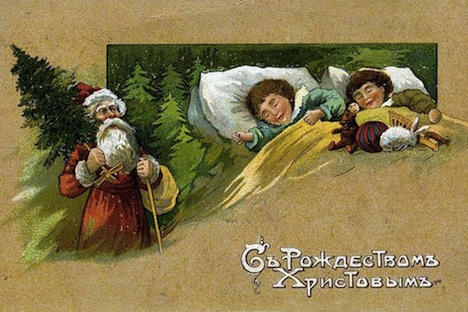 The population of St. Petersburg, the capital of the Russian Empire, consisted of social strata nested within themselves like Indian castes. It was only a few times each year that the tempos of their lives – be they high society, factory workers, servants, students, Germans or paupers – converged.

Because four-fifths of the city’s population were Orthodox believers, and because Catholic, Protestant and Orthodox holidays were very close together on the calendar, New Year’s and Christmas – the second most important Orthodox holiday after Easter – were celebrated by almost all of St. Petersburg's populace. The advent of Christmas marked the beginning of Christmastide – a season that lasted until Baptism (from Dec. 25 to Jab. 6, according to the old style).

Christmas was a family holiday, mostly for children. On Christmas Eve, every self-respecting newspaper carried Christmas stories and verses in which the hero is miraculously saved from danger on Christmas Day.

Petty officials and clerks snapped up practical jokes, in order to play pranks on their friends, cousins and mothers-in-law: for example, a “bottle of perfume” would turn out to contain plain water that spilled all over the recipient of the gift; matches that lit themselves; little imps jumping out of candy boxes…

Christmas dinner included an ostrich sitting on eggs: its body made from a coconut, its neck from a banana, its head fashioned out of a small apple with holes for eyes and its beak made from an almond… A guidebook wrote that “few inhabitants of the capital celebrate Christmas without a partridge or a traditional goose.”

Every self-respecting family also put up a Christmas tree. The custom was borrowed from the Germans and became popular in St. Petersburg in the 1830s, before spreading across Russia. The Christmas tree decorations were brought from Germany in huge quantities, ahead of Christmas.

The decorations piled at the foot of the tree were given to all the invited children, and the sweets, tin soldiers, fruits and nuts hanging on the tree were handed out as prizes to winners of trivia, anagrams and countless other games.

Families attended the festive mass and returned to a lavishly spread table. Numerous toys were recovered from under the Christmas tree.

From morning, children from poor neighbourhoods visited the flats of the well-off. They congratulated the owners, gave praise to Christ and accepted gifts – typically small change, a few kopecks per person. Among those who came with Christmas greetings were local constables, chimney sweeps, church-bell ringers, garbage collectors, and attendants from Turkish baths. They were treated with vodka and given some money.

Christmas in the Emperor’s family was very much the same, except for the number of Christmas trees (one per each family member) and the fact that gifts were presented not only by adults to children but also by children to their elders. And, of course, the value of their gifts was different (jewelery, arms, paintings, china).

For a long time, the New Year was not a holiday but an ordinary workday. However, rural folk celebrated St. Basil’s Day on Jan. 1. That saint, the Bishop of Caesarea, was the patron of pigs – so, on New Year’s, people all over Russia ate sucking pig.

By the beginning of the 20th century a New Year’s ritual was established in the capital. Jan. 1 was regarded as a time for looking back on the previous year.

On the other hand, the night of New Year's was the time when unmarried young people in the city let their hair down. It was very pleasant to enter a restaurant or an inn, to escape St. Petersburg's dank weather. Fancy dress balls were staged at the Noble Assembly and the Suvorin Theatre.

The winter holidays lasted two weeks. During this time, Christmas tree parties were held in all the public spaces for the pupils attending the city’s schools. During the day, they lit up a huge electric fir-tree and children under the age of 10 received free gifts.

After the New Year came time for fortunetelling for young maids. Of course, the rituals were all aimed at attracting bridegrooms: they gave barley grains to roosters, melted wax, dropped slips of paper with the names of potential bridegrooms in a bowl of water and made use of mirrors.

Christmastide ended with religious celebrations for Epiphany Sunday. On Jan. 6, Orthodox believers went in their masses to “Jordan” (places on rivers, canals and lakes where they were baptized in the water). Processions carrying a cross started out from many churches and ended at the water’s edge: holes were cut in the ice for the ritual and chapels were built near these spots. Thus, Christmastide would come to a close.

Note: Russian New Year is on Jan. 1, but Russia has always dated Christmas as Jan. 7, in common with the rest of the Eastern Orthodox Church.

The article is abridged and first published in Russian in the Ogoniok magazine.

Marianne Hart1/1/2013 12:23 am
Just one negative comment to this delightful story. The Russians ate "suckling" pigs, not "sucking" pigs. Same thing, really, but the term is "suckling."

I wish we could return to pre-WWI days in the way life was possible, and I enjoy reading about it. The world is so evil now, or so it seems to me.

Ake Eldberg1/1/2013 12:09 am
What about bell ringing? I've always had this inner image of Russia with hundreds of churches ringing their bells, making an incredible noise on New Yesr's eve or maybe Christmas.
×