Many evangelical groups today are proposing that we abandon “traditional” models of “being the Church,” and instead replace that stodginess with what is presumably a more “New Testament” model: that of the “house church” or “cell church.” Essentially, they are promoting that the local Church be a de-centralized assembly, meeting in the homes of various individuals, proportionally scattered throughout a city. The presumption is that this is the “Biblical” model for both fellowship and discipleship, being derived from the New Testament itself. 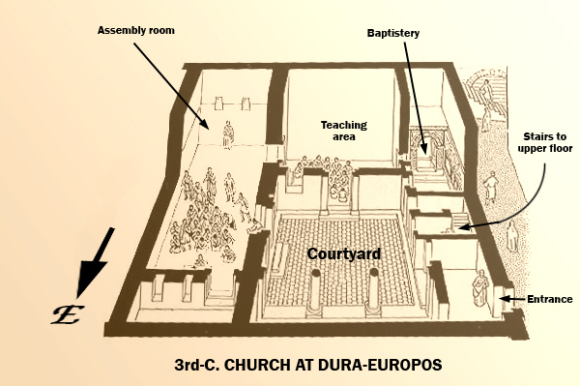 While we certainly read of “house Churches” in the New Testament (e.g. 1 Cor. 1:11,16; Rom. 16:5; Col. 4:15), typically being the homes of wealthy individuals with enough room for a large assembly of people, the house/cell churches of today do not actually resemble the worship or piety associated with these New Testament prototypes. Beyond this, the house Churches of the New Testament eventually developed into the basilicas of the post-Constantine Roman empire, when the faith was no longer forced “underground” as the result of periods of sporadic, imperial persecution. The same elements present in the earlier house Churches found their way into the more established basilicas and temples of the 4th century and beyond; they were just given a newer and freer context.

Archaeology has shown that the typical large home of the period could accomodate about fifty people for a meal, ten in the triclinium (dining room), where the guests reclined on couches, and forty in the atrium (courtyard), where the guests sat around a central pool.
Jerome Kodell, The Eucharist in the New Testament, p. 75

This description corresponds with that of the two oldest archaeological finds of ancient house churches — those at Megiddo (Palestine) and Dura Europos (Syria), which both date to the 3rd century AD (early-to-mid 200s at latest). Both churches-within-households had a place for baptism (like the central pool mentioned above), an area for the general assembly of people, and a small area for the Eucharistic rite itself (often an elevated platform with a table/altar). A large, mosaic inscription in Greek at the Megiddo house church reads: “The God-loving Aketous has offered this table to the God Jesus Christ, as a memorial,” a seemingly obvious reference to the Eucharist, given the words “table” and “memorial.”

It gets even more interesting at Dura Europos, where the extensive discovery has yielded not only abundant examples of Iconography throughout the house church structure (e.g. frescoes of Christ as the Good Shepherd, Christ walking on water, the Samaritan woman at the well, and the myrrh-bearing women at the empty tomb), but also some fragmentary manuscripts in the Hebrew language that show a continuity with the Eucharistic liturgy of the first century Didache and the more developed Apostolic Constitutions. A Greek-language “harmony” of the Gospels (in fragments), that is distinct from the Diatessaron, has also been found at this site.

The Eucharistic anaphora in the Didache, which has been dated as early as AD 50-60, reads:

Thou, O Lord, Almighty, hast created all things for the sake of Thy name, hast given food and drink to the children of men for enjoyment, but to us Thou hast granted spiritual food and drink for eternal life through Jesus, Thy servant.
For all these things we thankfully praise Thee, because Thou art powerful. Thine is the glory forever. Amen.
The Didache, 10

The Hebraic fragment uncovered at Dura Europos also includes an anaphora, and it has a strikingly similar composition:

Blessed be the Lord, King of the Universe, who created All things, apportioned food, appointed drink for all the children of flesh with which they shall be satisfied; But granted to us, human beings, to partake of the food of the myriads of his angelic bodies. For all this we have to bless with songs in the gatherings of [the] people.
Fragment A, Dura Europos (circa AD 235)

Despite being separated in time by at least two centuries, the anaphoras of both the apostolic Church in the first century, and that of this Syrian house church in the 3rd century are strikingly similar. They certainly reflect the same tradition of the Eucharist, and, as Irenaeus has asserted, the Eucharist is where the heart of our faith and theology begins (and ends). Similarities between these and the Judaic blessings for food and wine should be noted, as well. The Christians of both the Didache and 3rd century were certainly assembling in the large homes of wealthy believers, but the detailed instructions for the rites of Baptism and the Eucharist in both sources indicates a community gathering for a purpose that is quite distinct from a simple Bible study, lecture, and sing-along.

So while evangelical groups in our present day might be attempting to emulate the house churches of the “New Testament” church, it can be demonstrated with great clarity that these ancient Christian communities were gathered together primarily for the celebration of the Mysteries of Christ: Baptism and the Eucharist. Incidentally, I wouldn’t expect to find any Iconography in a present day house church, either.

If a Christian today wants to assemble in a way that is comparable to these ancient and “New Testament” era house churches, the best way to do so is within the apostolic Church itself, where these traditions have been preserved for centuries; and that church is the Orthodox Church.

From:On Behalf of All. Used with permission

Reuben1/14/2014 10:28 pm
A very interesting article and worthy of consideration. It is hampered by remarks such as these: "a seemingly obvious reference to the Eucharist", "demonstrated with great clarity" This kind of evidence suggests and hints, no more.

George Mims1/14/2014 6:40 am
Frankly, this is an essential NEW look to an OLD way of doing the Body of Christ assembled to teach, baptize, preach, celebrate the Holy Communion.....and in spaces designed for each of these VERY DIFFERENT gatherings. We've been talking about this in the Episcopal/Anglican Church for a LONG time and done little to activate this in our building of new church's where there's no absolute tie to the past edifices and ways of gathering.