God the Father is All-Good. St. John of Kronstadt 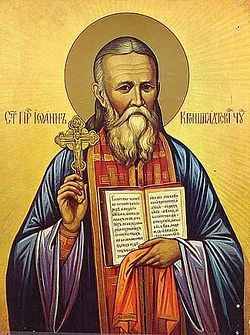 Holy Righteous John of Kronstadt.
Today as we also prepare for the feast of the Nativity of Christ, the Russian Orthodox Church commemorates our holy righteous Father John of Kronstadt, the great man of prayer. Father John’s prayers were so effectual, so clearly earth-moving that it causes us to wonder. This was a man who lived to threshold of the twentieth century. Our great-grandparents, even grandparents could have known him had they lived in Russia. This portion of a leaflet on St. John of Kronstadt written by Bishop Alexander (Mileant) sheds light on Father John’s living philosophy of prayer, and how such prayer can work miracles.

Let us concentrate our attention on how Father John expresses his Christian teaching about God the Father. How often God the Father is presented as distant from the world! In philosophical religious teachings about God the Word, or Logos, it is explained in another sense, that God the Father, as the Absolute, is not equal with the relative world, and therefore cannot have direct contact with it, and consequently, is in need of an intercessor between Himself and the world, and that such an intercessor is God the Word, God the Son (Son of God). Such an outlook, incidentally, was expressed in the philosophical system of Vladimir Soloviev. This view penetrates often also into our common religious ideas: God the Father, living in unapproachable Light, has reserved the right for this same reason to be remote from this earthly world and from us people. In a similar manner, the thought of the remoteness of God the Father from people is felt in the Roman Catholic teaching about atonement (redemption) where the redemption of mankind with the Blood of the Son of God, is explained by the necessity of appeasing and satisfying God the Father for His being insulted through the sin of man.

"God, Father of the Word, is also our benevolent and loving Father. When saying 'The Lord's Prayer,' we must believe and remember that the Father in heaven never forgets and will never forget us, for what earthly father forgets or does not care for his children? Remember that our Heavenly Father constantly surrounds us with love and care, and not in vain is He called our Father—this is not a name without meaning and force, but a name with great significance and power." "Should we not recognize Him as all the more benevolent, because He gave ... the greatest gift of His benevolence, wisdom, and omnipotence - by this is meant freedom.... not being shaken by the ingratitude of those who received the gift, in order that His goodness could shine brighter than the sun before everyone? And has He not shown by His deeds His boundless love and unlimited wisdom by bestowing upon us freedom, when, after our fall into sinfulness, and our withdrawal from Him, and spiritual ruin, He sent into the world His Son, the Only-Begotten One, in the likeness of perishable man, and gave Him to suffer and die for us?"

"Christian! Remember and constantly bear in mind and in your heart the great words of the Lord's Prayer: 'Our Father, Who art in the Heavens.' Remember Who our Father is. God is our Father, our Love: who are we? We are His children, and among ourselves, brothers; in what manner of love ought children to live among themselves, having such a Father? If you were children of Abraham you would have done the deeds of Abraham; what kinds of deeds must we do?" "Our life is that of love - yes, love. And where there is love, there is God, and where there is God, there is all-good... And so with joy feed and delight everyone, please all and depend in all things upon the heavenly Father, the Father of mercies, and God of all consolation. Bring to your neighbor in sacrifice that which is dear to you..." And so, we see Father John converts the fundamental dogmas into immediate moral admonitions; he shows that every truth of Faith contains in itself a moral purpose.

Father John, in his theology about the Father teaches, first of all, about divine thought. "From God's mind, from God's thought, proceeds every thought in the world. In general, everywhere in the world we see the kingdom of thought, as in all the structure of the visible world, so also, in particular, on earth, in the rotation and life of the earthly planet, in the distribution of the elements of the world: air, water, fire, whereas other phenomena are distributed in all animals, in birds, fish, snakes, beasts, and in man, in their wise and purposeful formation, and in their capabilities, morals, habits; in plants, in their adaptation, in nutrition, and so on; everywhere we see the kingdom of thought, even in the inanimate stone and sand."